The fit as a fiddle 80 years old 2nd Man On The Moon wore TWO watches, when asked why by our smart alick tv guy; my hero answered, "I have TWO arms!" Ha ha ha...

You will notice Buzz still wear the watch that went to the moon :)

After seeing Buzz still wearing his trusty Omega Speedmaster chronograph, I went and look at mine.

Yes, I have a watch like Buzz but mine has never been on the moon ;) It has been hibernating in a drawer for years and only see daylight once or twice a year. I prefer my Rolex GMT Master which I do not have to wind. 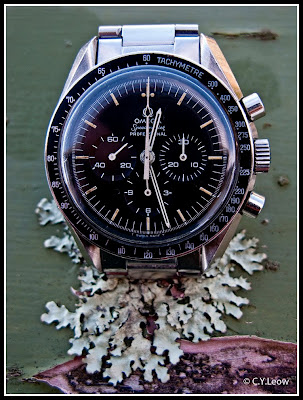 That is my Speedy, bought for me by my beloved father in 1972. Still in great condition! Until I try to adjust the time! This is what happen! 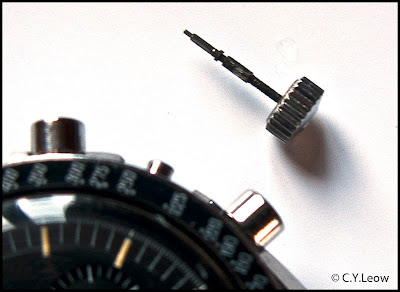 The winding crown came right off!

I pack up the Speedmaster and head for Capital Watch Services in town.

Turn out that the winding crown is easily fixed, a loose screw it seem!

And since the case back of the moon watch is off, I might as well take some shots of the movement with my Canon G9.

I was hoping my Speedmaster movement is a calibre 321, the original moon watch carry that movement! Nope! Mine is a 861. The 861 has less part than the 321 and cost less to make. Shame on you Omega! 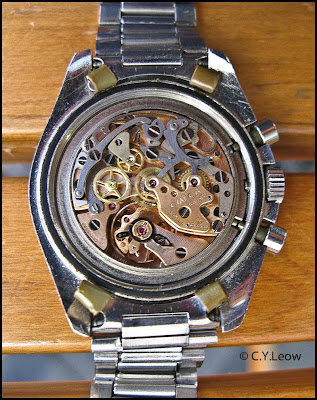 Isn't that 861 movement a thing of beauty?

I left my "Speedy" at the shop to get a quote for a complete service and changing to a new dial face and hands. I went home happy :)

A lot has been written on the Omega Speedmaster moon watch. The indepth.watchprosite part 1 and part 2 on this chronograph is a must read!

If you Google "Omega Speedmaster" you get a whopping NINE MILLION hits!

For a timepiece that has been tortured by NASA to be certify as a moon watch, that is only to be expected!

So what did NASA did to the poor watch?

"Well, they baked them (up to 200 degrees Fahrenheit) they froze them (to zero degrees Fahrenheit) they soaked them (95% humidity steam bath) they oxidized them (pure O atmosphere- that's right, boys and girls, pure oxygen is very reactive and will break chemical compounds down - why do you think antioxidants are good for you?) they jolted them (six 40-g decelerations, in six different directions. They should have printed, "maladjusted in six positions" on them) and simulated a sustained seven and a quarter g takeoff; they decompressed them (hard vacuum, and then for good measure they baked them again while they were at it; ninety minutes of both at up to 200 degrees Fahrenheit again). Just for grins, they vibrated them at up to 2000 Hz and then, for some reason, they blasted them with sound at 130 db (about as loud as the front row at a very, very loud rock concert. Hey, it was the sixties.) " - Quote from "The Right Stuff: Inside the Omega Speedmaster Professional by Jack Forster.

Email ThisBlogThis!Share to TwitterShare to FacebookShare to Pinterest
Labels: Watch

Why would they need a watch on the moon? It`s not as if they have a bus to catch or have lunch and tea breaks like we do.However,after reading this, I`m determined to get a new strap for my watch, I feel like the odd one out with you and the man on the moon wearing a watch on each arm.

Whats the point in having a watch that works on the moon unless you plan on having a holiday there next summer? nope no doubt my watch doesnt work on the moon but it goes just fine on earth at a fraction of the price!