A friend pop in to my work place to see me and being a very enthusiastic photographer himself, we somehow talk about our favorite lenses!

I told him he is so lucky to own the latest Nikon 14-24mm f2.8G ultra wide zoom, I lament when I was with the media; my favorite lens was the Canon 14mm f2.8 ultra-wide.

I was thus shock that he reckon the 14-24 was a terrible lens and is "not very sharp, hard to compose; the sales guy said it is because of the curvature of the lens!" He also believe an ultra-wide is no good for landscape or scenery shots!

Where he got those misleading notions from? As far as I know the new Nikon 14-24 is the BEST rectilinear ultra-wide, even when you zoom to it's 14mm range; the lens is virtually distortion free! Straight line remained straight! Who ever gave my friend those "fact", SHAME ON YOU!

In parting, I promised I will post some of my best 14mm shots... 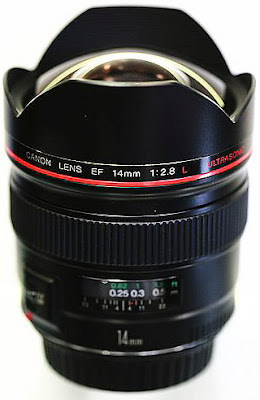 Mind you, ultra-wide lenses like the 14mm are the most difficult lenses to use effectively.

Ken Rockwell advice in his blog:
"To get good results, you have to force yourself to get closer and closer, and push the subject out to the edges. If you don't push yourself, all you'll get is a tiny subject lost in the middle of the frame.

Ultra wide lenses have nothing to do with "getting it all in;" that attitude is the best way to get the worst pictures." 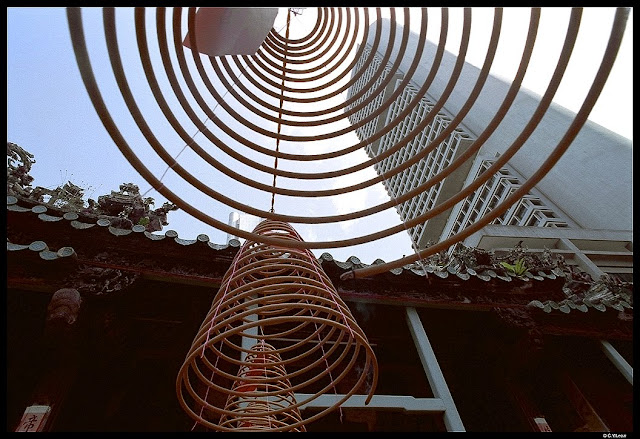 Circular jossticks in a Singapore Chinese temple with a backdrop of modern apartment.

My good friend Leo Foo have some invaluable information of this ultra-wide lens in his Canon FD Resources page, he also used one of my shot to illustrate the page. 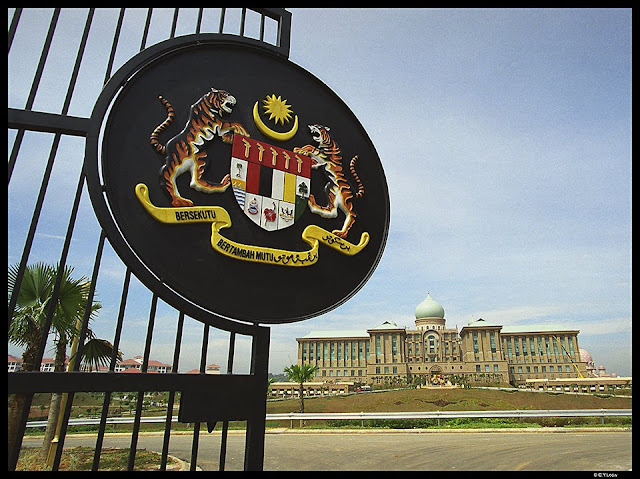 Gate of Power...
I was going to get a shot for The Star's "Soul of Our Nation" book of the new Putra Jaya Prime Minister Office. Alas the guard at the gate refuse to let me in, well; that turn out to be a blessing of sort... I shot with a 14mm Canon EF lens framing the building with the emblem of Malaysia on a half open gate.

Leo Foo has this to say about the 14mm ultra-wide:
"The objects therefore seem much farther apart than they really are, creating an elongated perspective. Because of this perspective, even a slight difference in shooting angle or position will cause a great difference in how the subject appears." 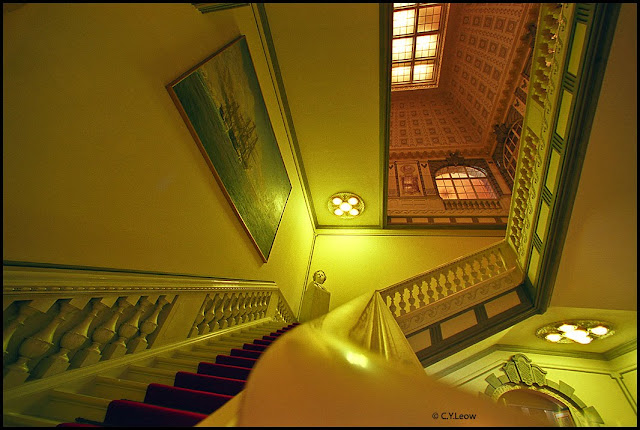 The Stairs...
Shot in Copenhagen, Denmark; the extended perspective and the 114° diagonal angle of view gave the picture a tremendous feeling of depth! The eerie warm room light gave the atmosphere a haunted feeling :) 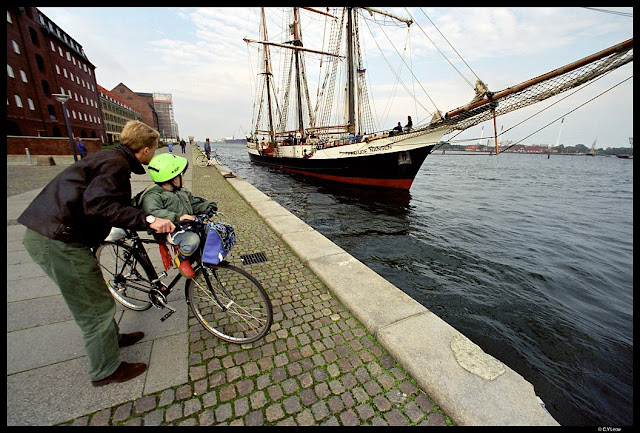 I am sailing...
Father and son admiring a boat setting sail in Copenhagen harbour. They were so absorbed by the yatch that they never noticed me running from ten yards away with my camera and captured their moment barely 6 feet away from them!

Leo Foo has this to say about the 14mm and I quote:

It's not easy to master the 14mm lens but once you have familiarized yourself with its optical characteristics, that's where the excitement begins.

Even those who are familiar with other wide-angle lenses may find this lens difficult at first. The photographer must have in mind some creative ideas on how to exploit the extreme wide angle of view and the exaggerated perspective. After that, experience is the best guide. 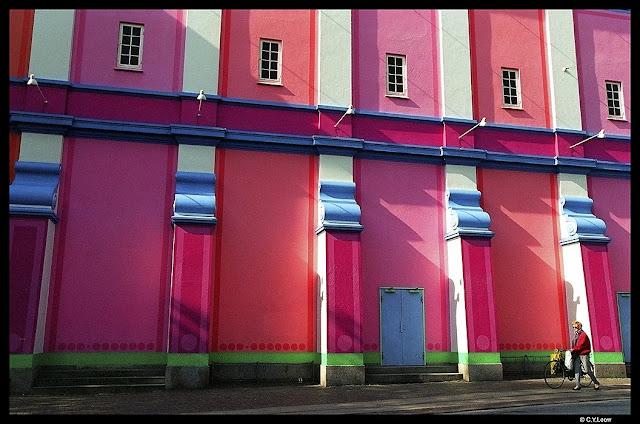 The Pink Building...
I was staying for a day in Copenhagen, Denmark with the Kodak Photokina group.
I went for a walk myself, saw this shocking pink colour building... something is missing, then she came along in a colour-matched jumper and pushing a bicycle to complete my shot! Talk about luck! Canon EOS1, 14mm f2.8 lens on Kodak Ektapress 400 film. 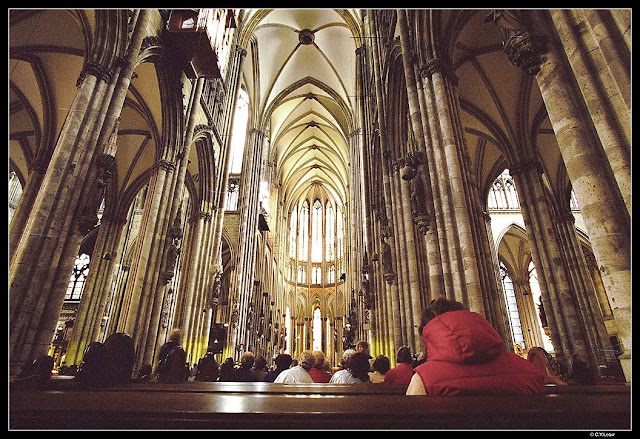 Woman In Red...
We were visiting the majestic Dom in Cologne, Germany. I saw her bright red parka against the medieval columns, the light in the cathedral was really dim; I rest my Canon EOS1n on the pew and exposed for a "long" half second. The 14mm super-wide was set at f8 to get enough depth-of-field.

In term of sharpness and depth of field, Leo Foo said:
"Another optical characteristic of super wide-angle lenses is their great depth of field. When using short focal length lenses with the focusing ring set to infinity, virtually everything in the picture is in sharp focus. Consequently, super wide-angle lenses are not very useful for isolating your subject using an out of focus foreground and background." 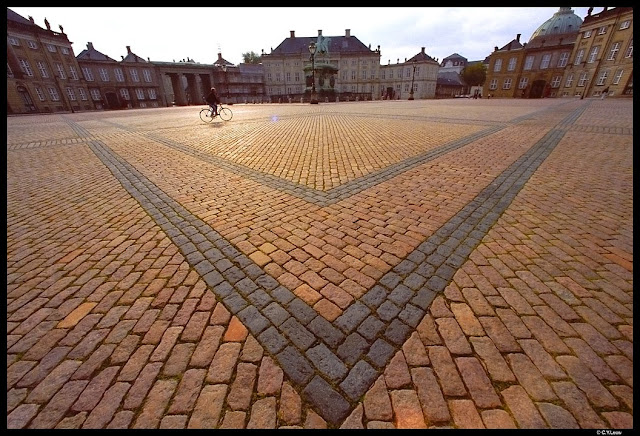 Brick Square...
A super wide shot of a brick square in Copenhagen. Texture of the bricks were enhanced by the back lit, low setting sun. The lone cyclist completes the composition. Canon EOS1 EF 14mm f2.8 lens. Kodak Ektapress film. 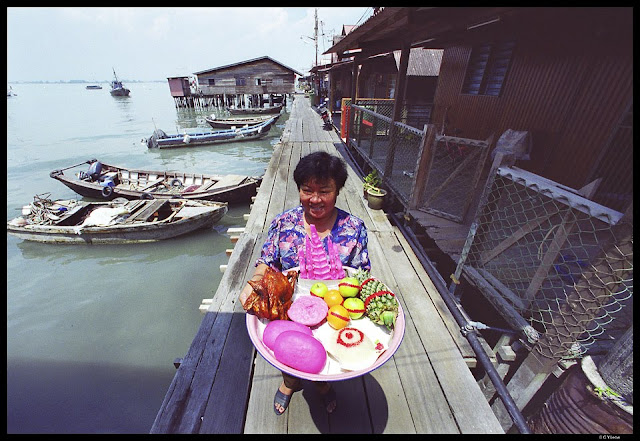 Jetty Prayer...
A traditional offering to the God of the sea during the Nine Emperor God festival in Penang, Malaysia.
Local fishermen believe that the yearly ceremony will being them back saftly from sea.
This shot was done for the book "Soul of Our Nation" published by The Star. A ladder was used to get this shot with a Canon EOS1n and 14mm f2.8 lens on Kodak Ektapress 400 film.

On framing a shot with the 14mm, Leo Foo advised:"When framing a shot, the photographer's attention is generally occupied by the main subject, and the surrounding areas tend to be overlooked. When the finished picture comes back, it is often not what the photographer had expected. It is important, therefore, to check the entire field of view before taking the picture to make sure that there are no unwanted objects intruding at the corners or distortions around the edges."

I couldn't say it better! Thanks Leonard!

The Trump Tower in New York, I love the 14mm for architectural shots, see how I framed the Tower with two other buildings? Only the ultra-wide can do that easily. 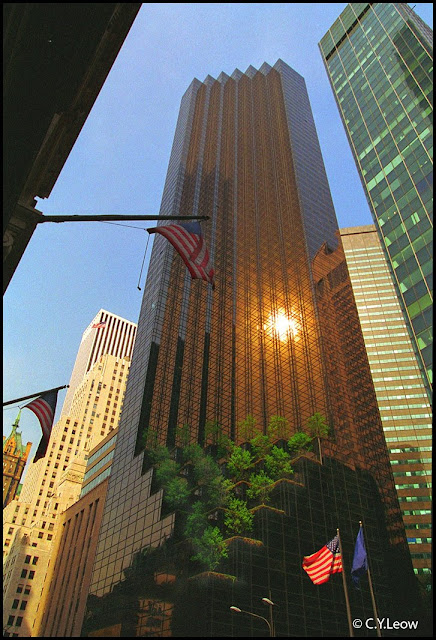 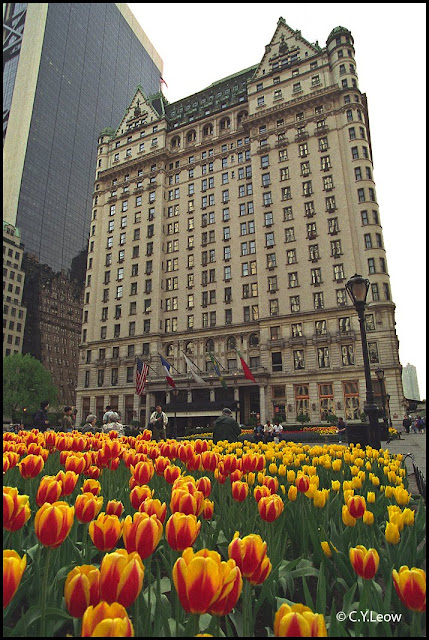 The famous Plaza Hotel in New York, I used the field of tulips as a foreground, the immerse depth of field rendered sharpness from one feet to near infinity! 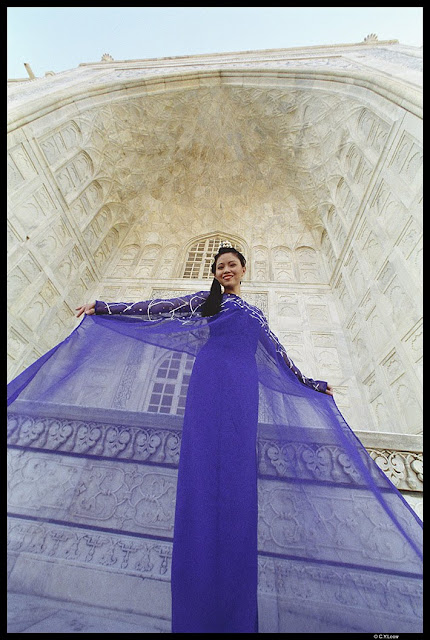 One of many India fashion shots taken for a Singapore paper. The backdrop is the arch of the magnificent Taj Mahal which we were NOT suppose to pose model with! We covered her outside the Taj in blanket and took her to our location without much problem. After the shoot we took her out the same way until the sixth time we were caught and got thrown out!
Shot the picture lying flat on the marble floor with Canon EOS-1, 14mm f2.8 lens.

Famous Last words from Ken Rockwell:Ultra wide lenses have nothing to do with "getting it all in;" that attitude is the best way to get the worst pictures.

He wrote a very useful article on "How to Use Ultra-Wide Lenses", a good read! 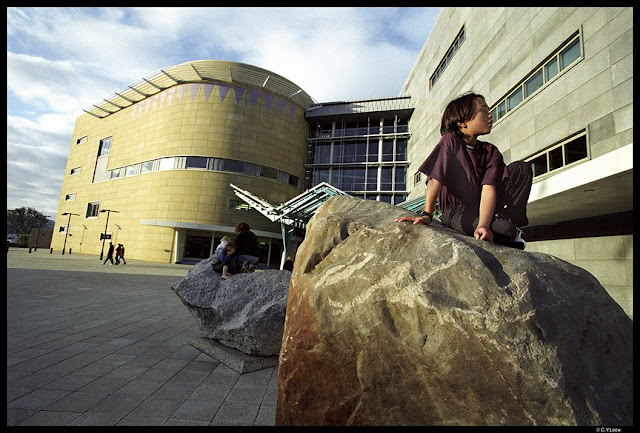 My family and I were leaving the very impressive Te Papa Museum in Wellington, New Zealand, we had an enjoyable day there.

We walked pass the two huge boulders placed in front of the building, the low setting sun really brought out the rock's texture. Then I saw this young Maori boy on top!

What a composition. I composed quickly and got just one single shot with my Canon EOS1n and EF14mm f 2.8 lens.

If you own one of this incredible glass, take it out from hibernation and go and shoot some pictures! Like yours truly and thousands of photographers, you will discover eventually your best pictures are almost always shot with the ultra-wide! Viva 14mm!

I can see now why you need to use different lenses.You have made the very unphotogenic Te Papa look photogenic.Bravo and well done!Its the first time I`ve seen the building NOT looking ugly.
How intriguing is that staircase photo! I thought it was a shot of going DOWN the staircase till I looked a little closer.It looks like an optical illusion. The colour adds to the mystique too.
What is that bright pink food on the lady`s plate?is that the real colour of the food?
Love the brick paving,, it`s much more aesthetically pleasing than boring old concrete.
The old church looks amazing..like a larger version of old St Pauls in Wellington,