Olympus OM-D, Retro Out Of Control? 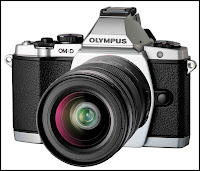 The word "retro" derives from the Latin prefix retro, meaning "backwards" or "in past times" – particularly as seen in the words retrograde, implying a movement toward the past instead of a progress toward the future, and retrospective, referring to a nostalgic (or critical) eye toward the past. - Wikipedia

The last few years it seems, everyone are trying to jump on the retro bandwagon; manufacturers somehow think their retro products can sell better!  In camera manufacturing, the-mother-of-all retro must belong to Olympus, in 16 June 2009 they show off their retro baby; the camera is reminiscent of the Olympus PEN half frame film cameras and is marketed as the Olympus digital PEN.