Soul Of Our Nation - Indian Community 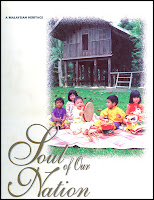 INDIAN presence in this region can be divided into two distinct stages both of which involve the exchange of people, goods and philosophies albeit in varying proportions.

The Malay peninsula's initial association with Indian culture dates as far back as the fifth century. These ties were predominantly related with commerce. However, the last 160-odd years, and by far the most significant period of migration, was basically tied in with the export of labour.

While earlier Indian contacts with Malaya were motivated by individual needs,the consequent movement of Indians to this country during the 19th century was to serve the interests of their colonial masters.

The most significant wave that influenced the face of Malaysian Indians till this very day commenced with the influx of manpower in the 1830s, when Indian labour, rumoured to have started with convicts, were brought into the country to work firstly in the sugar and coffee plantations and, later, rubber, tea and, eventually, oil palm.