After my comment on the front page photo of the Sunday Star Times, a reader hiding behind "Anonymous" said...

Hey, just wondering when you're going to apologise to the photographer. It wasn't a jack-up at all ... the girl has been quoted as saying she wanted to "play in the earthquake" and the photographer got lucky. If your gonna dish dirt you shld have the grace to apologise - September 13, 2010 8:12 PM

I did a search and discovered that the Sunday Star Times published a follow-up to the story saying:

"LITTLE MYRO McKee became the face of the Sunday Star-Times earthquake coverage when she featured on the front page last weekend.

The five-year-old was pictured in the rubble by Christchurch photographer Jane Wyles, a shot that prompted some readers to complain it was staged or sensationalised. It was neither." 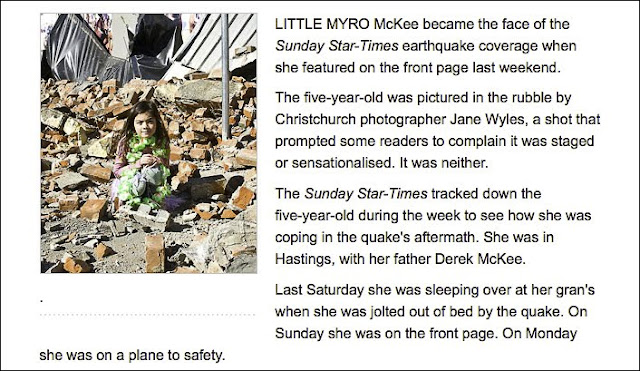