In September at the 2016 PHOTOKINA, Panasonic announced 4 new 4K capable cameras, the compact DMC-LX10, the Hybrid Bridge camera FZ2500, the G85, a DSLR look alike system camera and a mock up, not yet completed, super duper, advance system camera the GH5.

My interest was with the DMC-G85 which inherited the same 16 MP, AA filterless sensor of the more compact GX85 which I reviewed and love.  As a matter of fact, I almost bought a GX85 until I found out what the G85 have and the GX85 do not!

I was trying to get the G85 from Panasonic New Zealand for a review, there was a nearly two months delay because someone else was having the camera. Also, some oversea reviewers discovered there was a "jitter" or "jump" during video filming.

Panasonic have to come out with a new firmware update to fix that jitter problem and again that delayed the reviewing a bit. 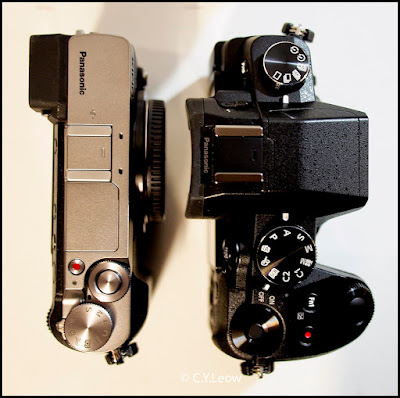 The photo on the left show the "range-finder" styled, compact DMC-GX85 and the much thicker and taller "DSLR style" DMC-G85.

Apart from being bigger, the G85 have more dials and buttons than the GX85.

However, the most important difference that G85 got and GX85 do not are...