A Blast From The Past!

Just two days ago, my colleague Simon was lamenting to me about his dad and his BRONICA 120 camera.

Ahh.. the good old Bronica, sure bring back some fond memories! I still remember I read with sadness in 2004 when TAMRON announced that they are discontinuing the Bronica camera range.

But first let me tell you how I got bitten by the 120 bug.

I started mucking around with photography while I was in form 4, my classmates the Ooi Twins were photography nuts and they must be from a rich Alor Setar family because they were using an EXAKTA 2b 35 mm SLR!

That camera cost as much as a car!

Did you know that this queer camera's film wind is left handed and it have a build-in KNIFE that can slice your film for you? 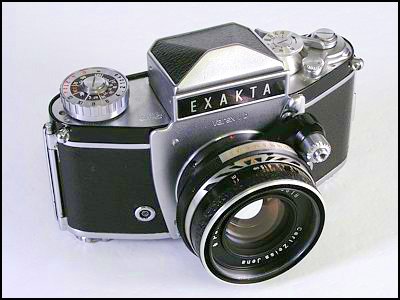 Now it just happened that the Ooi were also using a ZEISS SUPER IKONTA 120 folding camera and they wanted to get rid of it. I became the proud new owner.

The truth is I did not use that camera as much as I should, shortly after acquiring it my dear father sent me to Melbourne to further my study; he bought me a PENTAX SV SLR with 55 mm f2 lens which I simply adored and ran hundreds rolls of film through it.

So through my high school life in Melbourne I was mainly shooting 135 films and transparencies, It was not until I went to study Illustrative Photography at the R.M.I.T. till I got acquainted with 120 again. Looking at the photo above, after the Zeiss Ikonta I got a MAMIYA PRESS SUPER 23 with a 6X9 film back. This range-finder beauty will put nine shots on a roll of 120 film. It even got a limited movement bellow at the film plane that allowed some perspective correction!

My love affair with Mamamiya... oops... Mamiya continues when I joint The Star as their first Photo Editor in 1974. We bought the work horse RB67 and two lenses plus 2 film magazines. This was the camera I used for all the colour coverage. Man! The camera and lenses
weighed a ton! But when you are a reckless 23 something and having fun... you never thought that it will come back and bite you in the knee!

It was also at The Star that we bought a HASSELBLAD 500 CM, the Rolls Royce of 120 camera. Believe you me, that 80 mm f2.8 Planar lens is something else!

I once did a freelance job for a Christians Meet in Penang, they wanted a longish shot of the 300 odd participants at the Han Chiang school field, in black and white; then printed on 10X24 inch paper.

Playing safe, I had TWO cameras on two tripods for the shoot. Both the Mamiya RB67 and the "Hassy" were loaded with kodak Plus-X ASA 100 films. When the prints came out of the "soup", was I stunned! Even though the RB 6X7 format is larger than the Hassy 6X6; the sharpness was no where near to the corner to corner pin sharp rendition of the Zeiss Planar lens! 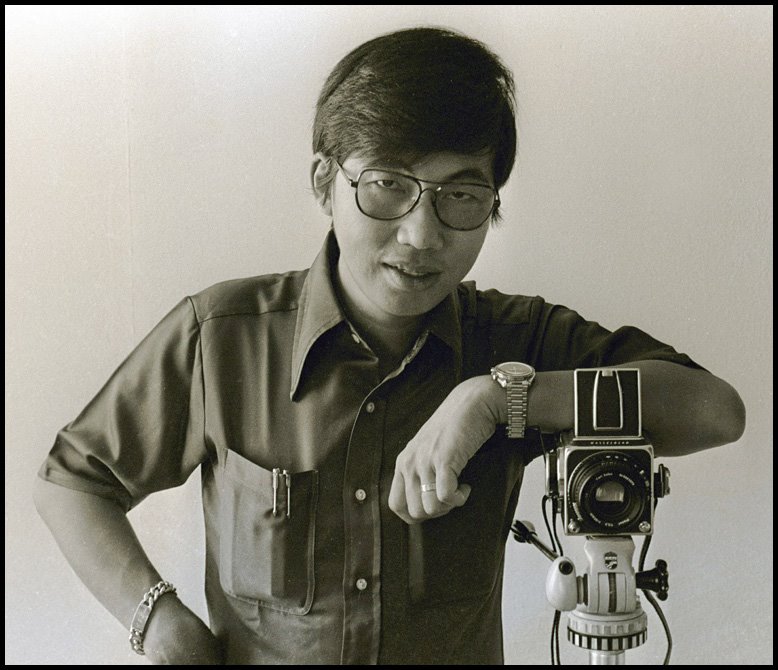 In 1979 I was with the New Straits Times and even though this was the number one paper, the photo dept only have a Bronica S2 120 camera with ONE lens! It was used for SPECIAL project and I used it ONCE.

Rummaging through press clippings through the years, I found the 1980 NST calendar that I contribute THREE pictures to! All the shots were done in Penang. One of the script was a road side market stall, sound simple but the preparation! 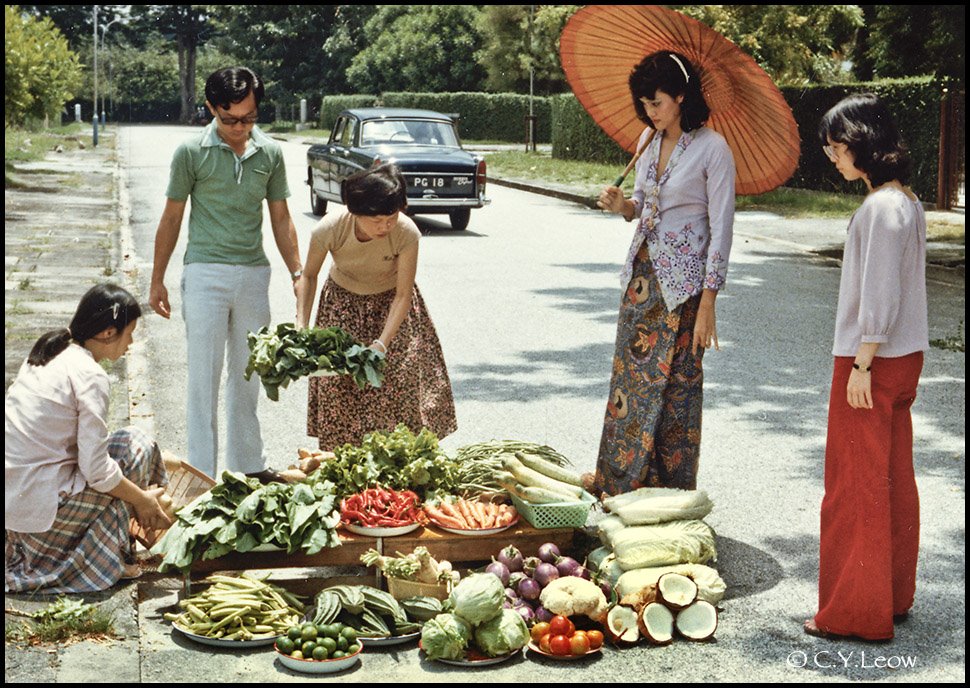 Prop and more prop! Cathie Khoo, center; the NST Creative Manager arranges the vegetables with her art dept staff for the shoot. Our pretty model Sharon was holding an umbrella. Location was a lane beside the Pulau Tikus market in Penang. Look at that car with PG 18 plate! 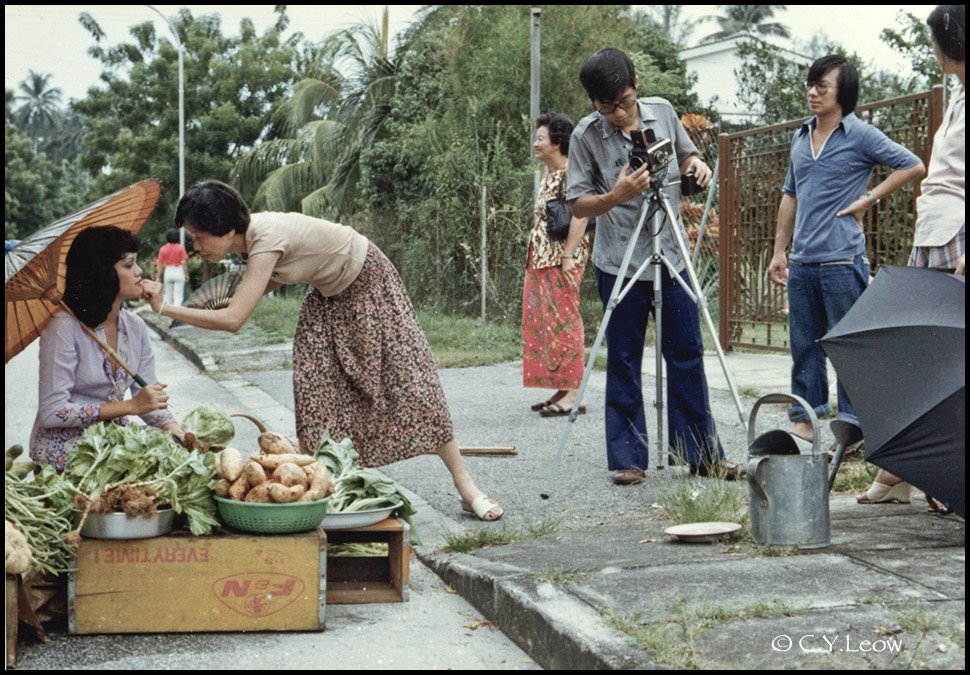 Miss Khoo did some final touch-up on our model’s face while I adjust the Bronica S2.

Boy was the S2 a NOISY camera! During exposure Bronica made it’s instant-return-mirror go DOWN under the camera instead of up and coupled to a HUGE 120 FOCAL PLANE SHUTTER, the whole camera literally went into CONVULSION when you released the shutter! For sharp pictures, a steady tripod is a MUST! Here I got the monster restrained on a light yet super study LINHOF tripod. 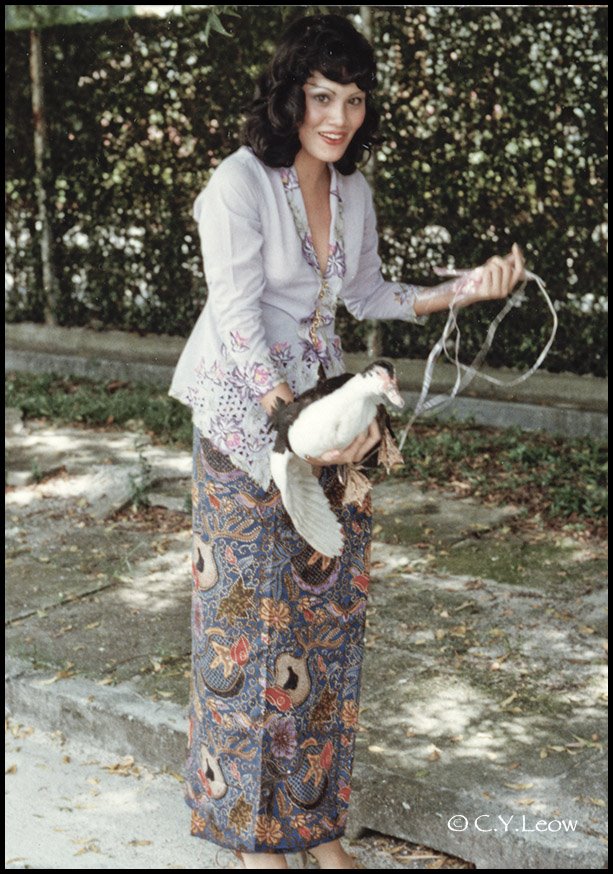 Our pretty model with one of the prop, a duck that we HIRED from a stall at the market! No animal were harm during or after the shoot :-) 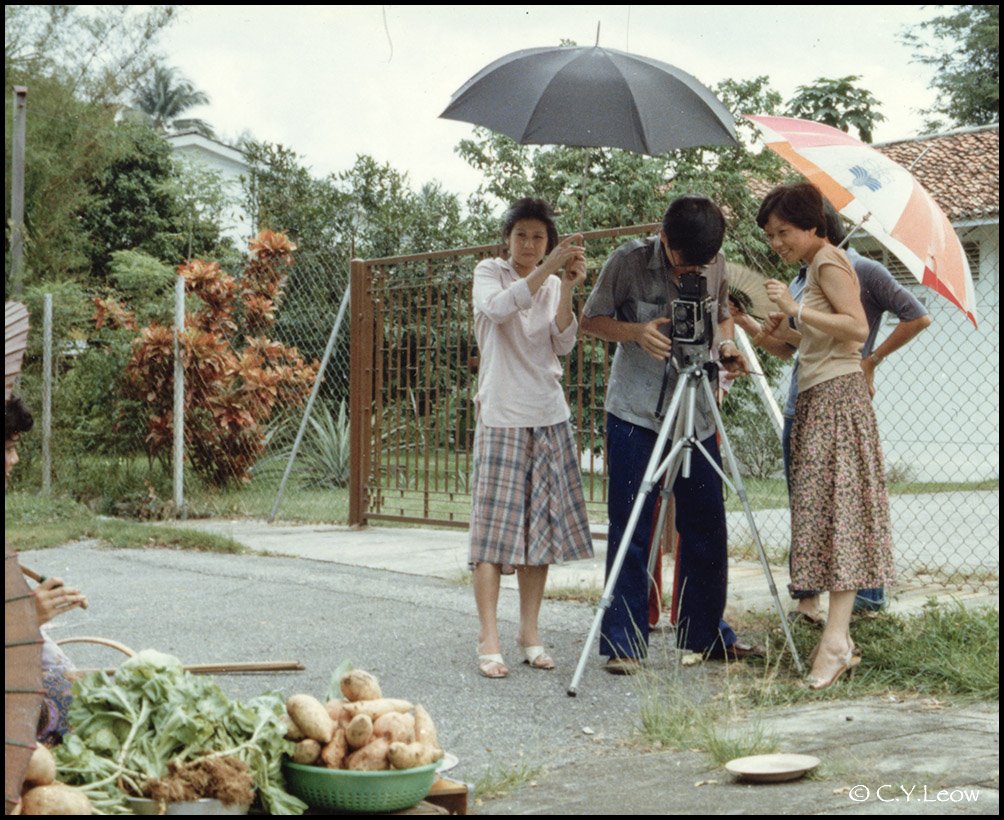 In this picture you can see yours truly being pampered by all the umbrellas ladies. See the Mamiya 220 TLR I was using? Man was it HOT to shoot in Malaysia, notice my shirt all drenched? Look at the result! Taken and printed in 1980 and the colour saturation is still as vibrant and true! You must be wondering what happened to the QUALITY printing in NST? I remembered in the 80s, NST won EVERY Kodak printing awards and that Kodak Award is no joke; you gotta Be the FIRST CLASS printer! What happened after that? Go figure! ;-(

Some of the more observant surfers will notice our model has on a different dress? Goes to show how LONG we put in this shot! 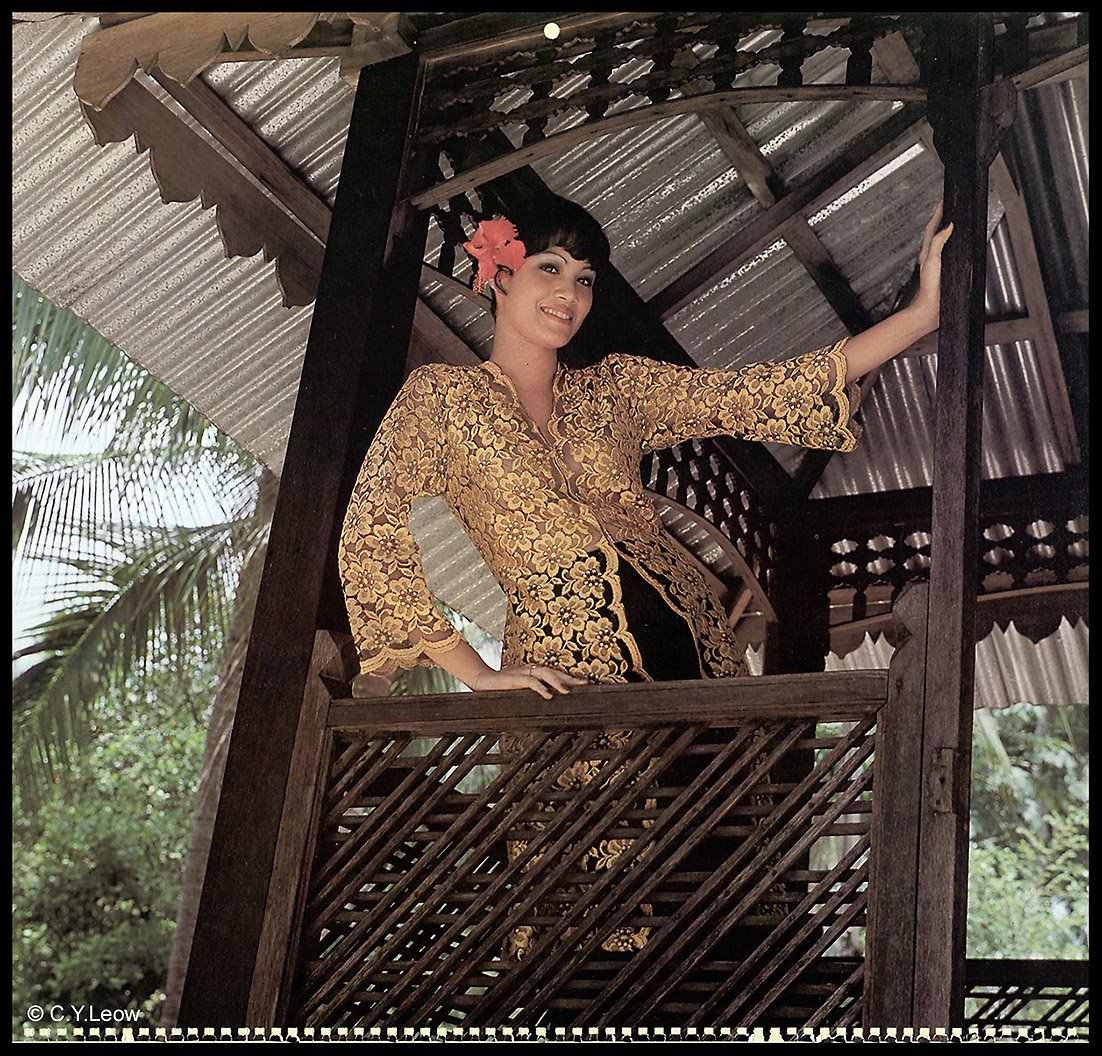 Another shot for the 1980 NST Calendar, taken at a kampong house in Penang... love the color, love the detail. The Bronica S2 might be noisy but that lens is a killer!

So that is the story of my 120 liaison, I suppose young photographers mainly use DIGITAL cameras now? Believe you me, all you young photogs out there, if you have the chance and means, do get your hand on the 120 experience! I did, and WHAT FUN and EXPERIENCE!

Footnote:
Shortly after my story appeared in another blog in Malaysia, I received this email:
Subject: NST Calender photos of Sharon


Dear CY,
I am a regular reader of Jeff Ooi’s articles and came across some pictures you took of my wife Sharon who was modeling for a photo shoot in Pulau Tikus.
I am planning a birthday present for her to give her a surprise .
You took some shots of her for the NST calendar and I was wondering if it would be possible to have copies of the photos for me to present to her on her birthday.
Kind Regards
Ben Singh
Fellow Malaysian

Talk about the world getting smaller! Of course Ben!
But wait! There are more…
Ben and family are living in London for 20 years now, he is a qualified commercial pilot, he sent me some photos of him and his lovely family. 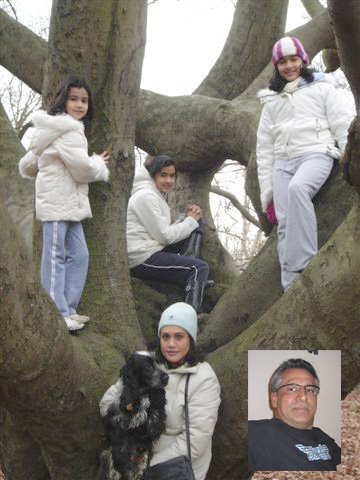 “Big Ben”… the man! And Sharon with Hannah Olivia and Jasna.
Mrs Ben you have lovely daughters!
HAPPY BIRTHDAY SHARON! You can be my model any time! 

Famous Last Word:
I came across this very interesting presentation on why Bronica went down the tube, take a look!

View more Microsoft Word documents from Chris Sandström.
If you enjoy that, there are many more at Christian Sandström's site! I learn so much from there!
** Christian Sandström is a PhD candidate at Chalmers University of Technology, Gothenburg, Sweden. His research interests concern disruptive innovations and how established firms can manage these challenges. Industrial and technological transformation and how this leads to structural changes in society are other topics which fascinate him. Some of Christian's work and lectures can be found on this website.
Thanks Christian for letting me use you presentation!

so cool! what an interesting and informative entry, I don`t know about the technicalities but I can see by your photos that the quality is superb, Now I regret throwing my Mum`s old camera out.I thought digital is "all that".. but now I`m left wondering.
As I was reading slowly through this entry so as to comprehend some of the "photographer speke", I thought.. wow,.. some romance woven into story.."Falling in love with Mamiya"..My love affair with Mamamiya.".
(Notice the second spelling is MAMAMIYA.)
I thought(sigh) how romantic! Cy is a true "man of the pen",weaving romance/betrayal/cloak and dagger/sultry eyed women into his blog entry,but..alas!.read on!
MAMIYAR IS A CAMERA!
Say no more! ha ha.

Thank you for your wonderful comment, Heather! You are a true "Master of comment"!! By the way, MAMIYA is a camera, MAMIYAR is not. No fault of yours, you can't tell a MAMIYA from a MAMIYAR! :) Ha ha ha...