Last week we caught up with Charles and Janet when we were in Auckland.

You might remember Janet and Charles who were dishing out the most delicious nyonya food at their Sri Intan Cuisine at Mt Albert, Auckland up until 11 Oct 2009. 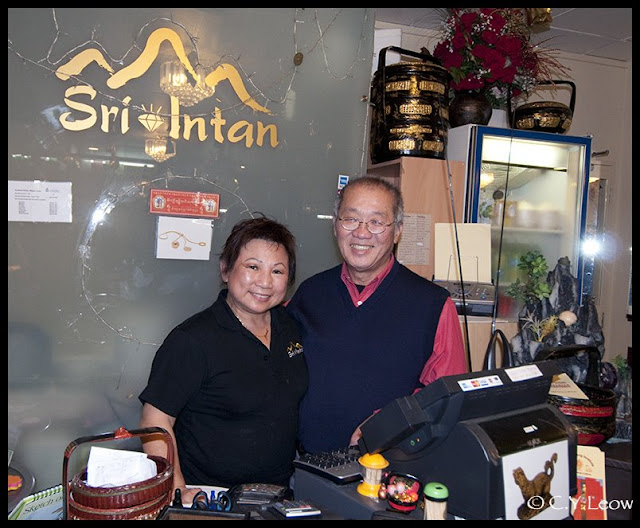 
So when Janet invited us to dinner at her house, CNY eve; we can't wait!

She told us that after Sri Intan, she only cook to order. Her loyal customers phone her for her special dishes, especially the "confinement" variety!

This CNY she got some order for the traditional "Yee Sang", which is very popular with Malaysians and Singaporeans.

Some of you might ask what is "Yee Sang"?

According to Wikipedia, and I quote:

It usually consists of strips of raw fish (most commonly salmon), mixed with shredded vegetables and a variety of sauces and condiments, among other ingredients.

Yusheng literally means "raw fish" but since "fish (鱼)" is commonly conflated with its homophone "abundance (余)", Yúshēng (鱼生) is interpreted as a homophone for Yúshēng (余升) meaning an increase in abundance. Therefore, yusheng is considered a symbol of abundance, prosperity and vigor.
While versions of it is thought to have existed in China, the contemporary version is created and popularised in Singapore in the 1960s amongst the ethnic Chinese community and its consumption has been associated with Chinese New Year festivities in Singapore as well as in neighbouring Malaysia.
In Singapore, government, community and business leaders often take the lead in serving the dish as part of official functions during the festive period or in private celebrity dinners. Some have even suggested that it be named a national dish."
Janet's special Yee Sang dish can be order at this number: 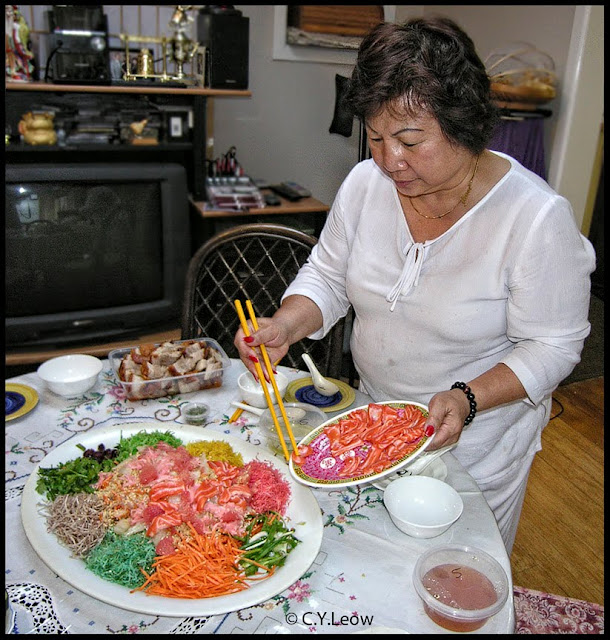 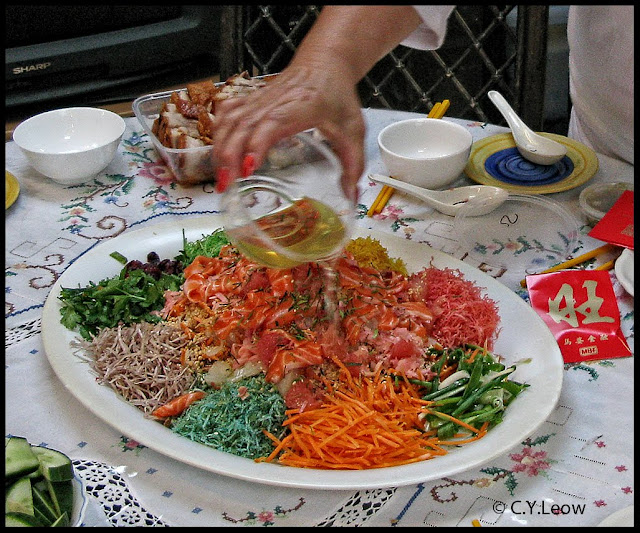 Of course the fun part of eating yee Sang is the "Lo Sang" before you tuck in!

"All dinners at the table than stand up and on cue, proceed to toss the shredded ingredients into the air with chopsticks while saying various "auspicious wishes" out loud. It is believed that the height of the toss reflects the height of the dinner's growth in fortunes, thus dinners are expected to toss enthusiastically!" - Wikipedia -

I shot a short video how Charles and "family" did it :)

Weng Lim commented on my link in FB...

"Another good introduction of "Yee Sang" to others who are non-Malaysians or non Singaporeans.

Thanks Weng Seng,there is still a short story but it is about using my Coolpix 8400 :)