I was accused of many things in my 30 years working in various newspapers as Picture Editor and News Photographer, there was but one time I was called a Paparazzi!

If you pride yourself as a photojournalist, being called a paparazzi is not a good thing!

Paparazzi (singular: (m) Paparazzo or (f) Paparazza) is an Italian term used to refer to photojournalists who specialize in candid photography of celebrities, politicians, and other prominent people. Paparazzi tend to be independent contractors, unaffiliated with a mainstream media organization.

By the late 1960s the word, usually in the Italian plural form paparazzi, had entered English as a generic term for intrusive photographers.

In my working life as a news photographer I sometime got myself in really sticky situation! 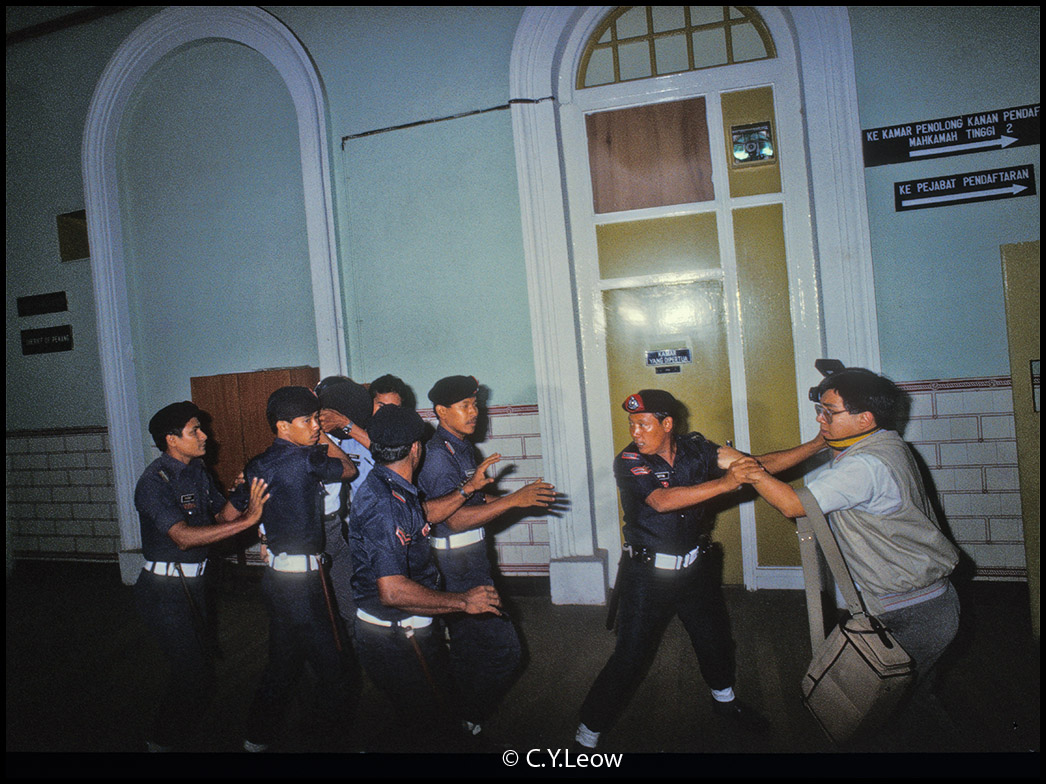 Like taking a decisive shot of Reuters photographer Goh Chai Hin being man handle by the men-in-blue at the Penang High Court.


For some unknown reason the police and FRU (Field Reserved Units) of Malaysia tried to hide drug trafficking suspect Frank Foerster face from the media!! This was unprecedented! Never happened before!

Immediately after I took that DECISIVE shot, I was whacked by a police truncheon and fell in pain on to a ABC cine light man, his flood lamp shattered all over the court floor.

But no one call me a paparazzi! ;) 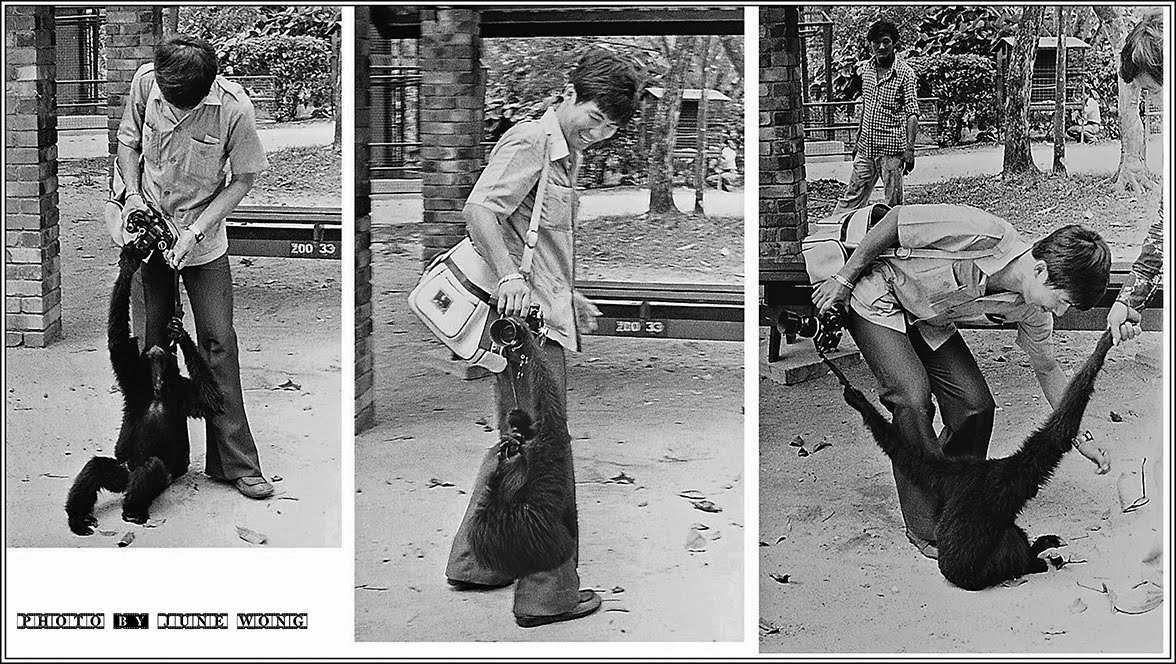 Or that time when I took a shot of this nervous monkey in KL zoo and the irate primate trying to confiscate my Nikon, but he did not call me a paparazzi! ;) 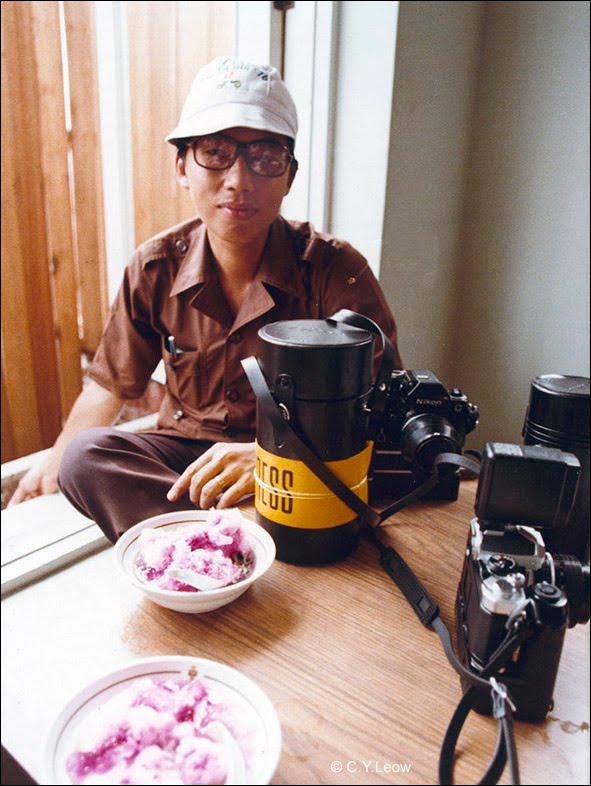 Do I look like a paparazzi to you? (Circa 1983, covering an international golf tournament in Selangor, Malaysia.)

J.Y. was the Executive Director of the Ban Hin Lee Bank in Penang.

On that fateful morning on the 24th October 1985, J.Y. was in his Jaguar, driven to work along Leboh Pantai by Muniandy; his 45-year-old driver. His 77-year-old "amah" was also with him.

As the Jag arrived at the Cantonment Road and just before the traffic junction, a blue Volvo from the opposite direction cut into the path of the Jag.

J.Y.'s driver, obviously has not been to defensive driving course, panicked and try to reverse the car! On hind sight he should have bulldozed the Volvo! To his horror, another Volvo blocked the Jag from behind.

There were five men, two from the front and three; rear, approached the Jag.

Legend has it that J.Y. got his personal pistol not long ago, after he got the gun he dismissed his body guards. The police told us that J.Y. was using a .38 Smith and Wesson Special, but according to his close friend; he got himself a Walther PPK. 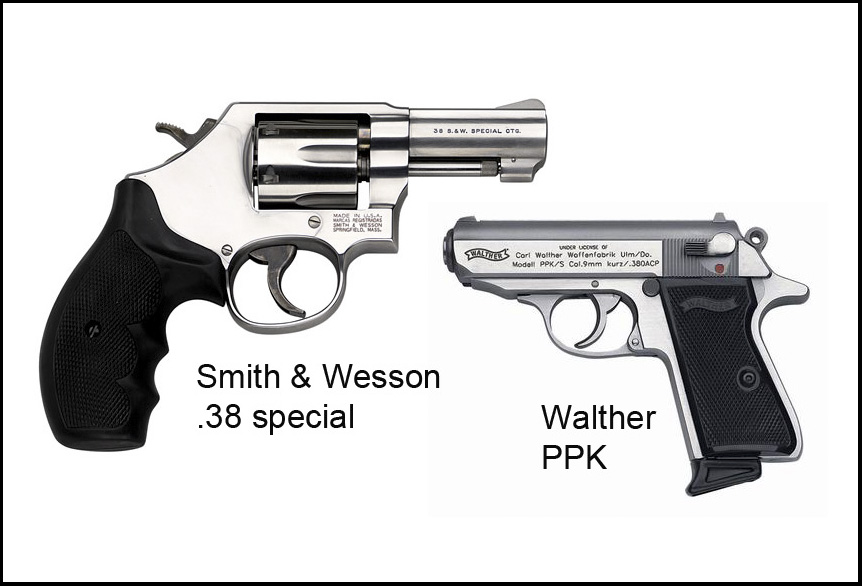 As the kidnappers opened the Jag's door, J.Y. fired point-blank at one assailant; the 26 year-old (later identified as a carpenter) took three bullets and fall dead.

Judging from the other bloodstains at the crime scene, police think J.Y. must have fired and injured a second man, it also look like some of his shots pierced the Jag's car roof.

Out gun and out of ammunition, J.Y. was dragged out of his car and shot twice in the chest. One bullet punctured his heart. He was rushed to the Penang Medical Center, near by; but he died.

The driver and Jimmy's "amah" were unharm. The police was unable to find Jimmy's gun.

I was the Picture Editor at The Star, again; second time round.

When we got the news, I rushed to the crime scene with rookie reporter; young Tommy Lee. There were nothing much to photograph, just cars and cops.

We decided to go to the mortuary at the General Hospital. We got information that J.Y.'s wife is going to claim the body and the family will take J.Y. home, all suited up; in his Mercedes limo. Some sort of Chinese tradition?

There were more than a dozens photographers outside the mortuary, when the moment came; it was unbelievably crazy... everyone try to get the news picture of the day! 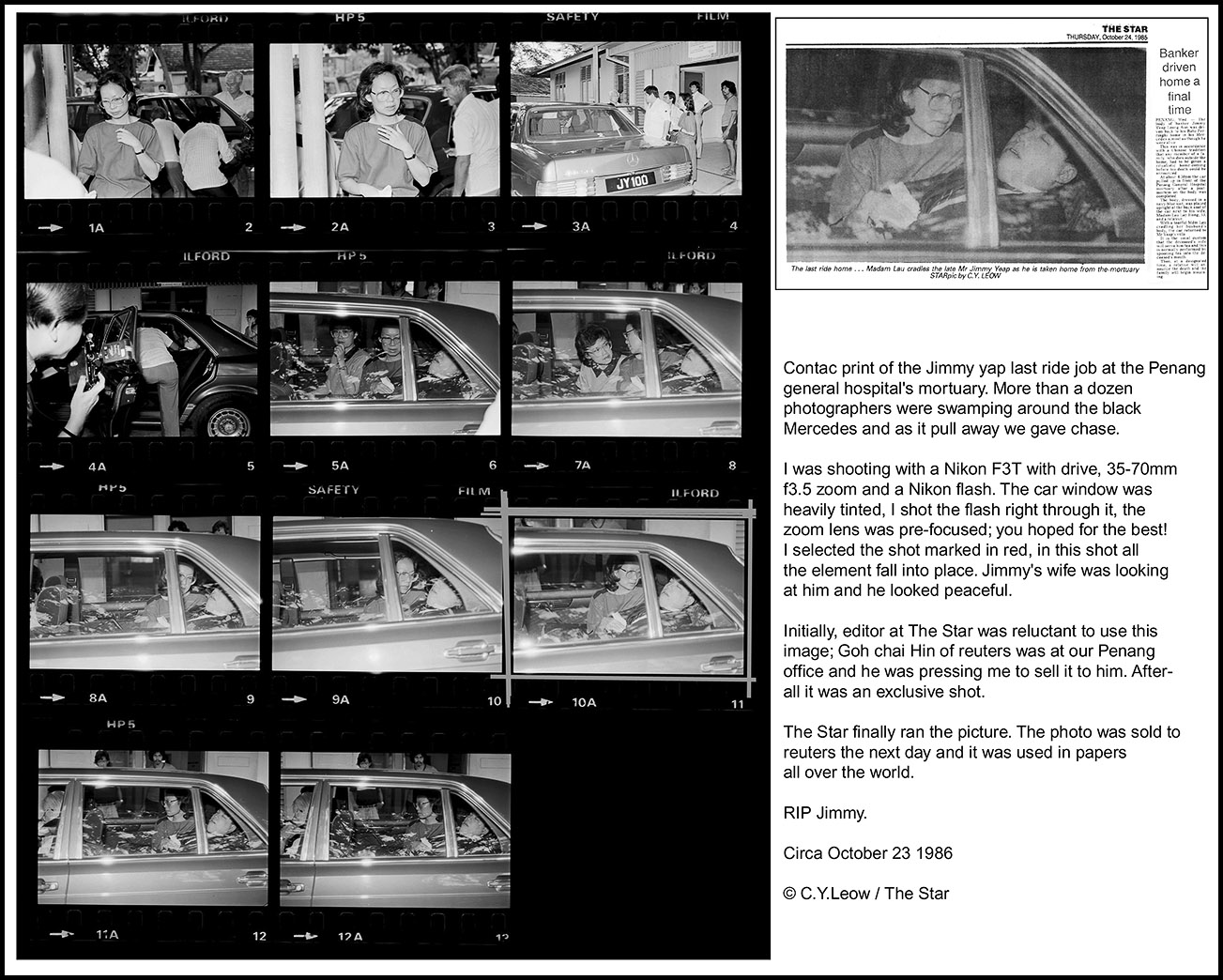 Above is the actual contact sheet of the shoot:

Frame 1 - Jimmy's wife going into the mortuary. Noticed I was not stop by the family.


Frame 4 - The car is getting ready to go, a anxious young photographer blocked me!

Frame 5 - The car is going to take off, I started firing into the heavily tinted car window. Mrs Yeap was with her sister. It was impossible to focus or see what was going on inside the car.

Like I say, the car windows were heavily tinted, I was shooting with a Nikon Speedlight; point-blank into the window.

The Nikon 35-70/3.5 "two touch" zoom was pre-focus on the window frame and the focusing ring was advanced another one foot extra setting and all shots was done on this fixed setting.

From Frame 5 to Frame 11, I secured 7 frames before the car zoom off.

This was Frame 9, the best take. 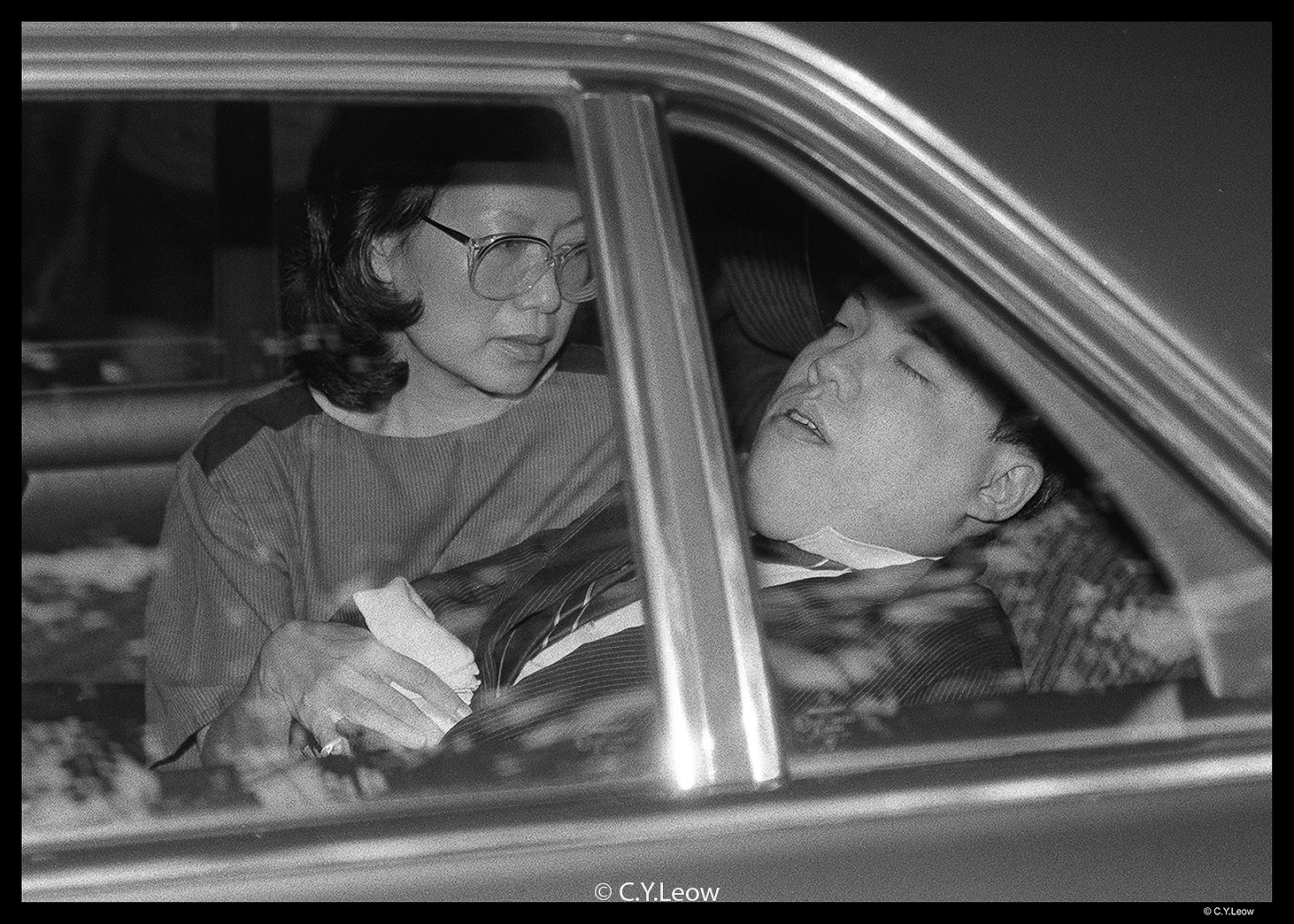 Now, before any of you "holier than thou" started to accuse me again, please understand that I realised that was a very private moment; Jimmy's wife and family did not object us being there to record the moment, so stop calling me a paparazzi!

I was just a photojournalist doing his job, the best I know how!

(The Star sold this picture to Reuters and it was published all over the world.)

The camera of choice in 1985 was the trusting Nikon F3T and the F3P.

This is the same F3-P camera and lens that recorded the moment. 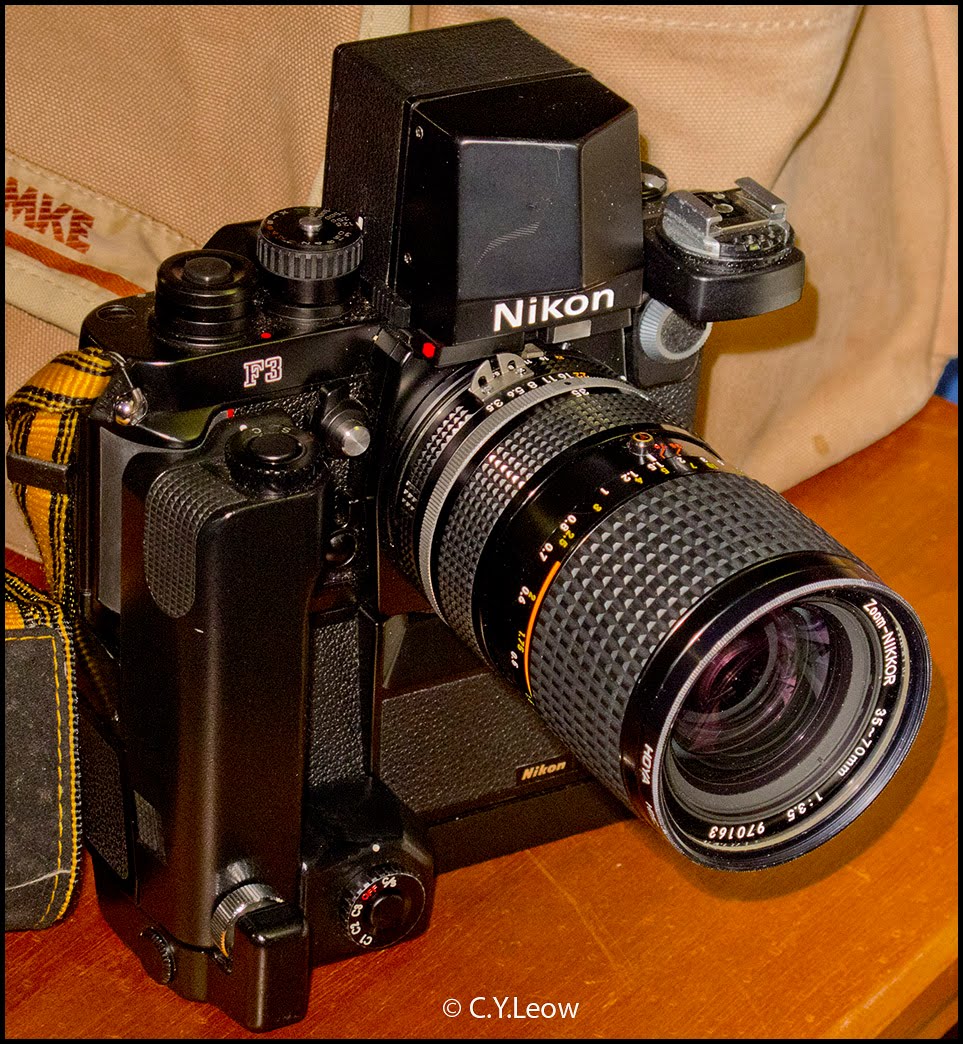 The upside-down prism on top of the camera is a "Sport Finder", a must have for covering "action" jobs!

With the sport finder you can see your view WITHOUT putting your eye near to the finder! 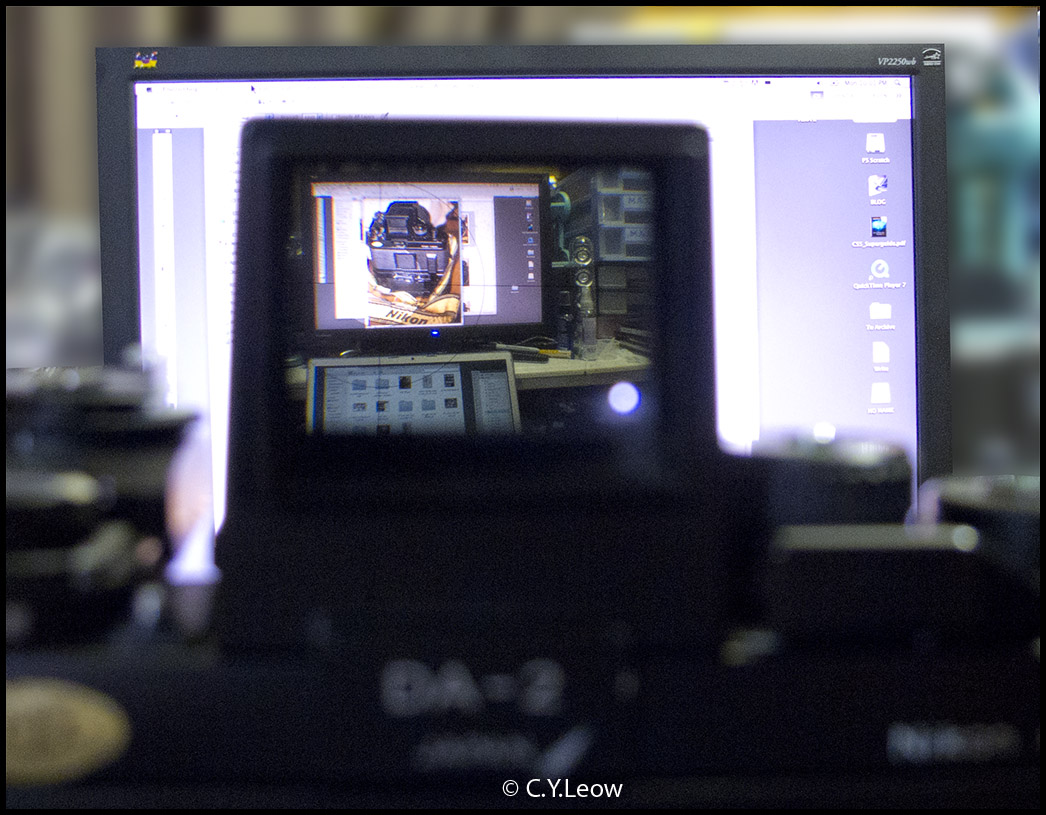 The sport finder is like a small tv screen! Allowing you to track the action with the camera inches away from your face! What a shame they don't make them now! 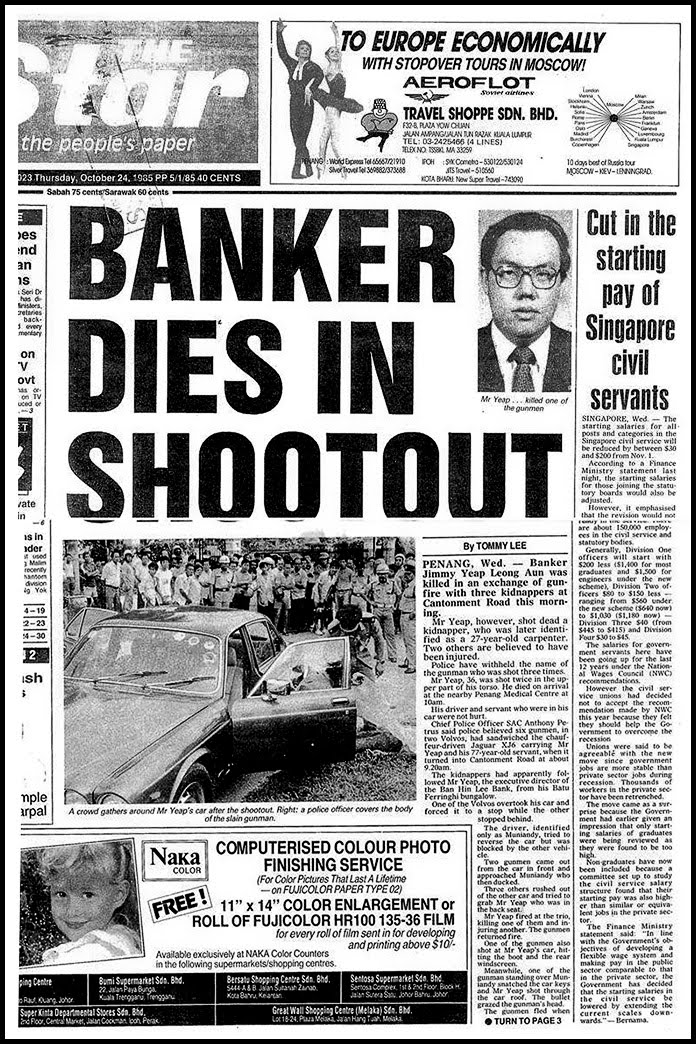 Interesting. Any idea what happen to the other kidnappers?

You will have to give us a demo.. a reconstruction of the execution of that shot.A decisive moment indeed!
The problem is, without people knowing you and hearing your rationale for taking those shots.. the obvious conclusion would be that you are paparazzi, because that`s how paparazzi operate.
The bottom line is that it`s a job, your job,and an opportunity like that would be too good to miss. Well done.

Hi iml
I remembered vaguely the cops caught some of them.

Thanks Heather for your understanding. As far as I am concern, it was a recording of an historical events of sort.
Paparazzi work for money, I work for the love of photojournalism; that is why I am poor.. ha ha ha