After a long wait of FOUR WEEKS, my Rolex GMT-Master finally came back from Singapore!

My friends laugh at me when I tell them I miss my watch!

In comparison my heart only beat an average of 9,3819,6000, slightly more than nine million time!

I still remember, it was like yesterday in 1988; my family and me were getting ready to move to Wellington, New Zealand. I always wanted a Rolex, but it is just a dream to a "lowly paid" Picture Editor of a local newspaper. Especially when the paper I work for was CLOSED by the Malaysian government!


Thankfully, due to our migration to NZ; we were able to withdrew the small amount of EPF fund! It was a miserable RM 10,100.00!

Recklessly I bonged an equivalent of two months pay on a Rolex GMT-Master! Like they say, the rest is history! By the way, I never regretted it :)

Two months ago I noticed my GMT work horse was unable to keep it's "wind" for more than 5 hours. When I pick it up to wear in the morning, it is "dead"! Alarm bell! It need a major service! Rolex recommended a service every five years, you kidding me; do money grow on trees ;)

Anyway, I knew I must get my GMT service soon or it might just die for good! Our local Rolex distributor Partridge Jewellers told me it have to go to Melbourne for service! Obviously Rolex don't think much of the New Zealand market ;)

So I called the Singapore Rolex Center, from my Internet research they came highly rated! I was put to a Miss Caryn Yeo, Service supervisor; what can I say? Her service is first rate! I was told exactly when my watch will be work on and when it will be ready!

One month ago I gave my GMT-Master to a good friend (thank you Casey Foo) who is going to Singapore, he pass my watch to Caryn and the next day she called me and informed me what work need done and how much it cost. Like I say, impeccable service! The most exciting part was they are putting in a NEW dial! I can't wait!!

Last week, my GMT-Master "came home" with another good friend (thank you Yew Mun and Mei) of ours.

My heart missed a beat when I slide it out from the green leather pouch (given by Rolex Center), it look absolutely... LIKE NEW!

For the next few days I was busy syncing my "new" chronometer with the World Clock and just as I expected it returned an average of -2 to -3 second a day. Thank you, Caryn and the technicians at the Singapore Rolex Center!! You are my heroes!!

After weeks of rain and groom, today the spring sun is finally out! I took some shots of my beloved GMT-Master. I wish I had taken some shots before it went for the "make over", but look at it today! 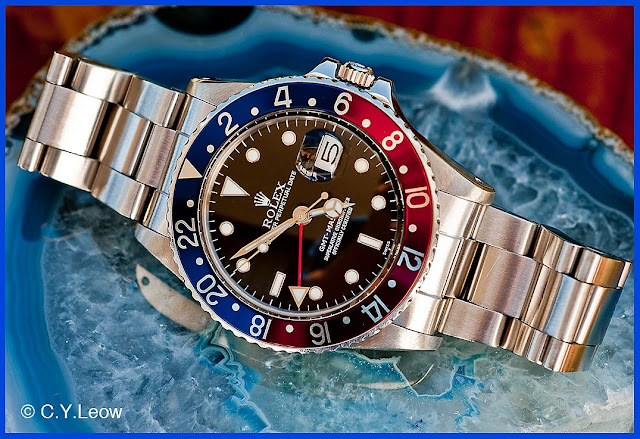 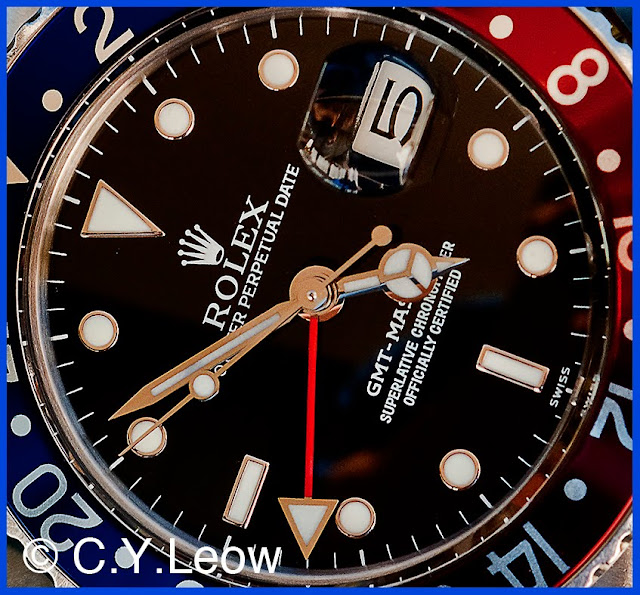 So what do I wear when my GMT-Master was away? My manual wind Omega Seamaster that I bought second-hand in Penang, 1985. 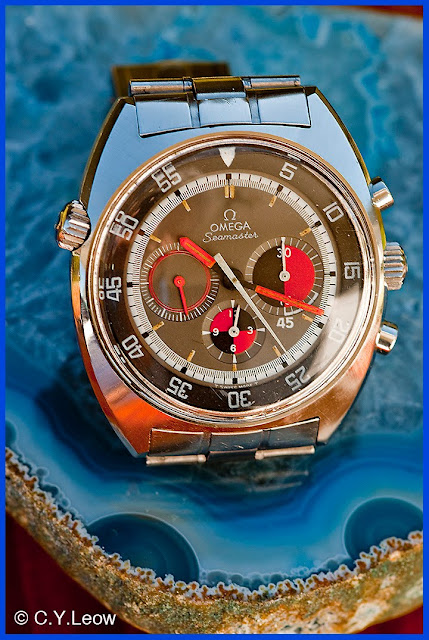 Nice watch but it is not automatic, unlike the GMT-Master who tick on 24/7!

In 1994, I met Eddie Adams when he was giving a Kodak seminar in Singapore, Eddie was the famous photographer who took the picture of a Viet Cong being executed in the middle of the street. That decisive moment picture execution shot won Eddie Adams the Pulitzer Prize for the Associated Press in 1969.

While talking to Eddie I noticed he was wearing the same watch as me! We chat a bit about the GMT-Master and photography.

The Rolex GMT-Master is fraught with legends and stories!

Did you know that The Rolex GMT Master wristwatch (ref 6542) is originally designed in collaboration with Pan-Am Airways for use by their pilots when travelling through multiple time zones on transcontinental (or long-haul) flights?

And do you know that The Real McCoy, a Japanese company reproducing WWII American flight jackets. In 1997, they customized 200 Rolex GMT Master’s to commemorate the 50th anniversary of Chuck Yeager breaking the sound barrier. The watches sold out almost immediately and have become mythical!

Email ThisBlogThis!Share to TwitterShare to FacebookShare to Pinterest
Labels: Watch

Hello Heather I am stunned you actually believe what you said! Please do not put your mentality to THAT level ;) I know you better than that!
Rolex is about the highest precision, the spirit of innovation..
It is the same type of human spirit that created your laptop you think so highly of and with that you told me you learn many aspect of knowledge! It is the same spirit of innovation that created your digital camera that you enjoy so much in snapping all sorts of pictures and memories!
Making a mindless comment like that defy my imagination!
May be you should go sell fake watches at Porirua Market too? Ha ha ha...