Every end of the year Kiwis chill-out during their "silly season".

We love our silly season in Wellington! The city is half empty, traffic are easy; we just laze about from 24 December till 11 January, then we go back to work.

During this silly period, internet is VERY important to us! We spent umpteen hours in front of our screens. So can you imagine the kind of stress and frustration on Tuesday, 5 Jan; when Le General's DELL Dimension 9150 refuse to start up?

Here are the day by day account of my saga :)

Wednesday (6 Jan) - Call the 0800 number for DELL NZ and get connected to their help desk in Philippines. It pay to have your service tag number and your "Express Service" number ready.
And the tech will understand you better if you say "One-France-Wellington-Thailand-Holland-One-Singapore" instead of 1FWTH1S ;)

After listening to my problem, the helpful tech asked me if I am comfortable to open the case cover and do some testing! I have been inside a Mac G4 and G5 before and I suppose a PC is not that different, five minutes later I am looking at the DELL innards. 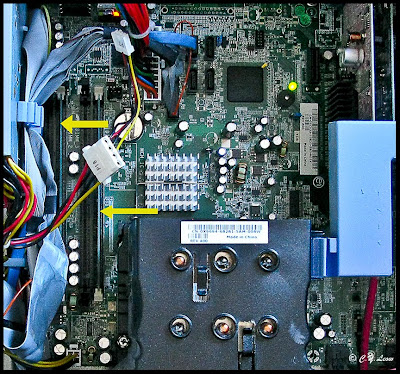 Inside the DELL, arrows show where the RAM strips are located.


The tech then instructed me to pull out both RAM strips and then to plug each back in different slot, one at a time. When I press the start up button I also have to tell him the lighted numbers that appear on the front panel. Out of four "test", the DELL managed to start once.

Our young tech concluded that the MOTHER BOARD of the machine is buggered! But no worry, my warranty only expire the next day! Talk about luck! Young tech promised me someone will call me today or LATEST by tomorrow before noon to arrange a mother board and RAM replacement! He even confirmed the parts are in stock and got approval of the service from his supervisor! "GREAT SERVICE!" I smiled..

Thursday (7 Jan) - We waited till 3 pm, no one call! So I call DELL help again. A different tech this time, half of the time we are having problem understanding each other, but after 40 minutes I was promised someone will get in touch with me in an hour!

Three hours later I was back with Philippines, annoyed; angry. But I think I was as calm as I can and the tech (different one again) told me, after putting me on a 7 minutes hold, that someone CANCELLED my service! I demand to know WHO did that but I did not get an answer. The very helpful tech then told me he will PERSONALLY see that my service is put on again! He even gave me a dispatch number and a SYDNEY phone number to call tomorrow!

I was told all I have to do tomorrow morning is to call that number in Sydney (turn out to be Unisys), tell them my dispatch number and they will follow up with my case.

Now I am getting somewhere, I thought to myself... hee hee

Friday (8 Jan) - I came home after dropping Le General to work, I called Unisys in Wellington to find out if they have an 0800 number for Sydney; I am not about to spend money on an oversea call! I was not given but their operator connect me to Unisys in Sydney.

I have no problem communicating with the Australian tech at Unisys. After he look into his system, he told me he cannot find any instruction from DELL help on my case!

WT!@@##$?? I was then advised to call DELL help in Philippines AGAIN! Well, at lease I was given the 0800 number for Unisys! Great help that will do me! 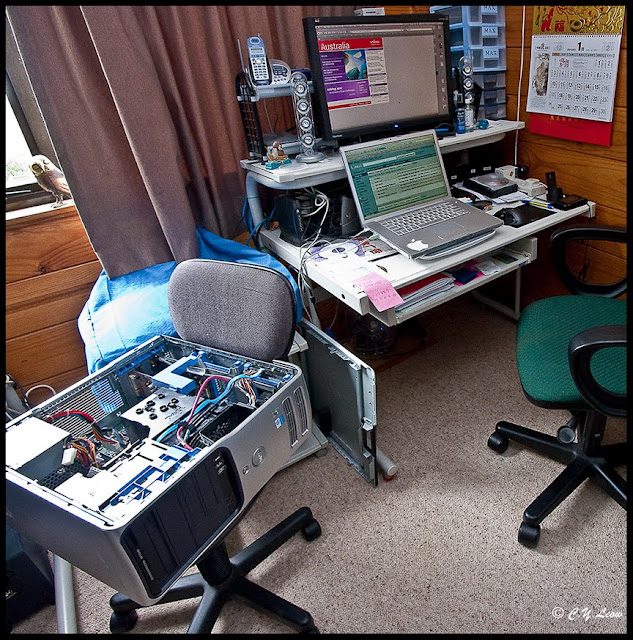 Friday, the DELL is still out of action but my Mac with Snow Leopard is purring along happily!

I must be sounding a bit deranged when I call Philippines again and a different tech is talking to me and again I was told someone will call me! I gave up and went back surfing the net with my reliable MacBook Pro.

An hour later, I almost had a heart attack when my mobile rang and was told by a woman from DELL, Auckland that they are sending me the parts! I asked her why me? I do not know how to swab the bleeding mother board! She assured me that a Wellington tech will come and get it install for me! Hurray that!

Saturday (9 Jan) - Bright and early, before 9 am; a knock on the door and I got three boxes from a courier. The two small boxes contained a RAM strip each and the large box, the mother board replacement. 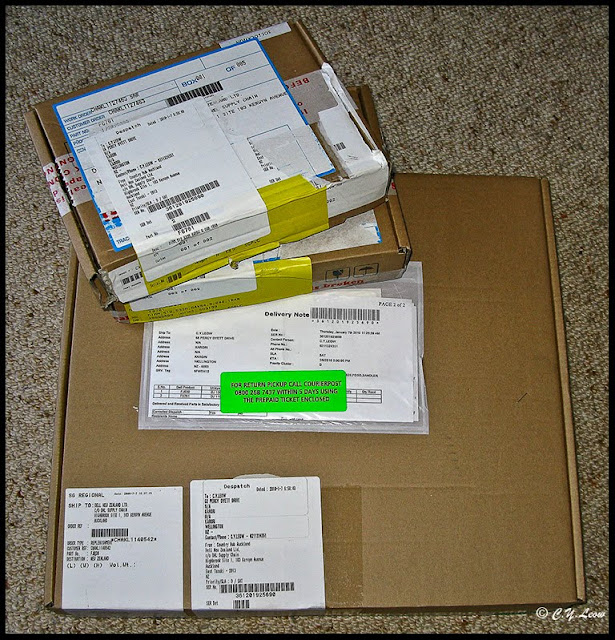 The parts for the DELL Dimension.

Taking a closer look at the boxes I noticed in horror that a label on the large box declared that the part inside is a REFURBISHED!!!!!!!

WHAT?!! After paying all that extended warranty money and I am getting a SECOND HAND, USED, REFURBISHED mother board?

Suddenly I remembered the on phone "tests" three days ago, it dawn on me that it could be just a case of bad RAM and NOT bad mother board! I butchered the small cardboard boxes and put in the two new strips of supplied RAM.

Presto!! The DELL boot up immediately!

Just to make sure, I boot up and shut down half a dozen times without a hitch!

I proceed to defragment the C drive, it was 40% out of whack! I left the DELL running and went out to lunch with some friends at Te Aro.

It was there when the Wellington DELL tech called, I told him the PC is running OK now but he said he still have to check it out. Fine by me.

Mash, the DELL tech arrived at my place; 3.45 pm. He asked me for the DELL hardware diagnostic cd so he can test out the machine, DUH! I don't know where I put mine but don't he have a copy?

Mash asked me how come the parts are dispatch to ME instead of TO HIM, hello... do I work for DELL or know what DELL is thinking? Mash commented that sending the parts to the customer is VERY UNUSUAL, well; I suppose DELL have unusual work flow? ;)

Mash told him he did and also I did that; many times, but no; JUST DO AS YOU TOLD ;)

As predicted the DELL passed the boot test in flying colour... why, now it is almost as fast to start up as my Mac! When was the last time you defrag your C drive?

Mash left me without having to do anything! Oh... he took back all the parts too! They can have that used mother board back for all I care! Ha ha ha...

So there you are, my encounter with DELL EXPRESS SERVICE. Is FOUR DAYS considered to be EXPRESS? You tell me ;)

It is not that them DELL techs are not helpful, they were; but I think it is better to follow up with an email explaining to your customer what will happen next. Don't jump to conclusion we know your work flow! It is not good enough to explain on the phone only, please realise everyone speak English with a different ascents. You can be hard to understand and vice verse.

And will I buy another DELL the next time I upgrade for Le General? I think I will, mainly because their build quality is first rate!

Their service though, needs some SERIOUS FINE TUNING!

What say you DELL?

I suppose it is not easy to become the NUMBER ONE PC company ;)
Posted by cy.leow at 10:28 PM

Hope Dell have seen your article and give you a new set...hahaha..but 4 days can consider fast service already

My several experience with Dell is 2 days turnaround time and i always insisted that they sent their service guy to replace the new parts.They should ask for feedback of service provided like they do when you purchase goods or accessories from them.