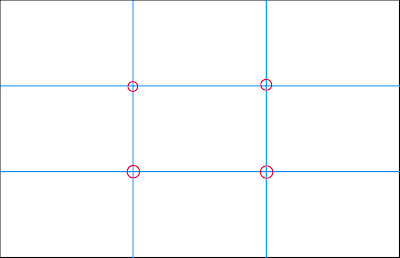 
Now, please roll your mouse over the diagram above and you will see what I meant. See? 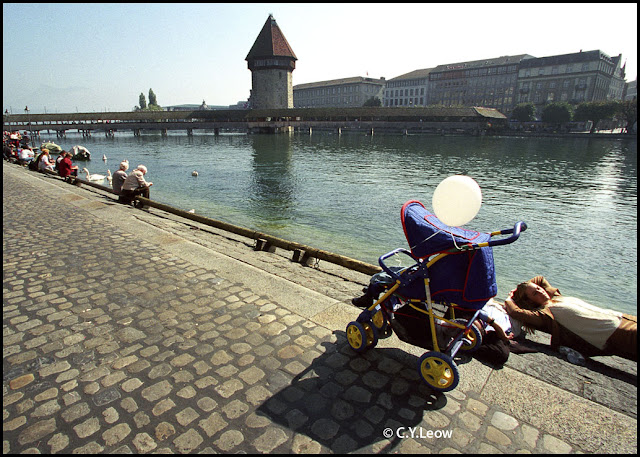 "Afternoon Delight" was taken by me on a beautiful fine day, cool breeze; along the river; right smack in the city of Lucerne... great spot for a nap, baby included!

I placed my subjects, the pram and napping mum smack on the right third, my horizon just about align with the topmost third. All this strengthen the composition and make my picture more dynamic! 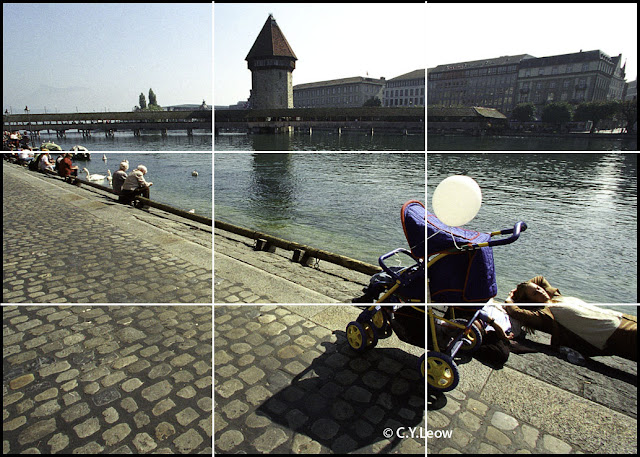 Bear in mind though, you do not need to worry aligning every image with the third rule. The lines are just a guide, all you need to remember is that usually; placing your subject in the center is not a good idea.

But then there are many situations where you have to ignore the rule of thirds. Take a look at the image below... 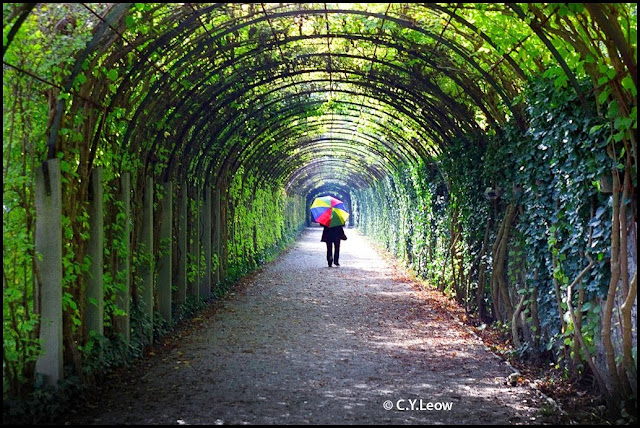 "The Tunnel" was shot at Garden Mirabelle,Salzburg. Did you know they filmed "The Sound of Music" here!

I especially like this "tunnel" of trees with the sun streaming from the top. The colourful umbrella strengthen the shot.

if you roll the mouse over, you will notice my subject is right in the middle; but that is alright! In this instance, that is the best position!

More pictures trying to adhere to the Rule of Thirds.. 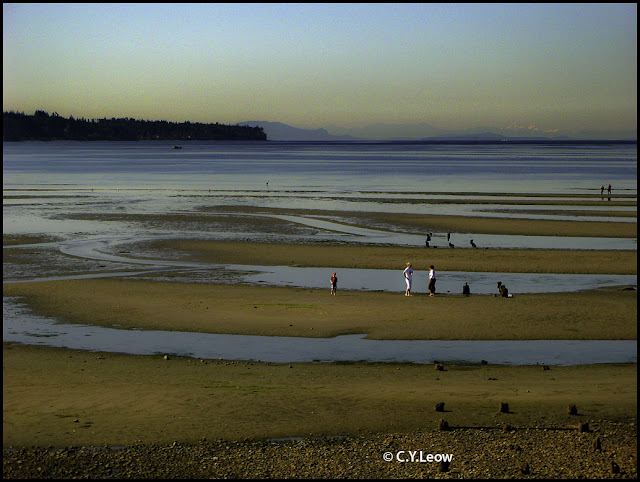 This interesting beach scene was shot from a moving train from Seattle to Vancouver. Mouse over to see the "rules". 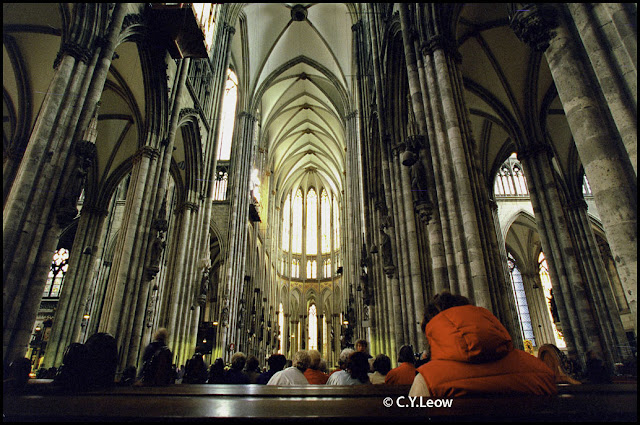 "Red Riding Hood" was taken at the majestic DOM (Cologne_Cathedral) in Cologne, Germany. Mouse over to see how I placed the lady in red optimally. 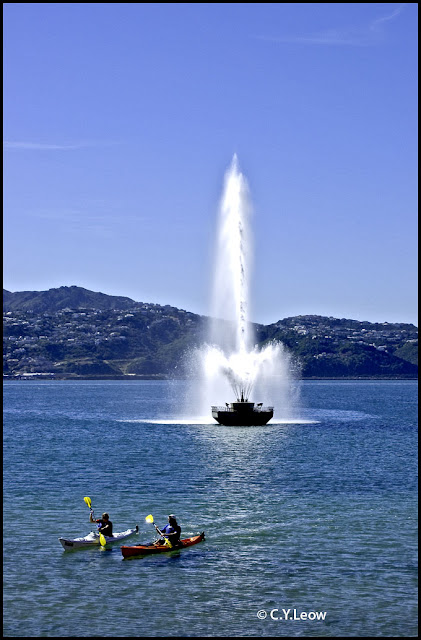 A vertical picture taken at the Oriental Bay, Wellington; New Zealand. The rule of thirds works wonder here. Mouse over and see for yourself! 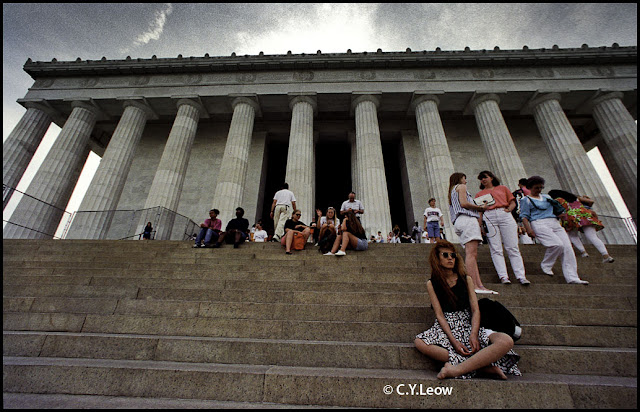 Another picture that I make good use of rule of thirds, mouse over to see how they all "tie" together. Picture was taken outside the Lincoln Memorial, Washington; USA. 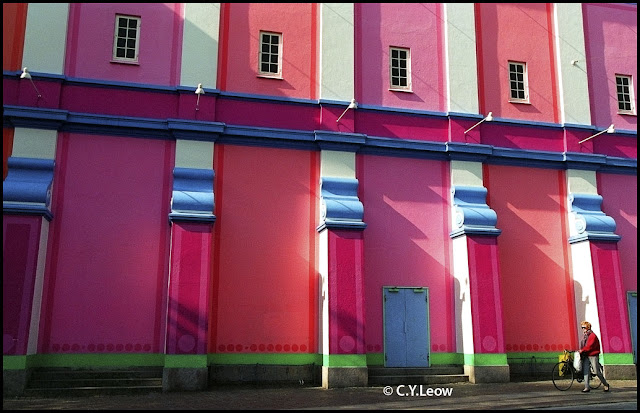 My favorite, "The Pink Building" was taken in Copenhagen, Denmark. Mousing over, you will notice the position of the cyclist is not exactly spot on third but can you imagine what the composition will be like, minus her? I find human figure, if place at the optimum position; often enhance the composition! 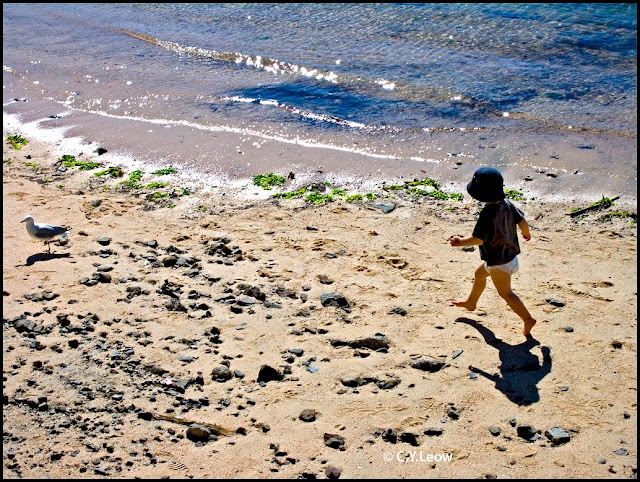 Even a simple beach scene taken at the Oriental Parade, Wellington; New Zealand benefit from the rule of thirds! Mouse over to see. 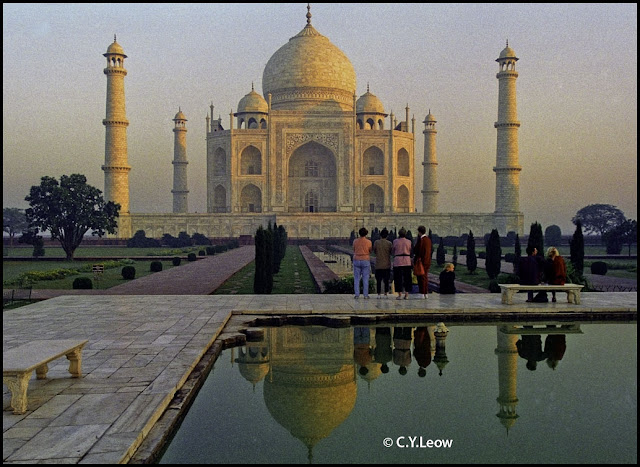 "Sunrise @ Taj"..Shot at 6.15 am at the Taj Mahal, Agra; India. The line of tourists and their reflection... placed at the third, (mouse over to see) you cannot ask for more! Picture perfect! This is one picture taken with the fabled Leica M6 and a 50 mm Summicron lens on Kodak Ektapress film. 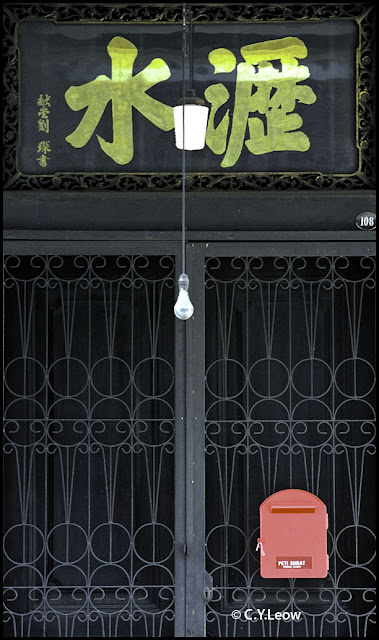 One of the Malacca, Malaysia shot commissioned by PricewaterhouseCoopers, Malaysia for their Global Images project.
Nikon F3P Nikkor IFED 300mm f4.5 lens. Kodak Supra film.
Circa May 2000 © C.Y.Leow / Pricewaterhouse Coopers
Mouse over to see why they like this shot.

Finally even Adobe recognise the importance of The Rule of Third in photography. The crop tool in their latest Photoshop CS5 Extended will superimpose a "Third Rules" over your to be crop image, guiding you to a better composed crop?

But what if you only got the earlier version of Photoshop and you want that useful feature?

* The Rule of Thirds actually goes way back. Painters have been benefitting from this rule since the days when Greek artists discovered it. So let's take a look at the Rule of Thirds as it relates to photography. - Betterphoto.com

* The “Rule of Thirds” one of the first things that budding digital photographers learn about in classes on photography and rightly so as it is the basis for well balanced and interesting shots.
- digital-photography-school.com

Let There Be Rules!