Fast rewind to 1977, when we were all young and beautiful; it was during that time when the newspaper where we worked, "went national" and I had to packed my bags and took my two loves to Kuala Lumpur.

Those were the tough, exciting; and challenging days. We met them head on and looking back, we love it ;) 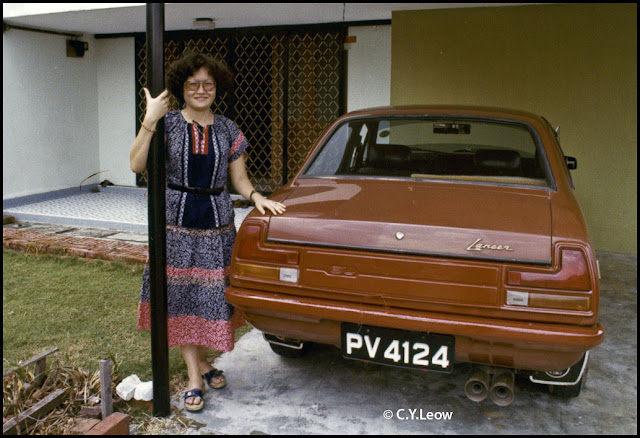 My "two loves", my young general (we just got married) and the Lancer EL (1,200); first car that I bought with my hard earned cash, a year before we got transferred to Kuala Lumpur.

I remember fondly those KL days when both of us missed Penang so badly that we drove home every week!


There were no North South Highway then, to avoid the day heat and to maximise our Penang stay; we shot off Friday night at 1 am and if we were lucky not getting smash up by all the night trucks and buses... we will arrive Penang just in time for early "bak kut teh" at Gurney Drive!

Came Sunday night, we jammed our tired bodies into the little Lancer and make our way back to the city we love to "hate"!

Those were the days of living dangerously and my Lancer were with us all the way!

I remembered there was one time, half way into our journey; the fan belt broke and the Lancer threatened to blow it's top... I got her going by using my wife's stocking wound tightly around the water pump pulleys!

We managed to limb the Lancer to a road side garage near Ipoh and got a new fan belt fitted.

On a few of these trips, C.H.Loh; our good friend and my young protegee plus his wife will come with us. Thanks for those great times, Loh :) 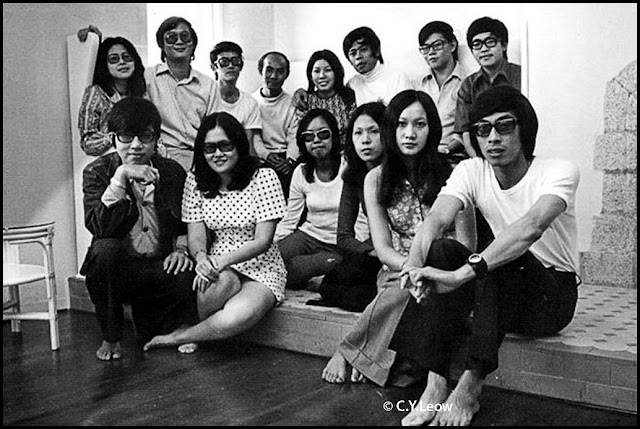 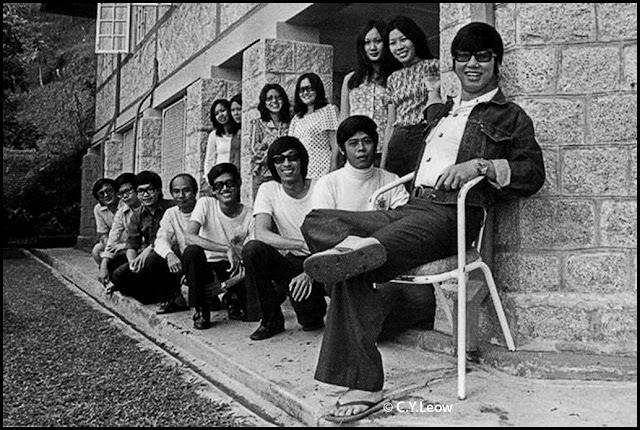 With friends and colleagues from The Star, C.H.Loh and wife are in the top photo, first row right. On the left, me and young general.

After my tour of duty in KL, while waiting for the arrival of our first child; we went back to work in Penang.

After I got a job as the Manager of a leading photo shop (NOT Photoshop, Duh!) I sold my work horse, the Lancer EL.

The company's manager car was the boring Ford Escort Mk II 1300, which; CAUGH FIRE when I was on my way for lunch! Good riddance ;)

I was ecstatic when I discovered that Andy Chew is now working at Wearne Brothers Ltd! They deal in Holden, Opel; Subaru; Morris; Jaguar etc etc and the giant auto retailer is just opposite my work place!

Andy was a super car salesman, before he joined Wearne; he sold a Vauxhall Victor 2,000, a Vauxhall Viva SL90 and a Toyota Corolla to my dad! I was driving the Vauxhalls before I bought my own Colt Lancer.

I almost went gaga the day when Andy told me they just got a brand new Holden Torana GTR and since he knew I always like fast car, would I like to test drive it? 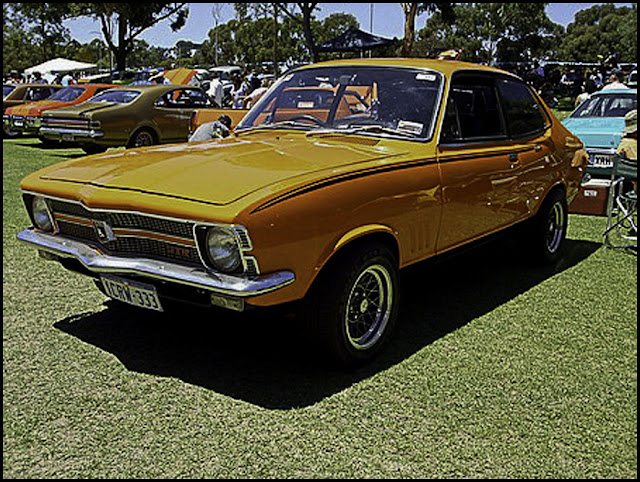 Only a fool will refuse that offer! I always admire the GTR!

Alas on that fateful day something went wrong when I negotiated the big roundabout, Northam Road end; the GTR met the concrete island, head on and the front end of the little Holden was no more in front ;)

Those were the years without safety belts and I and Andy (passenger) were lucky to escape without a scratch!

Some say that was why I bought a Subaru 1.6 GLF (with fancy instrument panel and a "Boxer" flat four engine) from him :) 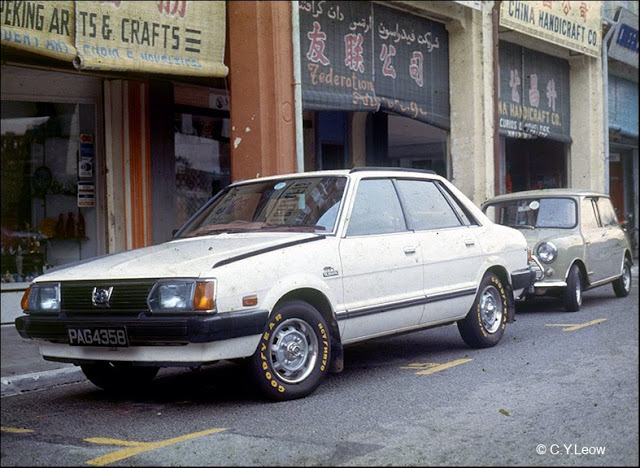 My Subaru GLF with hard rubber "fins" mounted beside the bonnet, I deviced and installed them myself after I saw picture of them on the Lancia rally car ;)

Look at those groovy Goodyear NCTs tires! Raised letters on the tire wall and I painted them yellow! Yak!! I thought they look cool then ;)

The flat four was noisy and the cornering abilities of this granddaddy of WRX was nothing to shout about!

After the Subaru I fell in love with the two door Ford Laser Sports and within three years I owned two of them! You probably know these Ford were actually Mazda 323 in disguise... hee hee 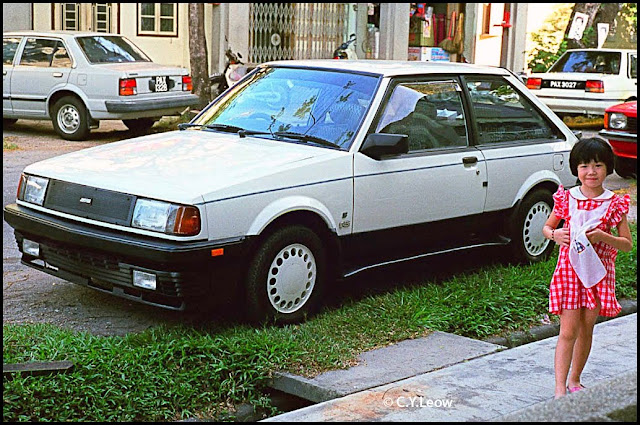 My second Ford Laser Sports was heavily modified ;) It was the FIRST car in Penang or may be, Asia; to wear a custom made, METAL side-skirt!

Our Ming-N was wondering what all the fuss was about :)

Came 1988, my Laser and me part company when I took my family and settled down in Wellington, New Zealand.

My first car at the Land of the Long White Cloud was a second hand Honda Civic 1.3 four door bore-mobile, followed by a new Civic 1.5 two door the next year. 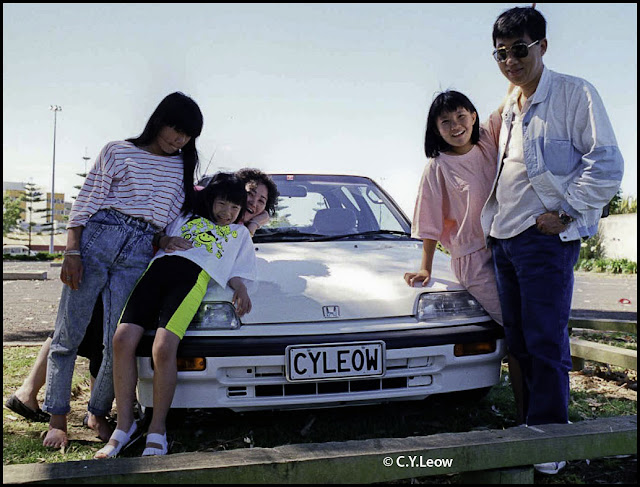 My Civic with personalised plate, we toured the whole North Island of NZ in this baby. This sporty looking Honda can do with more power though!!

In 1993 we moved to Singapore, I was without a car for four years. I just cannot afford the crazy high cost of car ownership on this small island!

When we returned to Wellington in 1996, I was bitten by the Mazda bug again! I went and bought a new Mazda 323 1.6 sedan, my ex colleague returned my personalised plate to me! Thanks Sue!

The 323 gave us trouble free transport for 7 years! Half of those years it was driven by May-N while I was working in KL.

The new Mazda 3 came into our life in 2005, at that time it was a very exciting car indeed! A TWO LITRE 150 HP, twin over head cam engine and a Tiptronic gear box! It was a fun car to drive! 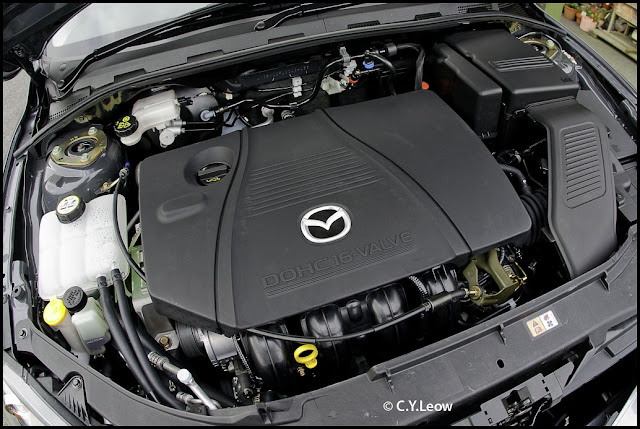 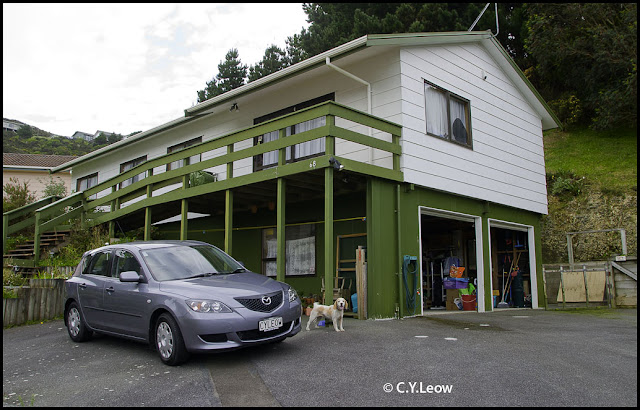 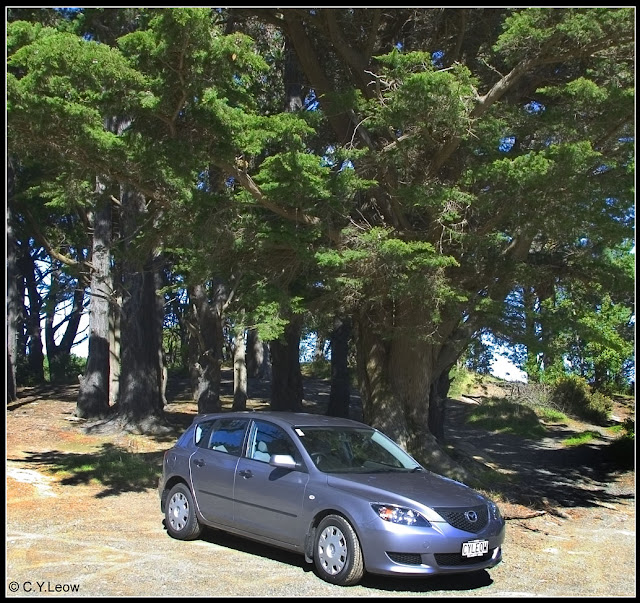 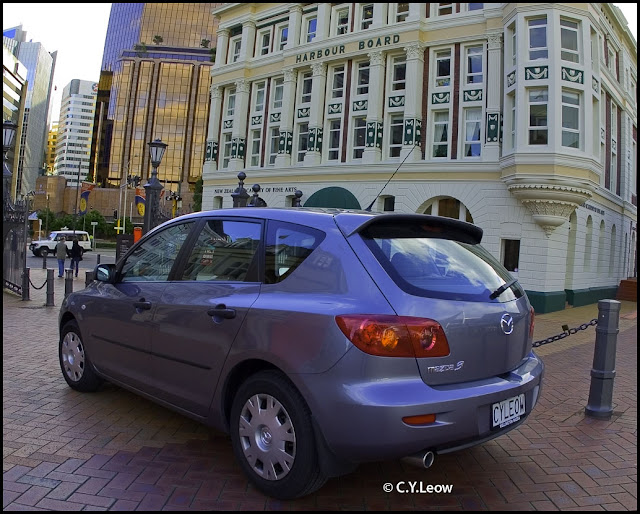 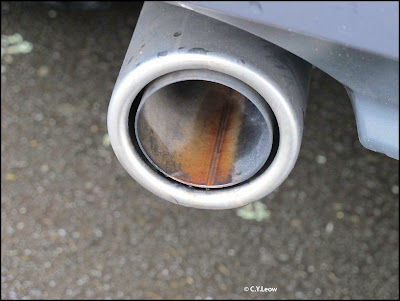 The Mazda is also the most clean burning engine I ever know, look at the exhaust after all these years of service!

My 3 gave me absolutely trouble free 110,000 KM of service and it is time to upgrade before it loose too much resale value :)

Happily, my Finance Minister gave the go ahead and I went looking ;)

It just happen when Martin, my colleague / friend / Mitsubishi enthusiast inform me there is a good deal at Mexted Motors, Tawa (near where we work)!

So last Saturday we went and meet up with Ian, Martin's friend and super sales guy at Mexted. 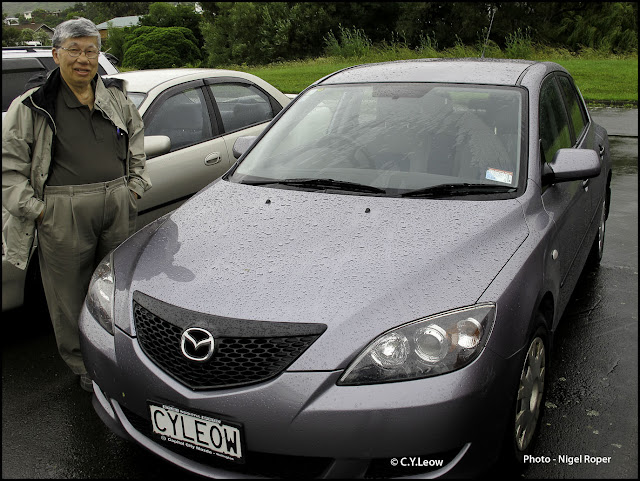 Saiyonara to my old friend :( 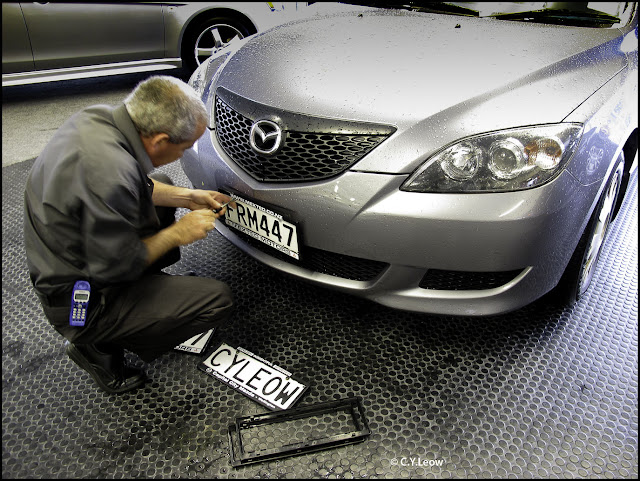 Ian putting on a new plate for my Mazda 3. 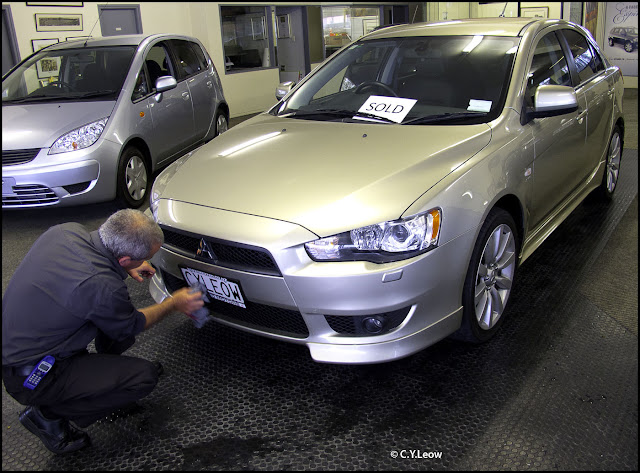 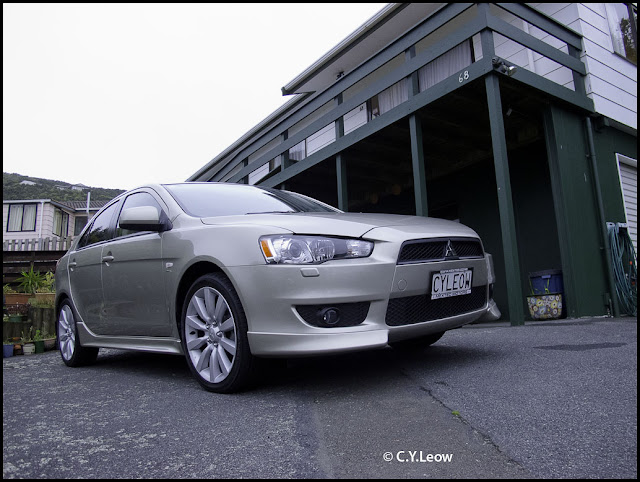 The aggressive looking Lancer VR-X at his new home in Karori. 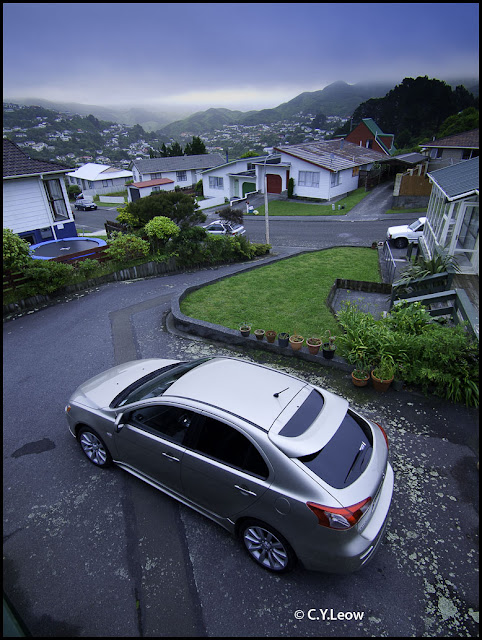 A misty Karori welcome for my new Lancer VR-X Sportback.

Like they say, history repeat itself... I started with a Lancer 33 years ago and life went a full circle and I am back with a Lancer.

Technically my Lancer VR-X Sportback is NOT new, it was driven by a dealer's manager for four months and have 10,000 km on the clock.

Transferring car ownership and number plates in New Zealand is painless and a no brainer. Just fill in a single form, go to ANY post shop and presto; instant gratification! Something to learn, Malaysian transport authority ;)

Email ThisBlogThis!Share to TwitterShare to FacebookShare to Pinterest
Labels: Car

Thanks CY for posting my pictures in the 70's, that time I was 25yrs old (now 59)....hahaha, still single. Yes you can say it again and again, those year in 1979...really can't remember, CY was a REALLY good and FAST driver, I remembered at 1979, I was staying at Sentul in KL, we all going back to Penang for the Chinese New Year celebration, that year I will never forgot the driving skill of CY, we left KL around 6am and by 10.30am we are having breakfast in Penang (don't forget the Plus Highway was not built yet, using the old road for a normal driver take about 6 to 6 and half hour), but CY was really super, just too bad he didn't took up GP racing or else he sure will replace Harvey Yap (Malaysia champion Rally driver in the 80's)...well done after 33 yrs you are back with Lancer, will you still be as fast as the younger years?..hahaha

CY is definitely a more sedate driver these days than the driver you describe from the 70's CH.
Still a 'boy racer' at heart though!