They Shoot Spider Don't They?

You might be wondering how all this come about... no, it got nothing to do with Spiderman :)

I was sitting on the carpeted floor watching TV while having dinner on our second hand coffee table when I felt a sharp pain on my lower right shin.

What do you know, I was bitten by a Kiwi spider and I am bleeding! The creature was squashed to a pulp when I felt the pain so I do not know what species it was, but knowing there are not that many poisonous spiders in NZ I felt pretty reassured!

Don't be so sure if you are living in Australia though :-)

I then remember the picture of a BIG spider I took at the Brisbane airport. Why in the world do I photographed a spider you asked. Story....

How do you kill time when you arrived at Brisbane airport at 6 am (Australian) and your connecting flight home to Wellington was 4 hour away?


They shoot spider don't they?

I saw this creature outside the airport window framed against a glorious Australian sun rise.

The effective focal length was actually more than 280mm because of the "crop factor". Full aperture was used. The camera was supported with a Manfroto Carbon monopod. Image was interpolated with Fractal Print Pro. 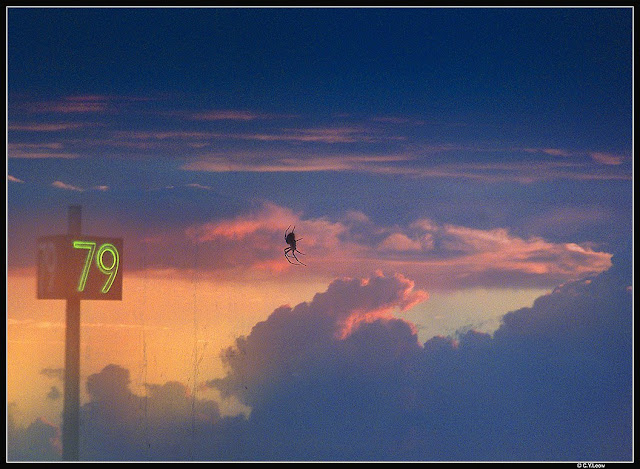 "I really hate spiders! This looks great against that sky. Perfect for Halloween. I would like to see a little of the web he's hanging on. Can a light line be added in PS? NEW THOUGHT adding a web line may make it look like the spider was added too. I would clone out the window reflections however."

"This is a weird idea but you catch it, great job!"

Still at the Brisbane Airport I took some shots of a JAL Jumbo arriving, same lens and same setup. 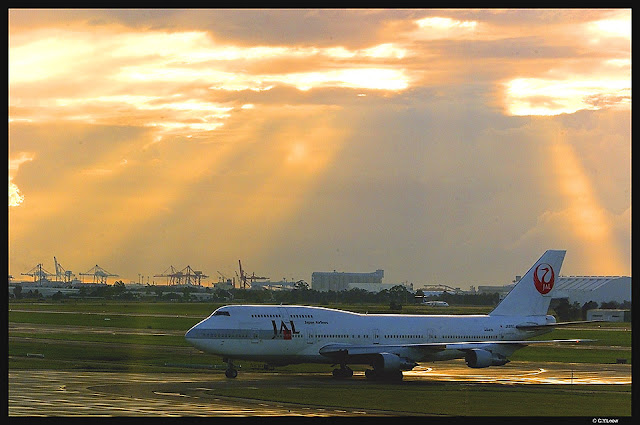 "Great photo. Love the colours and the location of the photo. Well done. Oh and by the way - don't forget to come back to Aussie one day, Queensland is such a lovely place. Chloe/Australia!!"

During my four years stint in Kuala Lumpur I always fly Qantas because of the air points.

There is nothing wrong with the "Flying Roos", but when it stopped flying to KL; I am in for a LONG HAUL! Did you know that I calculated it took me more than TWENTY hours to get from Wellington to KL?

This picture was shot through the huge glass panel at the waiting lounge. The "haze" on the left is the heat wave from the jet engine on the left. 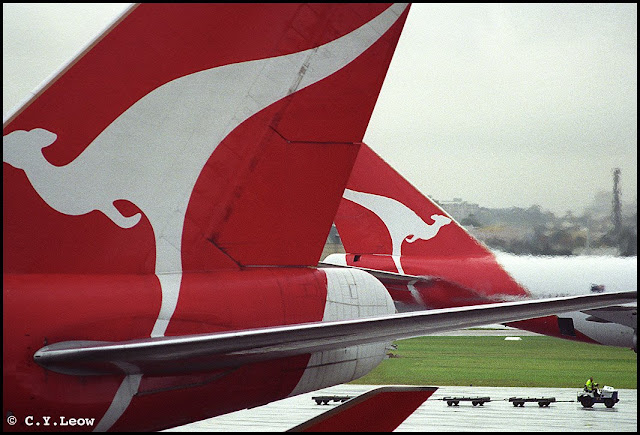 "Thanks CY, I love aviation photos. It's a pity that the sky is grey, but the composition is so nice. I like the heat wave, the 2 planes, and you even included the tug driver, clearly stated your style! Next time get the pilots, please?"

George Fay, a master pilot who train pilots point out:

"You're right... we fly boys love it! but the wrong airline and color! :) And a small correction... the heat wave is from the aircraft's APU (auxiliary power unit)...

yes, technically a small jet engine, but not used in flight on the 747. Oh, and I note you have "people" on the baggage tug on the ground! :) Nice composition and color."

So next time you are stuck in an International Airports, don't fuss; whip out your camera and go spider and plane hunting!

What about my spider bite? Well, I got a Band-Aid over the wound and wondering why I did not turn into Spiderman!

ha ha!! Bitten by a spider while you are eating! is that Kama or what? Maybe he/she thought you would be a tasty succulent meal.I like the spider on the window, I have every sympathy for spiders,They don`t realise that they are frightening to a lot of people. They only know how to be spiders.I like them, They are good for pest reduction.I think it would be great having to wait at an airport.. there is so going on,, the hustle and bustle and the "people watching"... not to mention the planes Great!