After my THIRD story on the revolutionary compression technology call HIPIX from Human Monitoring, I thought that is the end; or at least the end for a while!

I received another response from Ira of HM!

I really am sorry for not letting this go by, but I hate thinking that there is even one PSP user thinking we treated PSP wrong.

I have been using PSP at home for many years and it is beautiful. JPEG however has limitations.

Photoshop does not necessarily do a better job, but a more clever one - by putting a limit to the compression.

With PSP you can compress images of 12MP to 200KB getting these topographic maps, which Photoshop will prevent you from getting, but you'll end up with 350KB instead.

So here's a screen capture sequence of my coding session using JASC PSP7 (that's what I have at home).

You can see for yourself, single shot, no editing, resolution, size and all, how we got what we got.

Sorry JASC, COREL, Adobe, it's not you, it's the 8x8 DCT and Huffman with no spatial prediction and many other tools.

Hmmm... Ira also gave me a link to download an AVI clip showing the two photos being JPEG-ed by his Paint Shop Pro (PSP).


I got some screen grab from the AVI so you can see how he did it :) 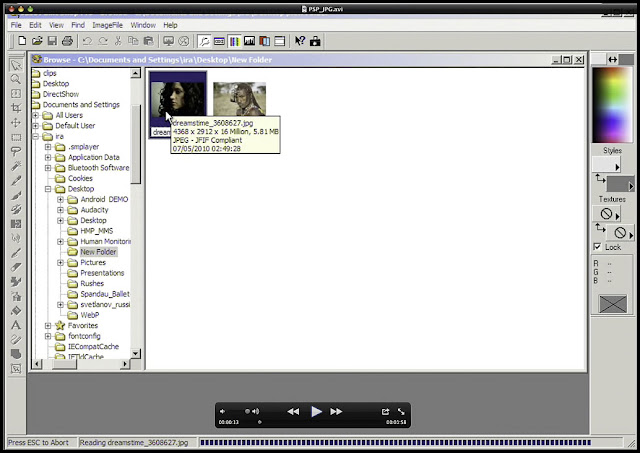 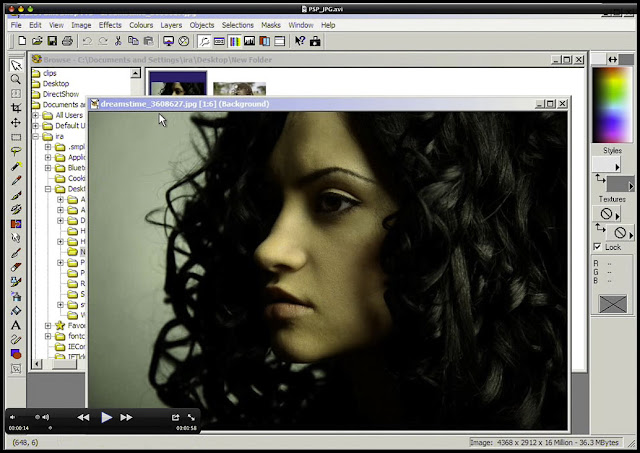 He open the picture in PSP and as expected, beautiful! After all, it is 16 MILLION colors! 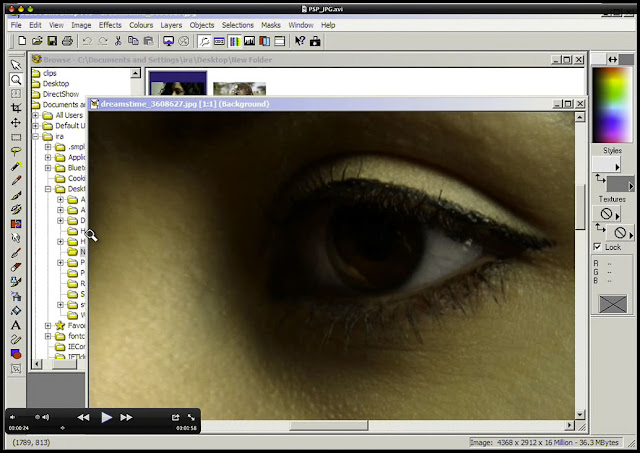 Well! He even zoom in to her eye to show us how SHARP it is ;) 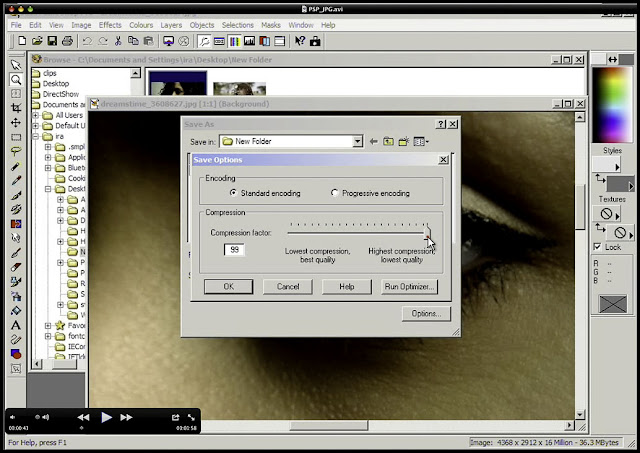 Now he save the beautiful face in JPEG, making sure the setting is of the HIGHEST compression and LOWEST QUALITY (why do anyone want to do that? For the lowest quality?) You must understand Ira is looking for the SMALLEST compressed file size! 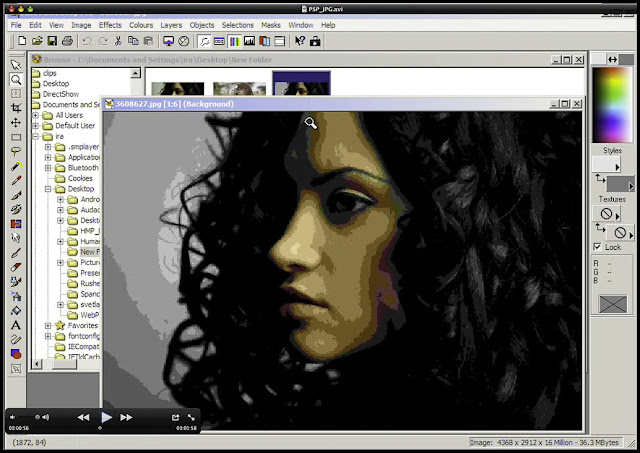 Arrrrggg! This is what you get! That is bloody awful! 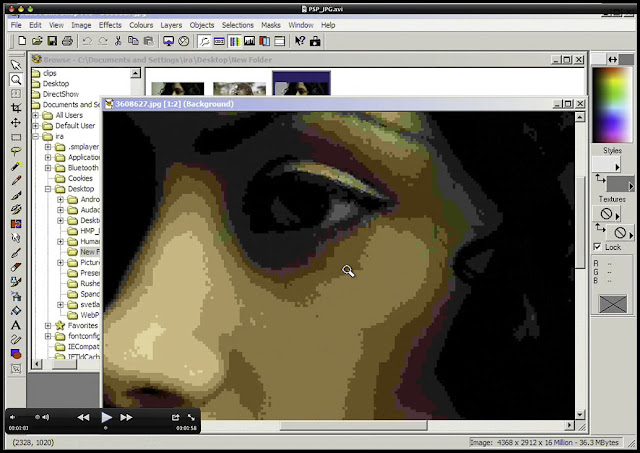 Ha ha ha... he even ZOOM IN to show you how BAD and how POSTERIZED the image became! 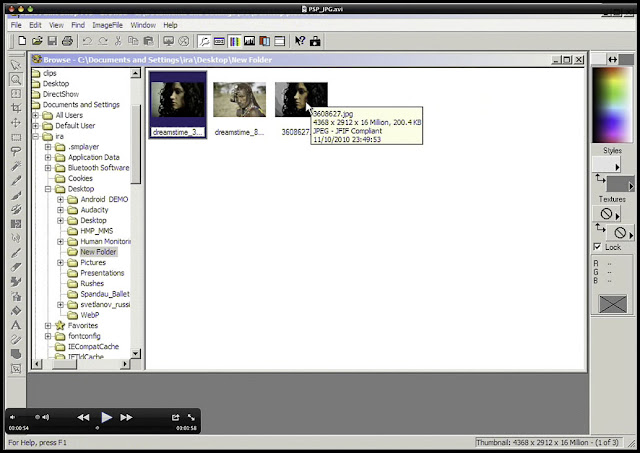 But now the compressed file is a minute 200 KB! Still million color and still complaint? Are you serious?? 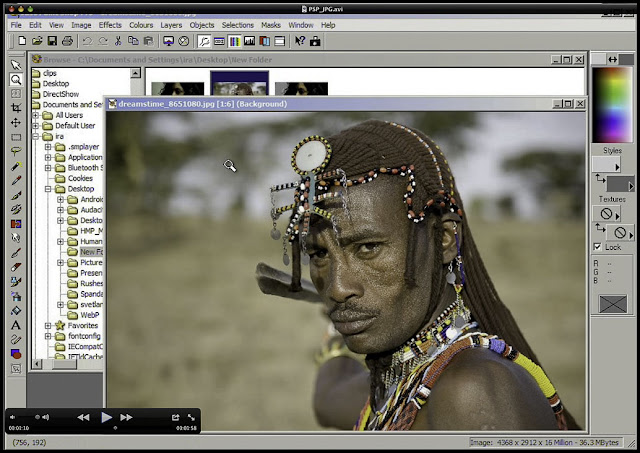 Just to show you how PSP can bugger up a perfectly nice photo, he open the picture of the Messiah. Nice photo, no? 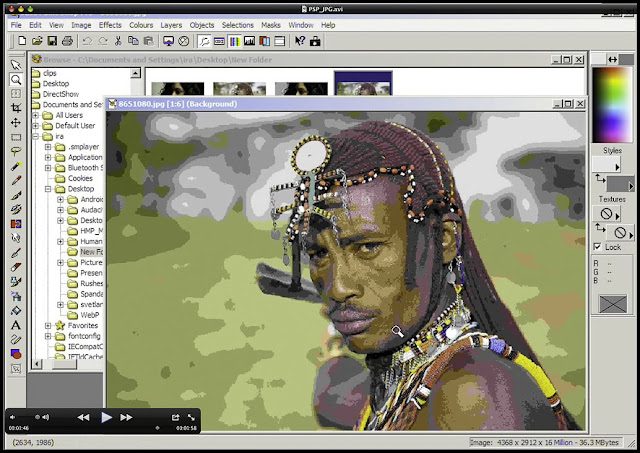 Not, after Ira save it in the same low setting! But then may be you like that psychedelic look? ;)

1) What is the point of this exercise? To demonstrate how bad PSP handle JPEG compression?

2) A reader accused your company for using these badly posterised (banding) files as a marketing stunt, what is your response?

3) Should you not "compare apple with apple" and use a more robust software like Photoshop to compare?

4) Is HIPIX the only compression software that give the SMALLEST and the BEST LOOKING compressed file?

Just for interest sake I also pick out my "Pretty Face" for testing, but instead of PSP (which is PC only), I prefer my favorite; Photoshop. 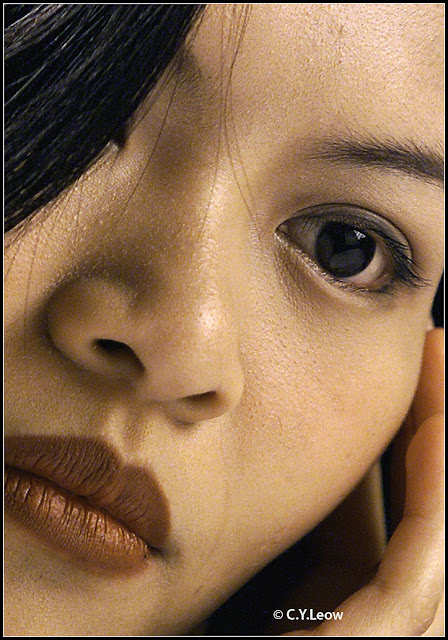 Fannie Kong, model for a tungsten studio light demo. I shot her with the Kodak DCS 520 2 mega pixel digital SLR, the quality was unbelievable! And that was in 1997!

File size of my Pretty Face is nearly the same as Ira's Pretty Face. I will now open it in PS-CS5 and re save it at the LOWEST Q1 setting.

This is the result... 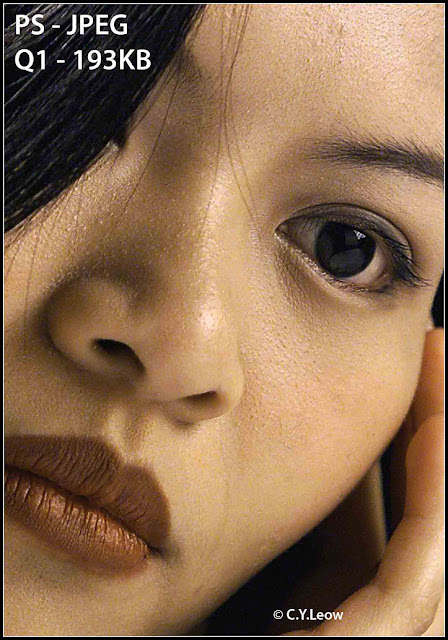 Wow! That is the HIGHEST JPEG compression in Photoshop and the file size is only 193KB, but unlike PSP; there are no visual posterisation. Unless, when you zoom in... 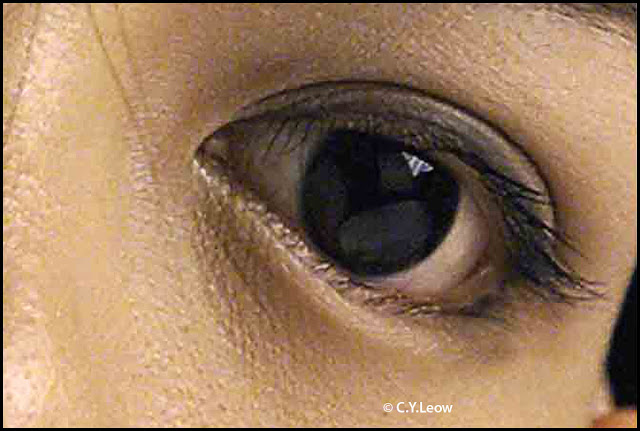 Yes, there are some banding; but the image is still pleasing to view!

Photoshop beat the hell out of Paint Shop Pro! Any wonder what most photographer use? 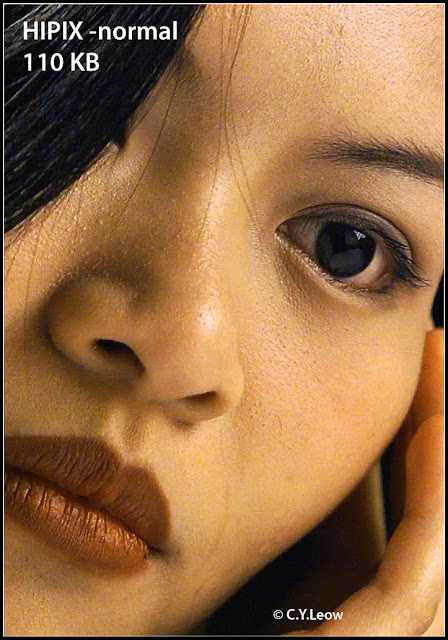 FANTASTIC!!!! And that is from a mere 110 KB HIPIX file! Double bloody well done!!

What about a 200% slice ala Photoshop? 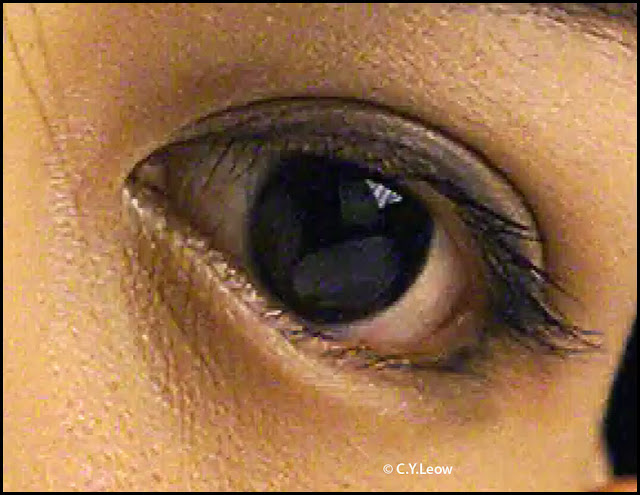 Now you have seen how good your HIPIX is, even against Photoshop; winning by a clean margin... do you REALLY NEED to use those badly banded PSP files to show the world how great your software is? ;)

Please look forward to my invoice and a fat bill for the test :) Ha ha ha... JUST KIDDING!

As you probably notice, the Photoshop & HIPIX pictures colour are different, I think this is due to HIPIX saving in BMP format only. Hopefully when the none beta version appear, the Mac version will be able to support more file format.

It has been a really interesting THREE days, I must have spent a total of more than 22 hours (on & off) for these HIPIX / HM encounter!

But in doing so I learn quite a bit on compression and JPEG heaven & hell ;) Like they say, knowledge is power!

Oh... I also found out how Photoshop did a better job in pressing JPEG, but that is another story!

Disclaimer: I do not work for or connected to Human Monitoring in any way.
Posted by cy.leow at 7:09 PM

Dear C.Y.
Let me reply to your four questions.
1. The point of the exercise was to show that Hipix can produce acceptable quality at file size where JPEG cannot. Many applications (Web, MMS, remote consultation) call for the lowest possible file size for acceptable image quality. Google spotted and aimed at the web optimizing with WebP, we feel that a real solution should offer a unified format, which does not call for extensive conversions. Our execrsize proves that Hipix provides such a solution, which is compatible on one hand with HTML5 (with h.264 support), and can utilize the existing HW accelerated H.264 CoDecs on mobile devices. Mind you, the Hipix quality on Android is 99% equal to the PC one.
2. What we presented is far from a stunt, since the point to prove was as detailed above. One major aplication we are getting our IP into, is the cellular imaging. If you want to send hi-res (5;8;12.1MP) photo over 300KB max (MMS) this is not a stunt but a real case scenario. The current status is that when (if) you send MMS, your hi-res photo is usually downscaled to VGA (640x480), since the embedded JPEG is far from PSP and Photoshop quality.
3. Photoshop is great for comparisons, and I take your advice. Once we'll have the Photoshop plugin, we'll prepare a Photoshop gallery.
4. Hipix is the only compression software, which is compatible with the existing infrastructure of many millions for ASICS and HW accelerated encoders/decoders. Hipix is similar to QuickTime7 in the sense that we are in the container. Our IP lies in the feeding and stitching parts of the CoDec. We are also the only stills compression format I know of, allowing standard CoDecs use for audio (AAC), picture (H.264) and package (mp4) for "speaking pictures" applications.

You should utilize "Ctrl" on the keyboard so as to add a batch of information collectively. Even, this software helps a handy perform - Add folder. When all Workplace wanted to transform is put in a single folder, utilizing this perform to avoid wasting plenty of time. Good click on in "File identify" area, a field exhibits up so that you can choose goal information. If you want to learn more about this topic please visit onlineconvertfree.com