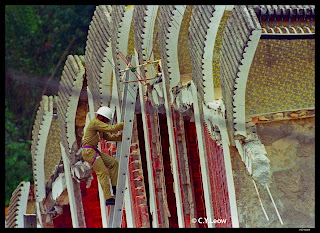 On December 11, 1993; after 10 continuous days of rainfall, Block 1 of the Highland Towers collapsed.

The Highland Towers were three blocks of 12-story apartment at Ulu Kelang, built in the late 1970s at the western base of a steeply sloped hill, it was later terraced (extensively in the early 1980s) for proposed bungalow developments which were never completed.

A swimming pool was located between northwest side of Block 2 and northeast rear of Block.

Ten continuous days of rainfall caused the retaining wall at the Tower's car park to fail and this led to a landslide . The landslide swept away the foundation of the building and Block 1 toppled over.

The Highland Towers Tragedy claimed the lives of 48 men, women and children (including an infant).


At that time I was head hunted from New Zealand and working as the Picture Editor for Singapore Press Holdings (Chinese Newspapers Division).

I was sent from Singapore to cover the tragedy because I have been working with Malaysian paper since 1974 till we migrated to NZ in 1988.

So for 5 days and 5 night I was stuck at the site with dozens of photographers and reporters.

After checking into the Hotel Merlin in KL, I took a taxi to Ulu Kelang.

Police blockage at the foot hill forced me to walk all the way up the hill where the Towers are!

When I finally made it to the top, all my media friends were laughing at me because I was looking "near to death"!

At 48 yr old then, and out of shape; climbing up that hill lugging a huge Tenba Pro Pak camera bag containing:

AND a Manfrotto tripod! 5 kg

One hour climb with 20 kg on your shoulder can kill you too! In some way I was secretly happy and proud that I did make it! ;) 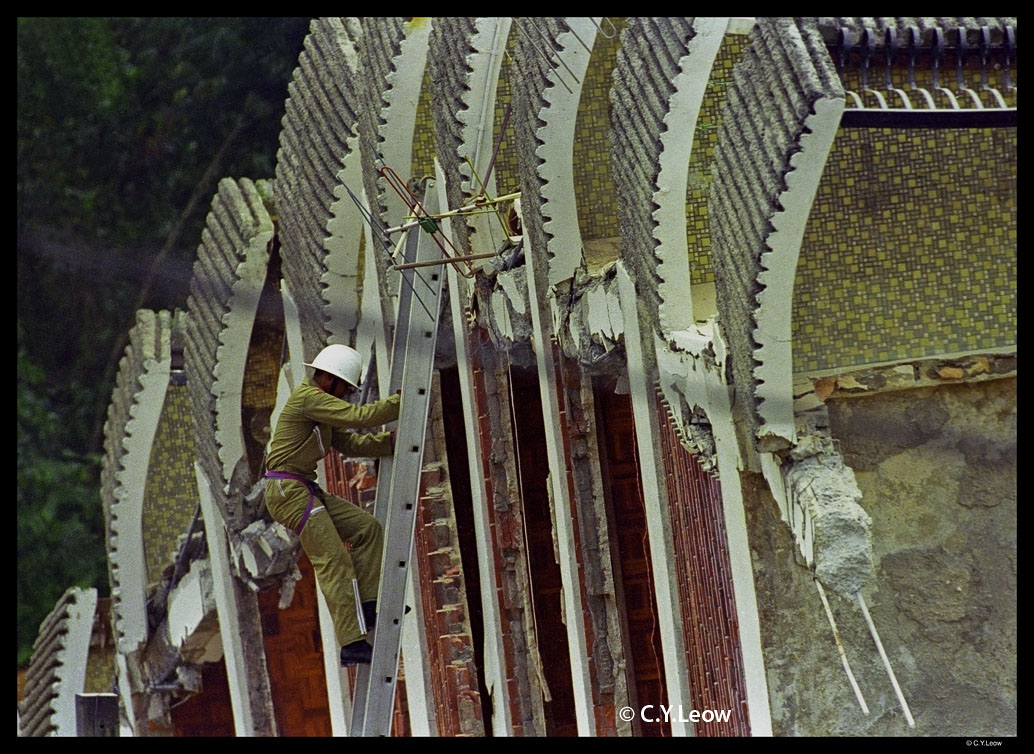 After catching my breath, I managed to set up my tripod and the 600 mm lens to capture this shot of a rescue team member from Malaysia scaling one of the collapsed Tower block.

It was as if the condo block toppled nicely on the ground! I have no idea where those 48 were trapped :( 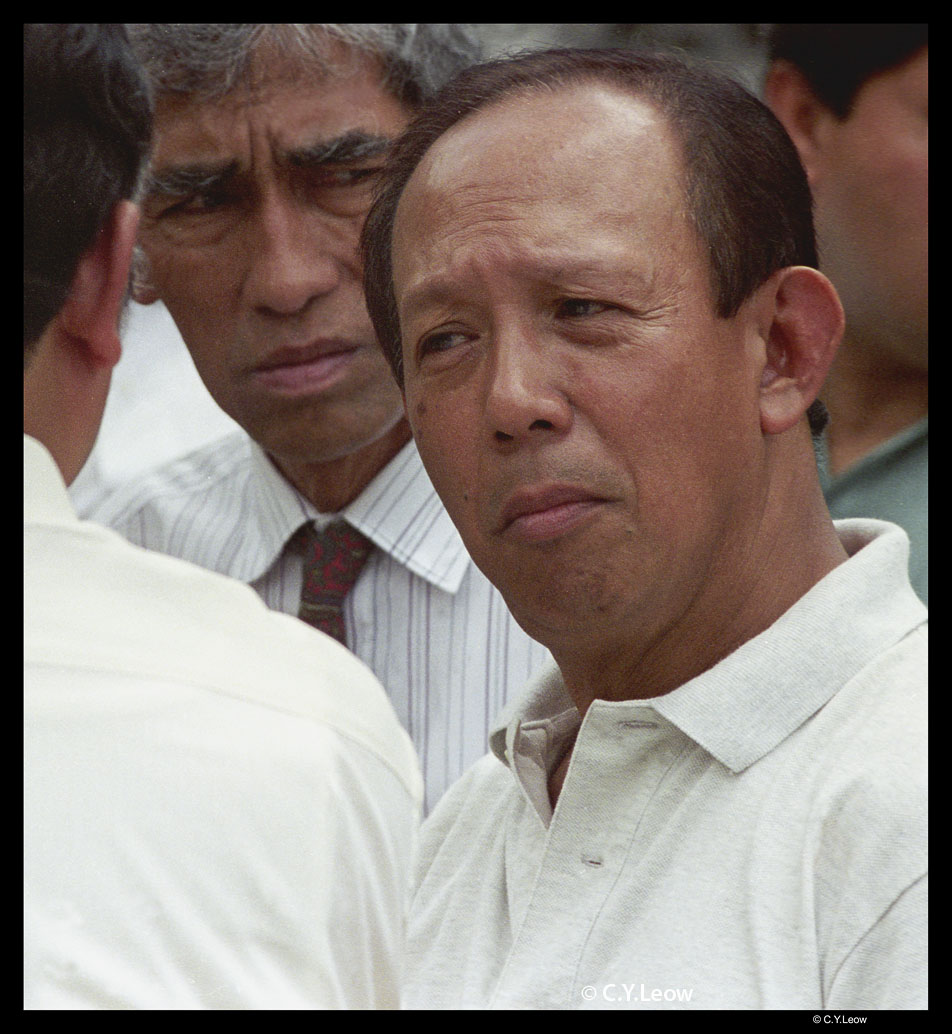 I don't think any other photographer had this shot, as far as I know I was the only one with that kind of "fire power". This shot was taken with the mammoth 600 mm lens PLUS a 2x tele converter to achieve a whopping 1,200 mm telephoto!

This picture was never used. 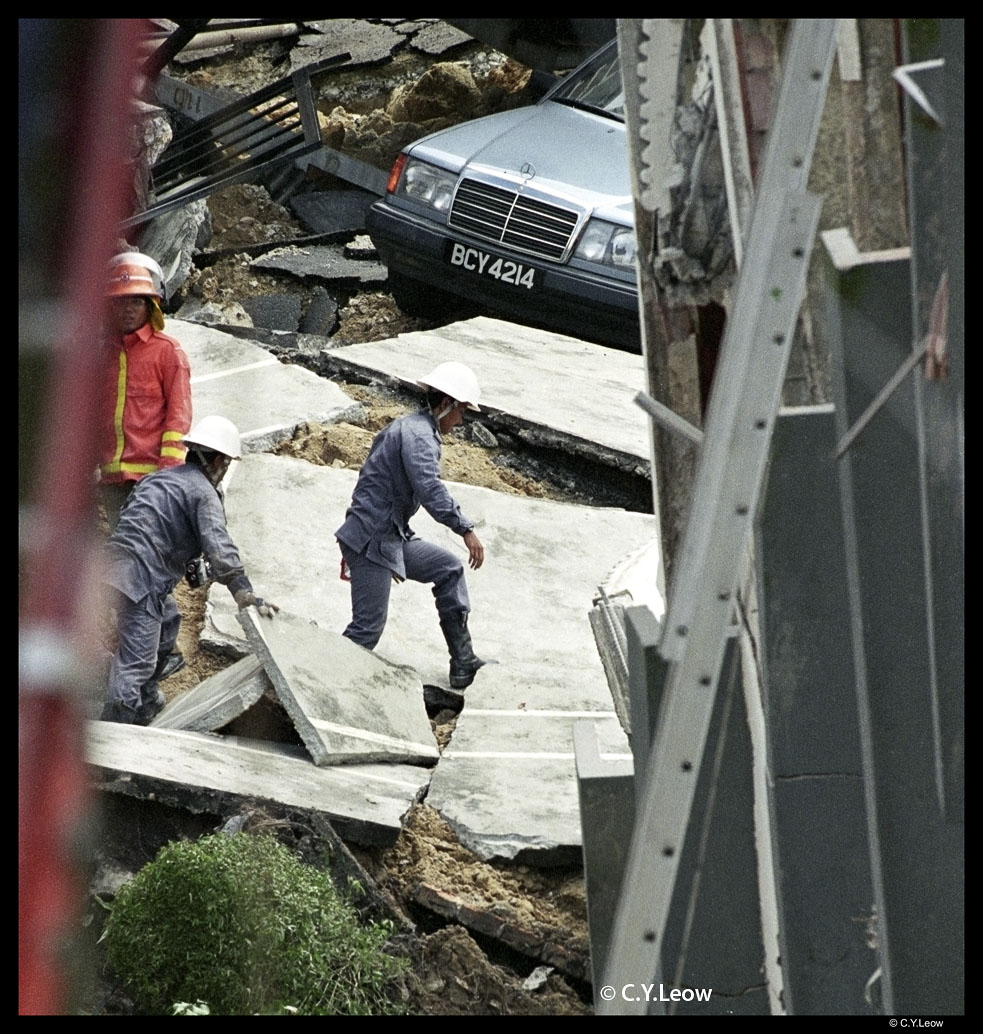 Firemen checking the garages at the collapsed block where many luxurious vehicles were destroyed.

To the superstitious Chinese, the blue car with the "BCY4214" plate must have brought the owner bad luck!

Alfa Romeo found out the hard way when they launch their model "164" in Asia, the sales was a disaster because to the Chinese, 164 sounds like "die on the road"!

I was told that Alfa actually changed their model to "168" which sound like "prosperous all the way" just for the Asian market!! 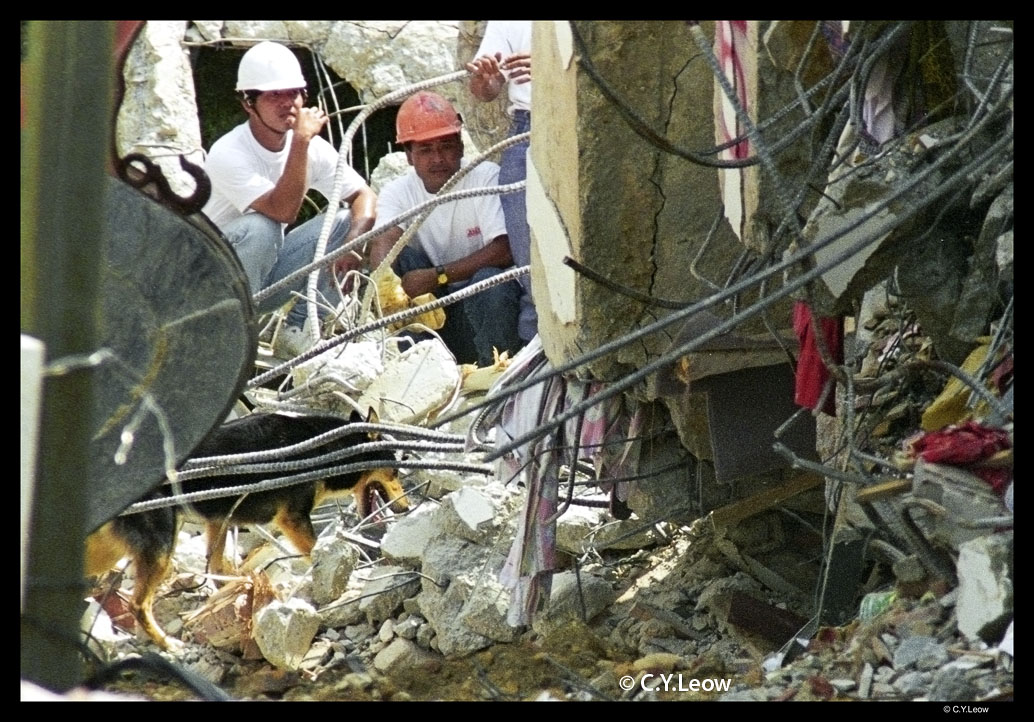 Rescue team members from Malaysia checking the collapsed block with the help of man's best friend....

The media covering the tragedy were "shut out" from the scene, hundreds of meters away.

This picture was shot with the huge 600 mm f4.5 lens plus a 2X converter on a heavy tripod. Even at an effective 1,200mm focal length, 75% of the negative had to be cropped away to get this image. 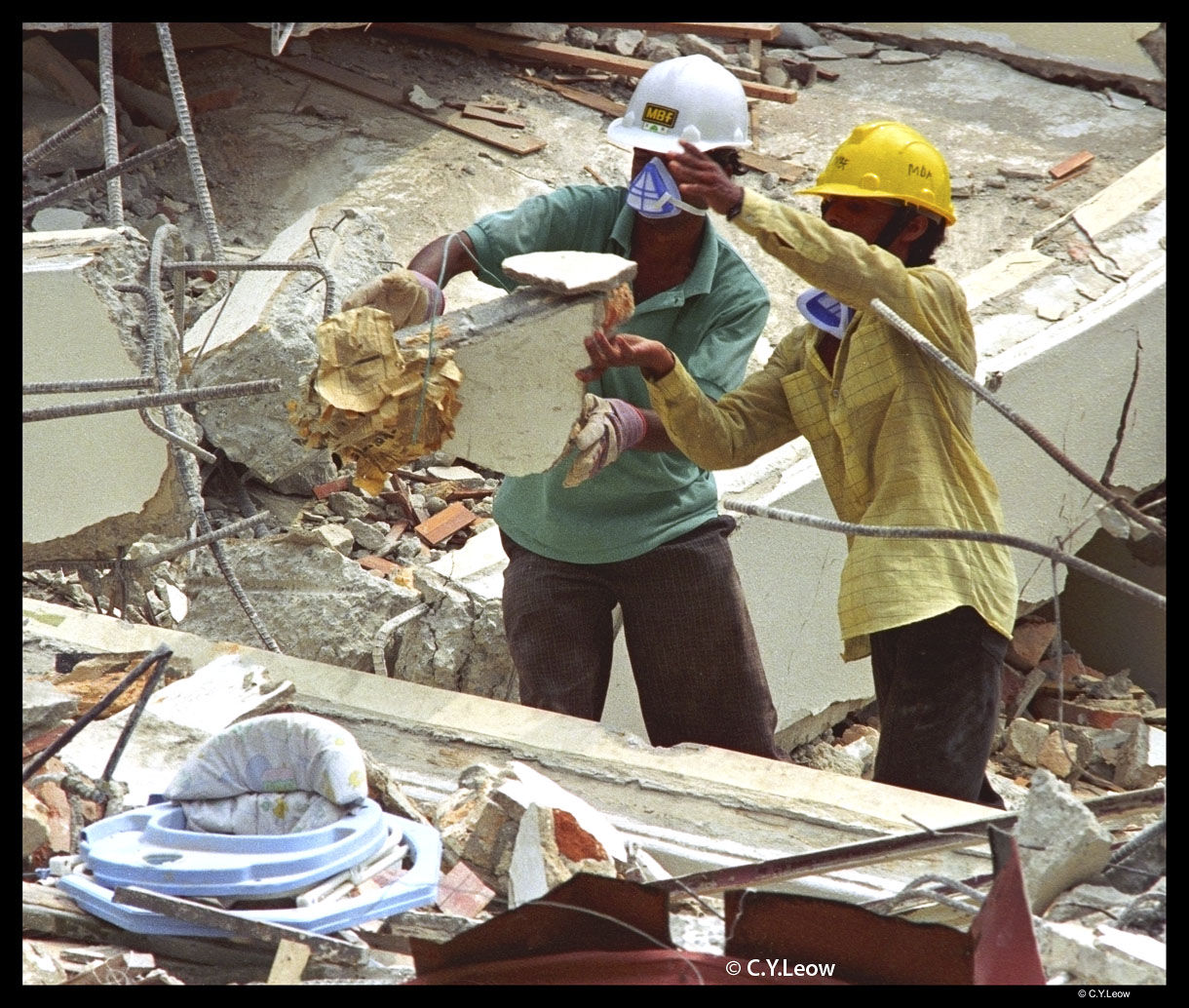 The horror of the collapse hitting home.....rescue team members found a baby walker together with other belongings from the collapsed block.

This picture was taken on my second day there.....not wanting to suffer a heart attack, I left the monster 600 mm in the hotel and took my 300 mm f2.8 and a 2X extender which captured this scene. 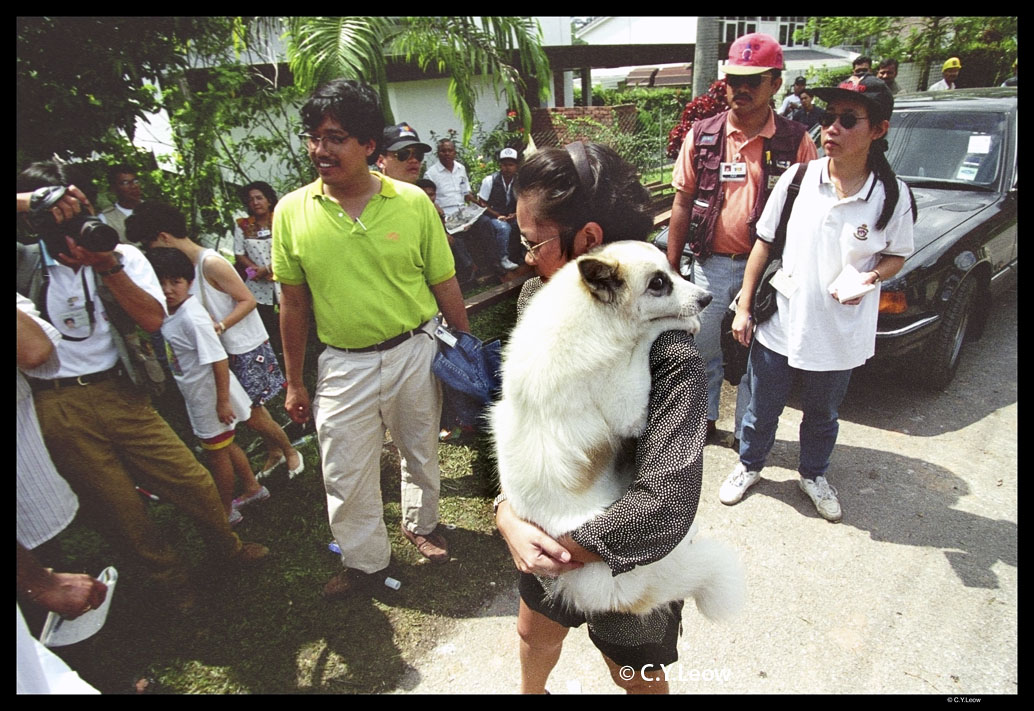 Much to the delight of her owner, this lucky pet was found unharmed wandering near the ruins of the collapsed tower.

Much to the distress of the dog though, she was being hounded by the huge media circus at the site!

Beat me why so many local press photographers shooting from the wrong side! 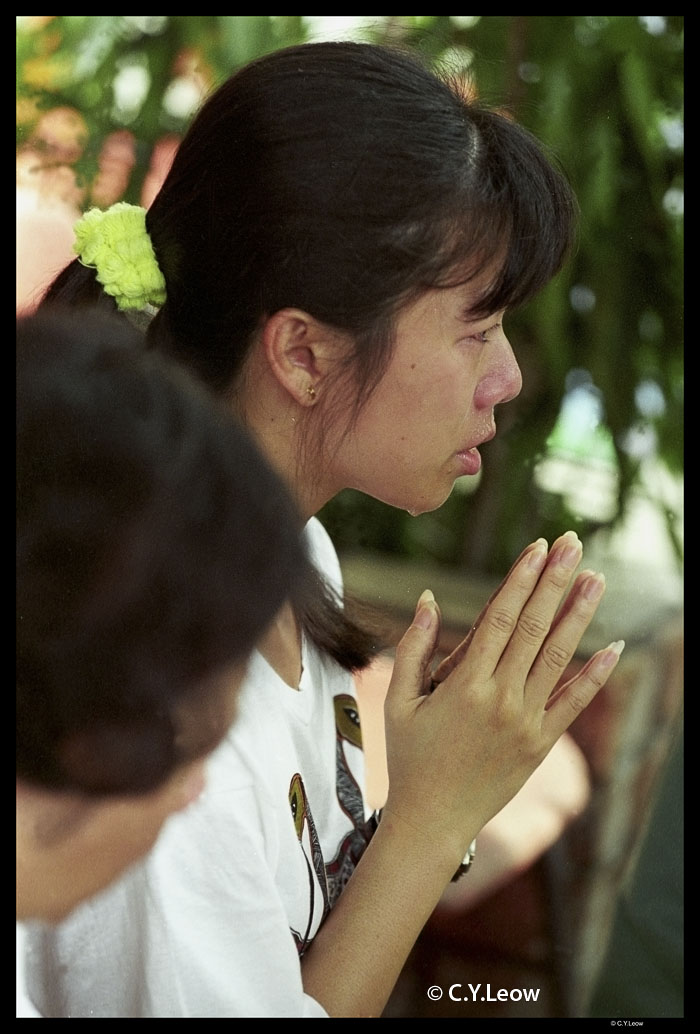 A heart breaking scene, praying and grieving for lost relative. 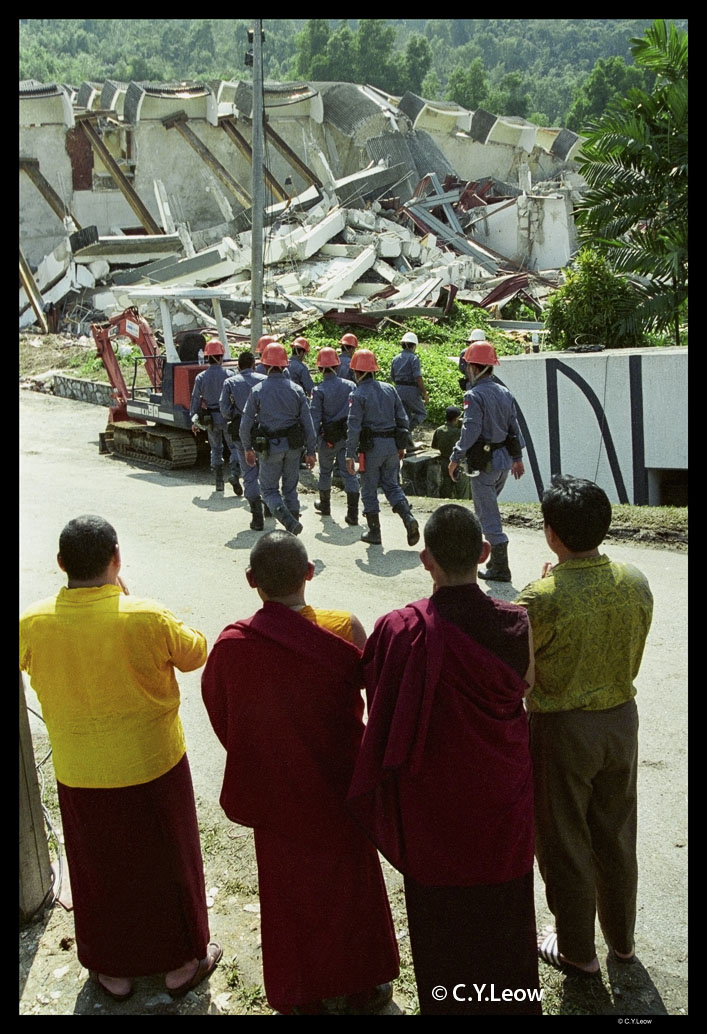 DART, the famous search and rescue team from Singapore move in to help, divine intervention were also summoned to support. 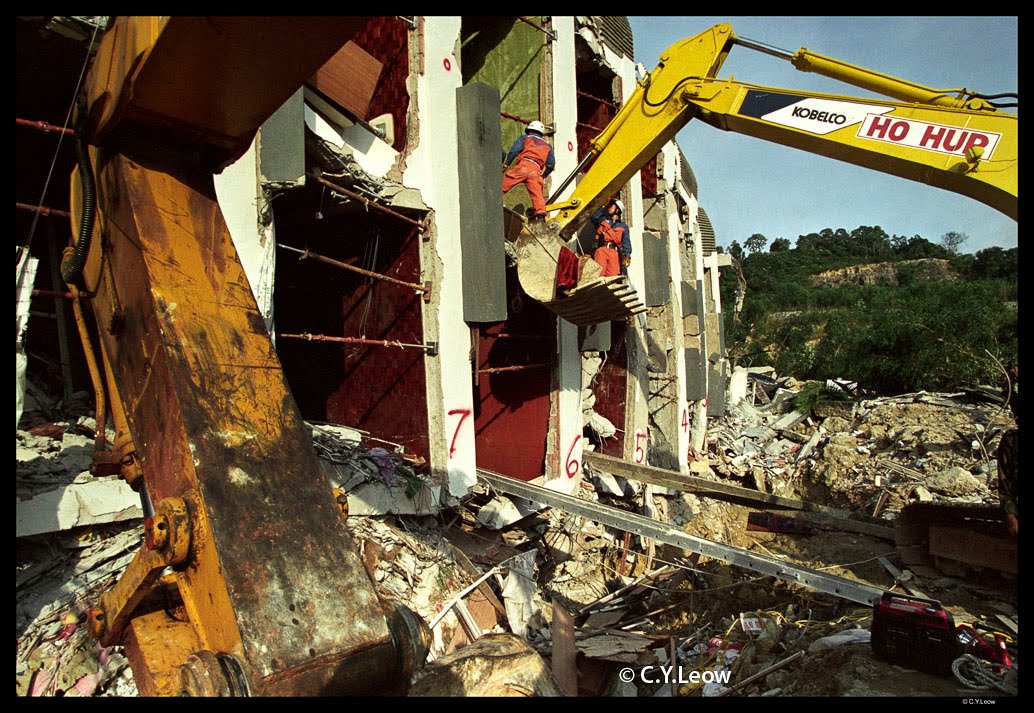 A rare 10 minutes when the media circus were taken near the site where bulldozers dredges. It was here that we got a strong whiff of decaying bodies!

I was stuck at the site with dozens of photographers and reporters. Hiding from the pouring rain under a shed at the Highland Tower site when news came that the rescuers think there are survivors!!

At the corner of my eye I noticed some relatives and friends behind me were holding hands for moral support.

I swung around and grabbed one single shot with whatever lens that was attached to my EOS-1....damn!...it was the 70-210 zoom!

No chance for a second take because I was nearly attacked by the person next to me!!

Obviously he DO NOT want any picture taken of those people inside the shed!

Not knowing if I got the shot, but dying to find out; I walked into the down pour and headed down hill!

It took me two hours standing in the torrential rain before a cab agreed to take me to my hotel, "at a special no meter fare" of 150 Ringgit!

You should see the faces at the hotel reception desk when I sloshed in, leaving a long trail of water behind! Ha ha ha.

Thanks to my Tenba Pro Pak,my cameras and lenses are all bone dry!!!

I rushed to Reuters KL office after a quick change of clothes, my ex colleague and prodigy, CH Goh got all my film processed and lo and behold, I got ONE shot of THAT moment!

Due to some glitches, the transmitted image took hours to reach Singapore!! 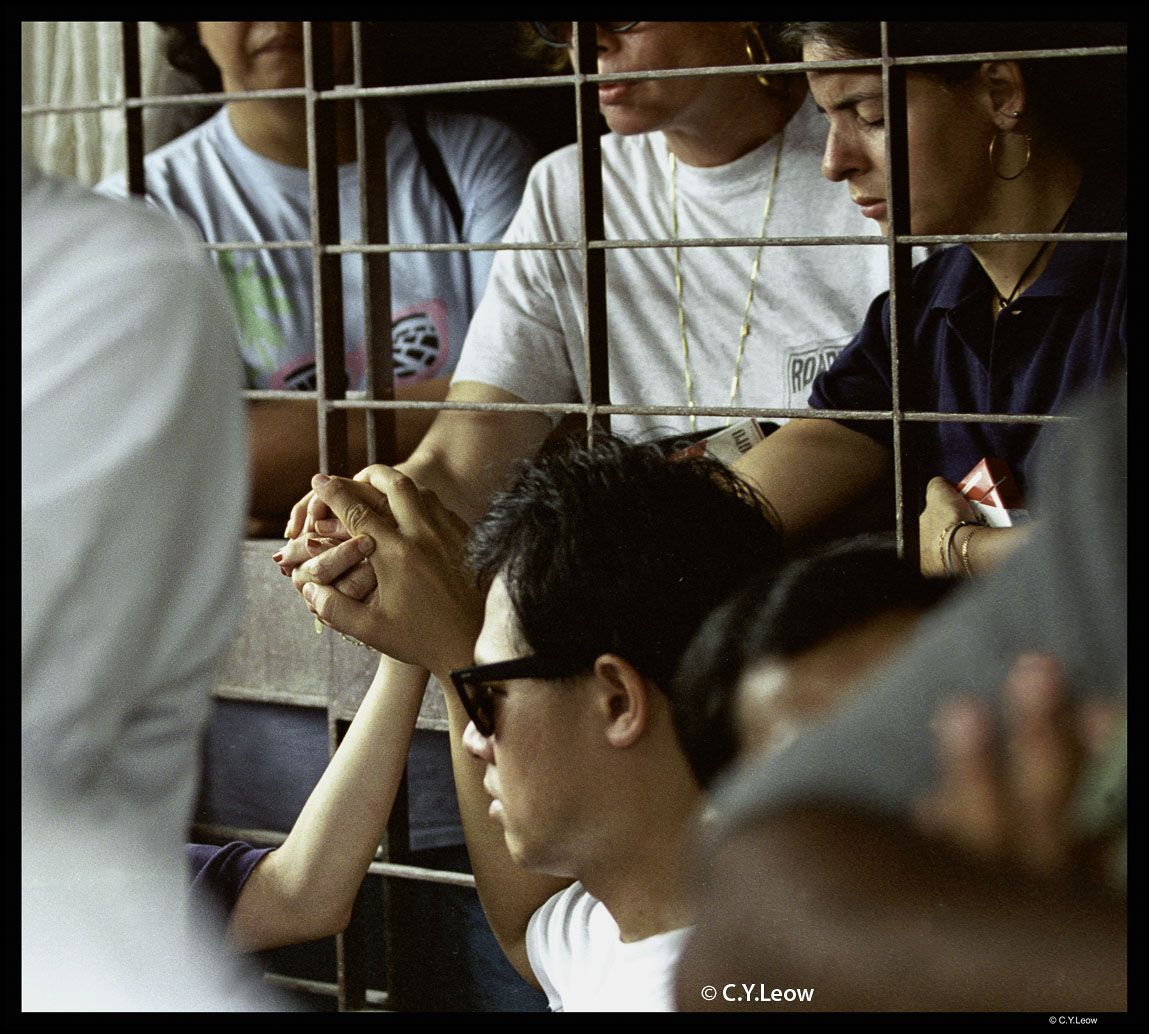 This symbolic and exclusive picture was ran big next day on the front of the Singapore paper I worked for with a heading: "I Am Still Alive!"

Alas, it was a bungled and heart breaking announcement from the rescue team!

The Malaysian translator translated the message from the French team wrongly!

How the hell they translated "I think I heard a knock!" to "I think someone is alive!" I never know!

Every newspaper in Malaysia and Singapore (except the New Straits Times, rumors has it they knew about the cock up) had the same heading and had to apologise the next day! 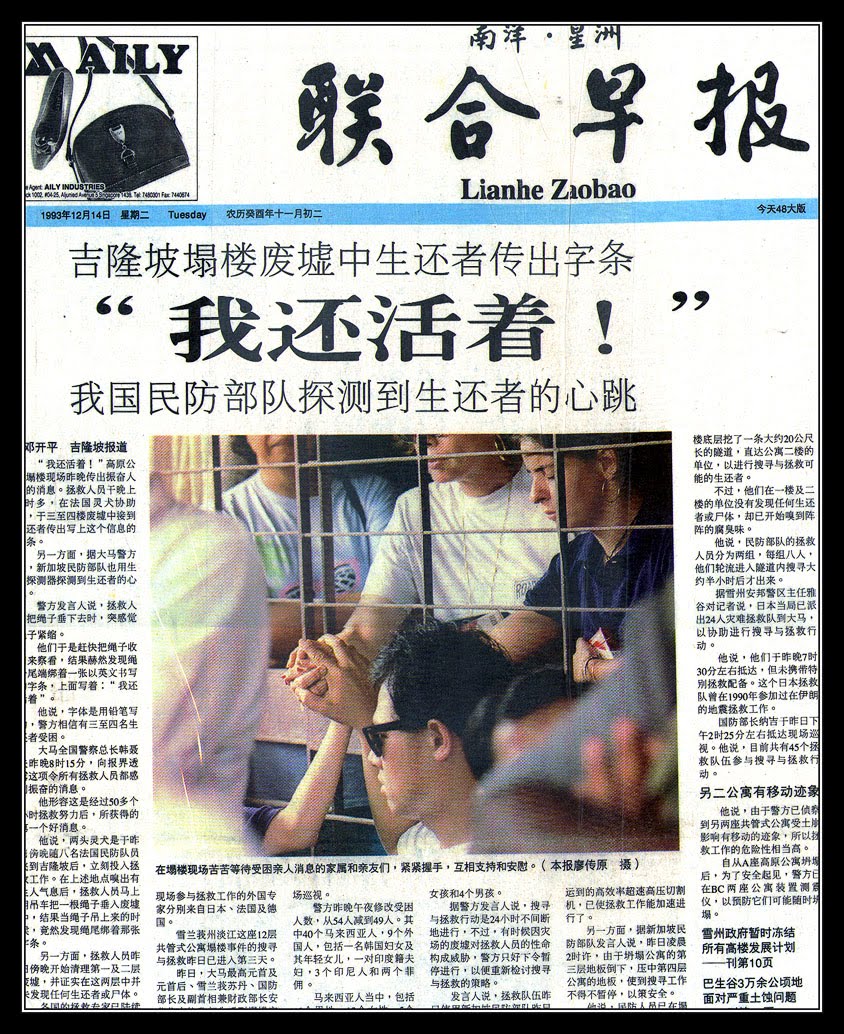 The front page of the Singapore paper, Lianhe Zaobao with my exclusive picture.

A few years ago I got these comments when I post this story somewhere else.

"The fact that the carrier is collapsed makes us think a baby would have no chance . A difficult assignment. but we know you can deliver the goods.

Great expression on the dog, I feel sorry for the other photographer in the image, there is nothing worse than being on the wrong side of the lens in a great photo, I'm sure you know what I mean Leow. congrats on a great job.

Dramatic stuff. Leow, we photographers get no thanks for our efforts at the scene of accidents etc, they just want results. well done!!"

"This shot would stand alone as a documentary classic without the explanation.

The shapes created by the fallen building and the precariousness of the rescuer's position give a real sense of capturing something very dramatic."

"This is good photo journalism and your explanation brings the attention to inclusion of cultural superstitions.

The composition is very good and my heart goes out to the lives lost and the time you spent covering this story. Must have been hard."

LETS HOPE WE LEARN FROM OUR MISTAKES!

The Highland Tower tragedy which investigators said was caused by the follies of human for cutting down trees at the hill site and during a none stop rain in December 1993 created a massive landslide which swept away the foundation of the building..... The Highland tower Tragedy claimed the lives of 48 men, women and children (including an infant).

Deforestation due to unconstrained development of hill-slope areas are partly the cause of a majority of landslides in Malaysia. There were some instances where the development projects at hill sites were abandoned for a considerable period, affecting the maintenance of the slopes could causing them to collapse.

The fabled Tenba Pro Pak camera bag, they don't make them like that any more! 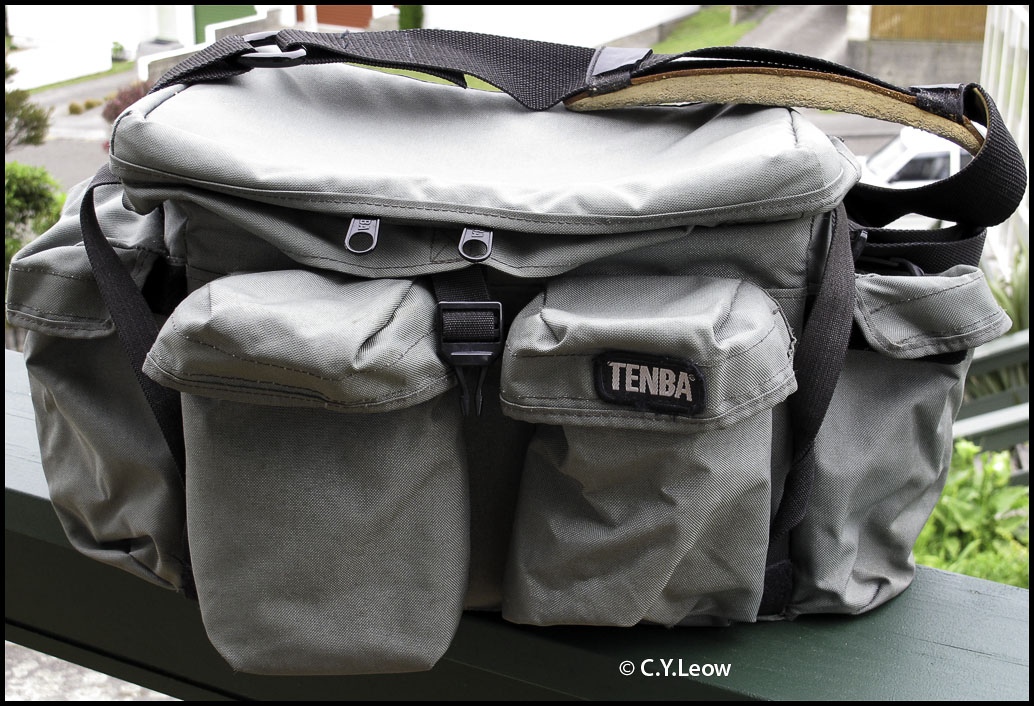 Bought my P595 in 1987. It's been in all kinds of conditions and has been an excellent camera bag. It just keeps on doing its job and doesn't wear out. Even though it's now nearly a quarter-century old(!) I have no plans to replace it. Don't need to. I have several other Tenba bags of various types and when I need another bag, it will certainly be a Tenba, of course.
Strengths:

Capacity, pockets, durability, reliability, quality, ease of use, everything.
Weaknesses:

Why do they stop making things that work?

John Ishii commented on my
link via FB.

Nice photos.I remember when that happened, It is a shocking thing when something like that happens. I can imagine to be a photographer at a scene like that would be walking a narrow line not to become voyeuristic and sensationalist at the cost of people`s dignity.I hope architects and builders learned from that tragedy and building codes have been chnaged.

I don't think Malaysians really learn from this tragedy!

Clearly, the lessons of the Highland Towers tragedy 15 years ago have not been learn by anyone, least of all the various government agencies!!