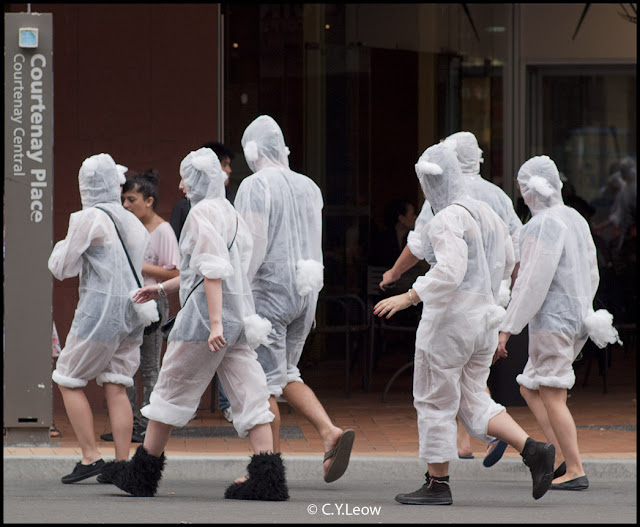 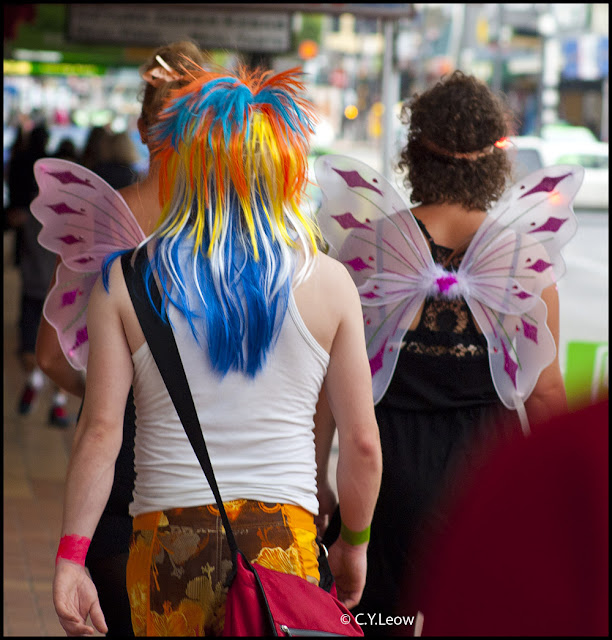 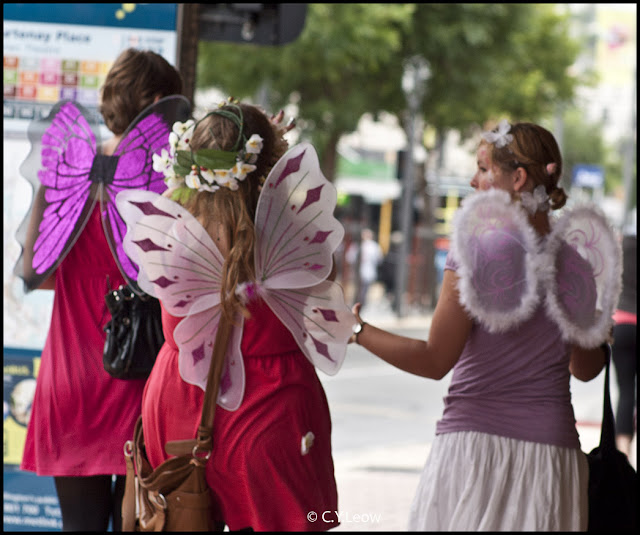 Fairies wings are very popular for the girls :) 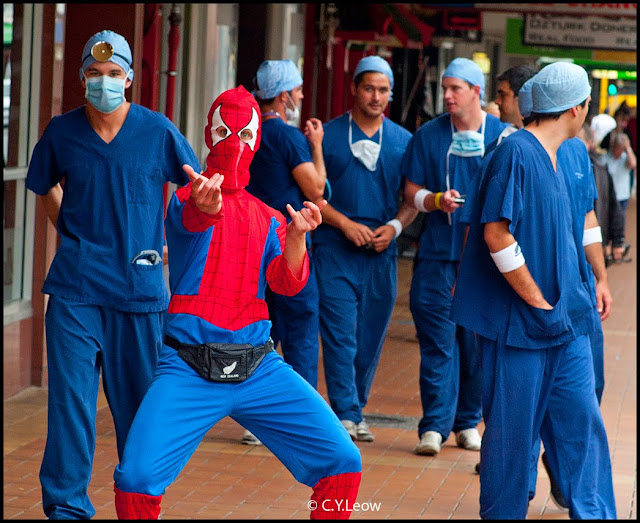 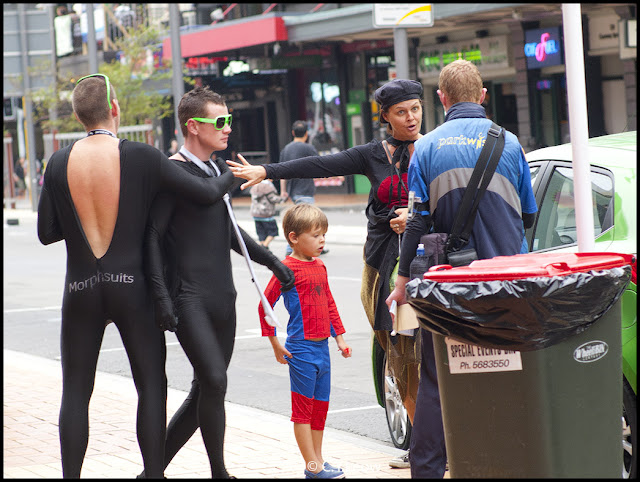 Past 5 pm and this green Mazda 2 was still parked inside the clear-way area, two "super heroes" trying to take on a council parking warden for issuing a parking fine on the car! 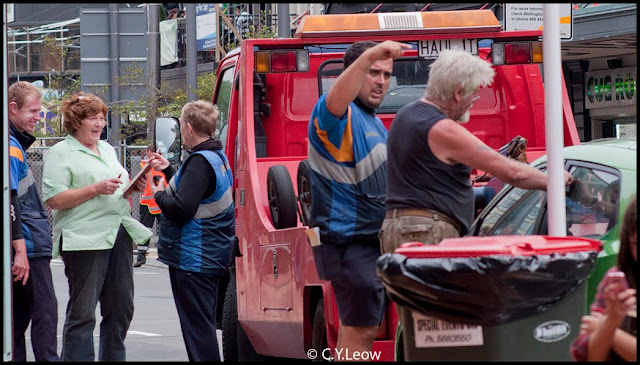 More reinforcement for the parking warden. Here you see the tow truck driver "broke into" the green Mazda, he released the hand brake and towed the car away. 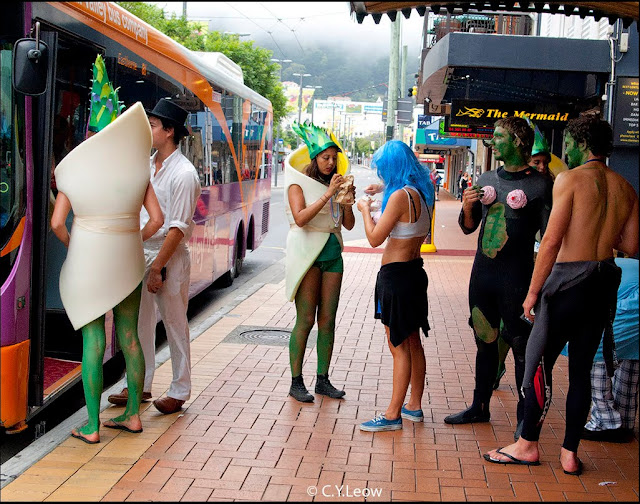 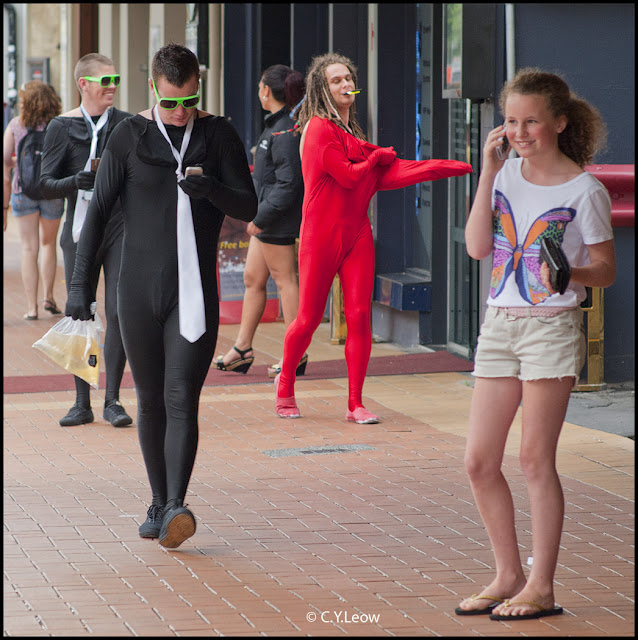 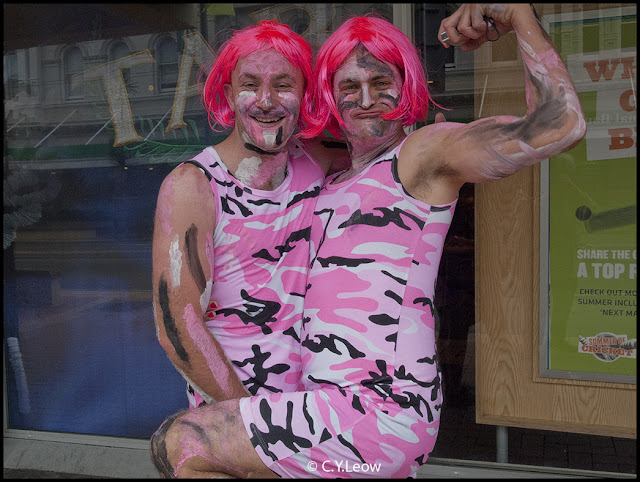 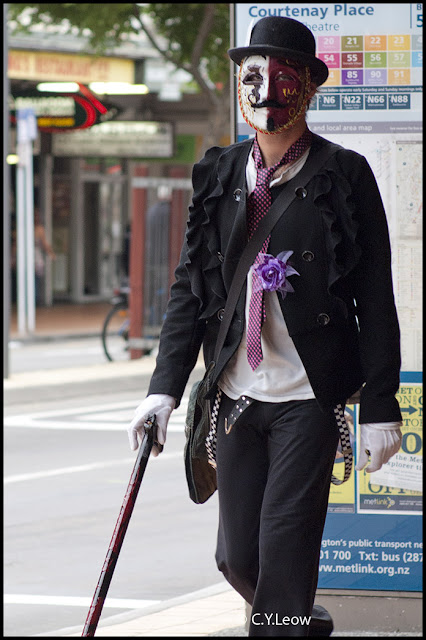 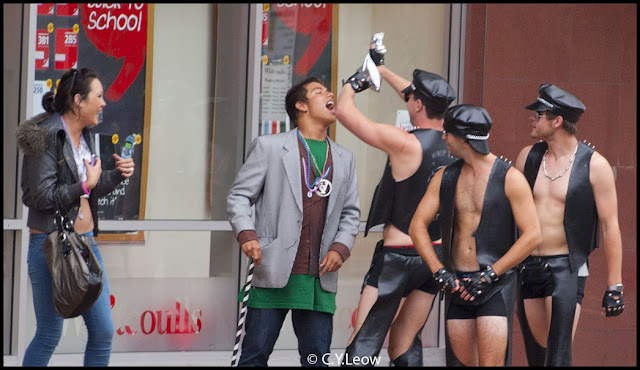 These are only a very few examples of what Kiwis indulged in during the Rugby Seven games every year. To views hundreds of dress-up pictures, go here!

This was the invitation email to all the members..


From: New Zealand Malaysian Society [mailto:nzmsiansoc@gmail.com]
Sent: 08 January 2011 13:54
Subject: NZMS Chinese New Year 2011 festive dinner invitation
Everyone,
New Zealand Malaysian Society (NZMS)
would like to invites all of you to join us in welcoming the
Chinese New Year of the RABBIT 2011
with a festive dinner
Venue: Regal Chinese Restaurant, 7 Courtenay Place, Wellington

After we paid the $39.00 (per person), we received these beautifully designed and printed tickets! 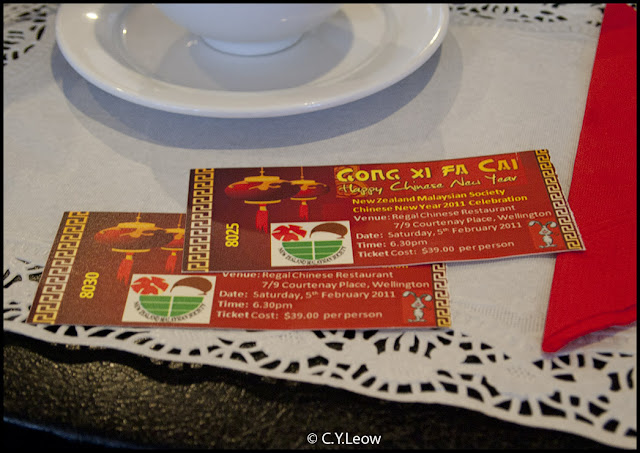 I discovered that these tickets were designed and printed (with his own money) by one of the committee member! Kudos!

As per Malaysian's tradition and time, the dinner started rather late.

Mercifully, there were only three speeches; one was rather over lengthy and I can see the "hunger" on many faces ;)

The short but entertaining speech from Peter Dunne, Revenue Minister; brought home the ineffectiveness of Malaysian's speech giving, a skill we desperately need to learn! 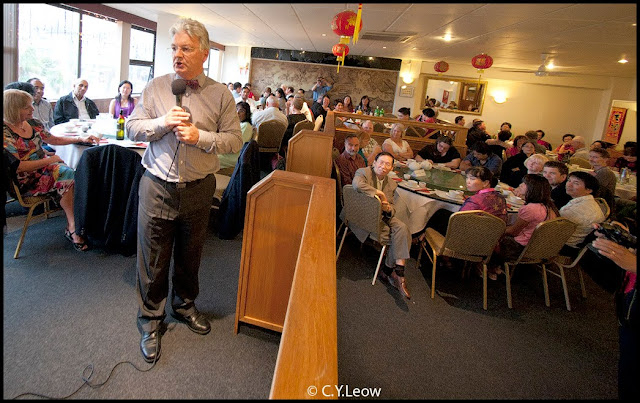 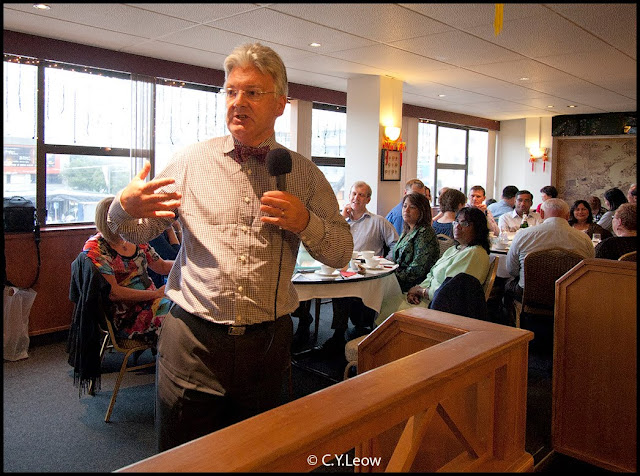 Peter Dunne whetting up our appetite with his speech.

This was the menu:

It usually consists of strips of raw fish (most commonly salmon), mixed with shredded vegetables and a variety of sauces and condiments, among other ingredients.

Yusheng literally means "raw fish" but since "fish (鱼)" is commonly conflated with its homophone "abundance (余)", Yúshēng (鱼生) is interpreted as a homophone for Yúshēng (余升) meaning an increase in abundance. Therefore, yusheng is considered a symbol of abundance, prosperity and vigor.
While versions of it is thought to have existed in China, the contemporary version is created and popularised in Singapore in the 1960s amongst the ethnic Chinese community and its consumption has been associated with Chinese New Year festivities in Singapore as well as in neighbouring Malaysia.
In Singapore, government, community and business leaders often take the lead in serving the dish as part of official functions during the festive period or in private celebrity dinners. Some have even suggested that it be named a national dish. 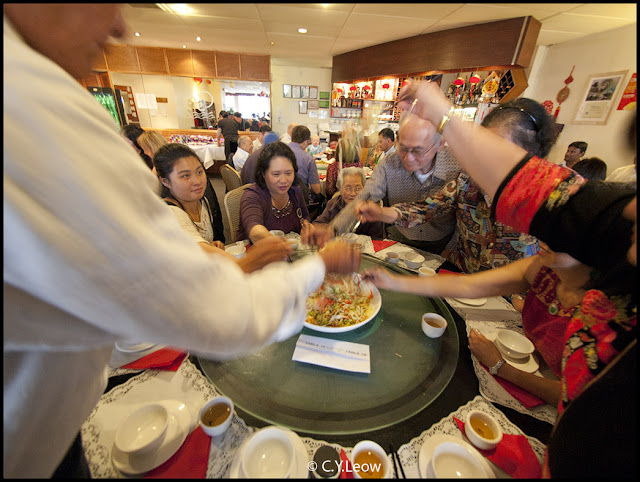 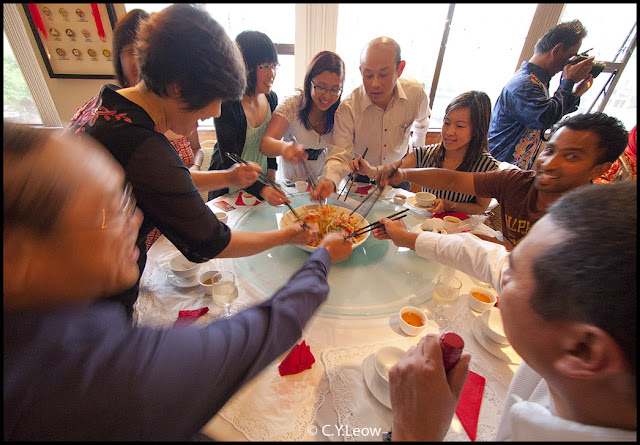 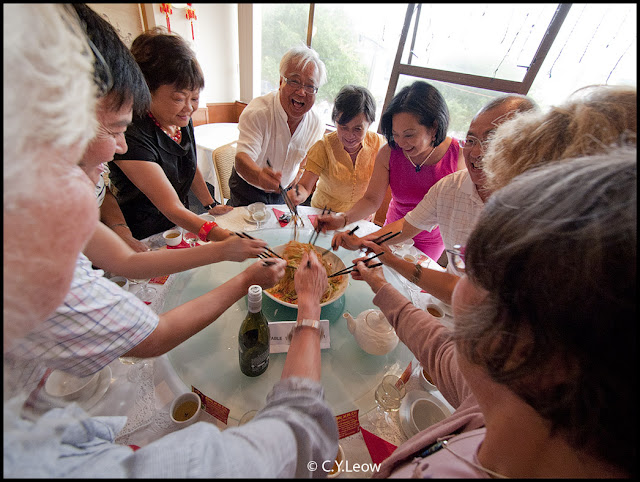 The rest of the dishes were nothing to shout about, it was nice to be able to taste a slice of the traditional Chinese New Year’s cake (nian gao 年糕). 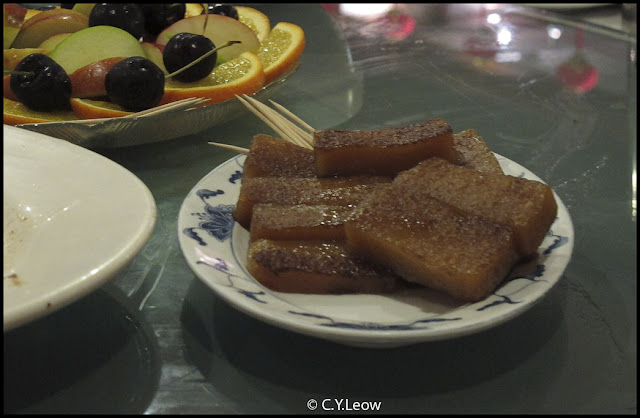 I was told by a committee member that this year, NZMS are not able to source a traditional lion dance to welcome CNY.

Out of desperation, J.C.Chin went and got a Mr. Huang; who is a regular Erhu busker at Lambton Quay!

I admire Chin's bravado, Mr. Huang did a great job with his "Chinese violin" or "Chinese two-string fiddle. He even played the NZ and China's national anthems on the ancient instrument! 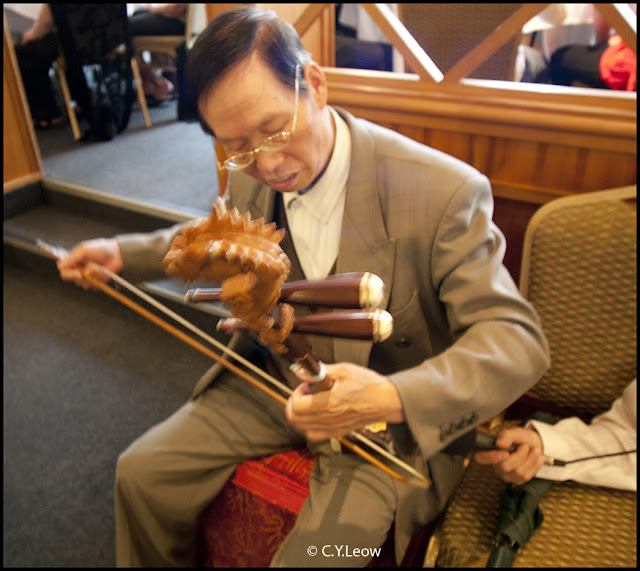 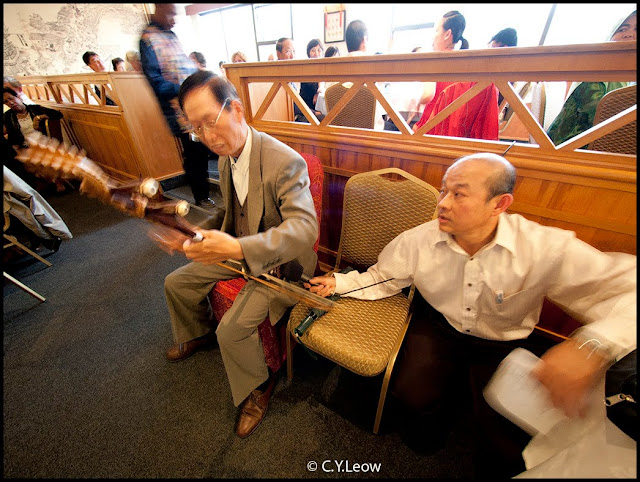 Chin holding the microphone for Huang.

Watch the video, notice something?

I hate to point out another bad Malaysian's behaviour, when Mr. Huang was playing the Erhu; half of the audiences were chatting noisily!

Have you guys noticed how quite and still your Kiwi guests and friends were?

That is known as "MANNER" and "POLITENESS", so even if you don't like listening to a thousand year old Erhu; I am sure, for the sake of good manner and respect for the musician, you can shut-up for a few minutes? DUH!!

Overall, it was an enjoyable dinner; catching up with seldom seen friends, priceless :)

Talking about price, there were a few rants about the $39 dinner charges was on the "steep" side.

Well, I can say to them; the ticket price, apart from paying to Regal for the dinner, have to subsidise for the lucky draws and performers as well. What little left over are treated as a fund for the Society.

I hate to be blunt, if you think it cost too much; you have a choice, don't go ;)

I like to say "well done!" to the organising committee, may be next year you guys can plan for a bigger venue, so more Malaysians can get together.

Most of the fancy dress pictures were shot with my Leica / E-P2. The Leica Summicron 90 mm f2 lens was mounted on the Olympus camera with an adaptor.

The dinner pictures were shot with the super-wide Panasonic LUMIX G VARIO 7-14 mm F4.0 ASPH lens on the E-P2.

Videos were shot with my favorite point & shoot, the Canon G12.

On Sunday, we were invited by the Poon Fah Association to a CNY pot luck lunch. More glorious food! 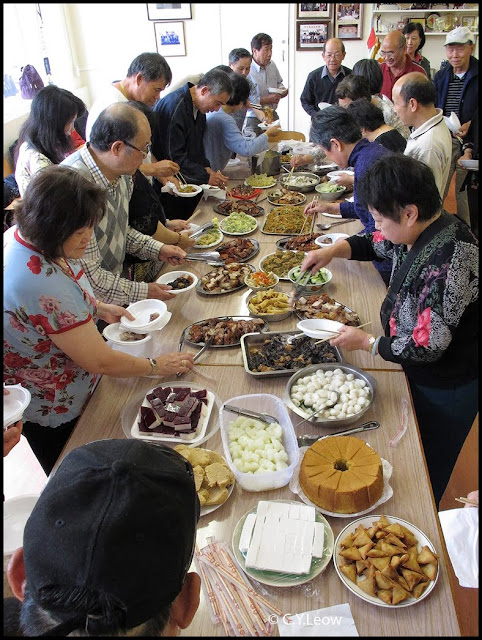 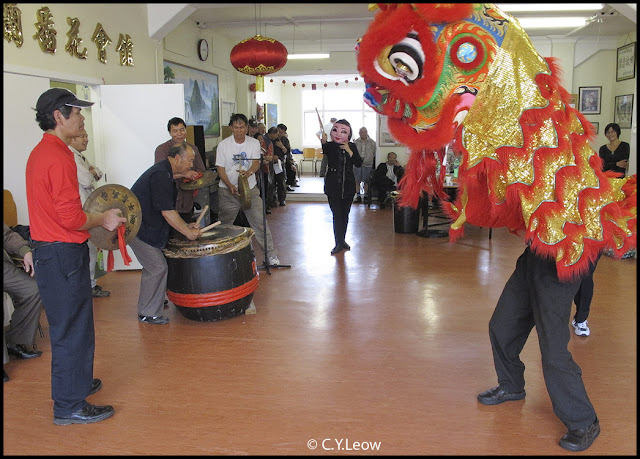 After lunch, the "big boys" play with their lion! Video after the picture!

It was a fun weekend!

A Happy Lunar New Year to You and Le General. Thank you for sharing the happenings at the NZMS.

Im Chris Francis, a Malaysian student studying and residing in Auckland.
I would like to find out where can i find Fish Essence(Pati Ikan Haruan)in New Zealand? i have been for the past 5 mths and im unable to find them here at all.
thanks
chris
(christo.shanker@gmail.com)
021 2508202