HOBBIT Farce @ The Middle of Middle-Earth

FARCE... Referring to something that isn't cool,
yet is hard to ignore! 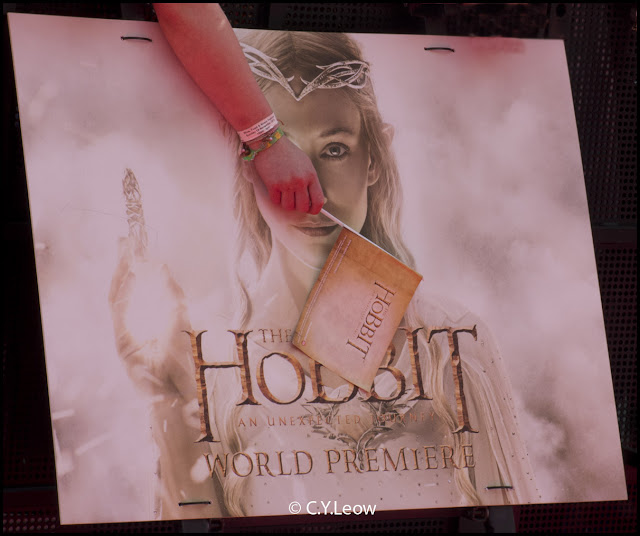 My friend asked me why I was not at the HOBBIT world premiere launch at Courternay Place, The Middle of Middle-Earth yesterday?

I WAS! Actually WE WERE!

Did we enjoy the launch?  NO! Was it entertaining? NO! NO! NO!

After attended the massive and very enjoyable LOTR Parade and gotten some really nice shots, I expected the HOBBIT launch will be just as exciting!

But I did not take into account a very important fact...

The LOTR Parade was held 1st December 2003, NINE years ago; I was much younger and much fitter!

This time round Le General joined me...

Just like nine years ago, we drove and park our car at Reading Courtenay without any drama; it was 1.30 pm.

We had lunch at the Reading food court and when we stepped out into Courtenay Place, we got a mild shock... the crowd! And it was only 2 pm and we were only able to stand second row, right outside Reading's entrance!

A Gen Y told us she and friends has been lining up since 9 am!  My goodness! 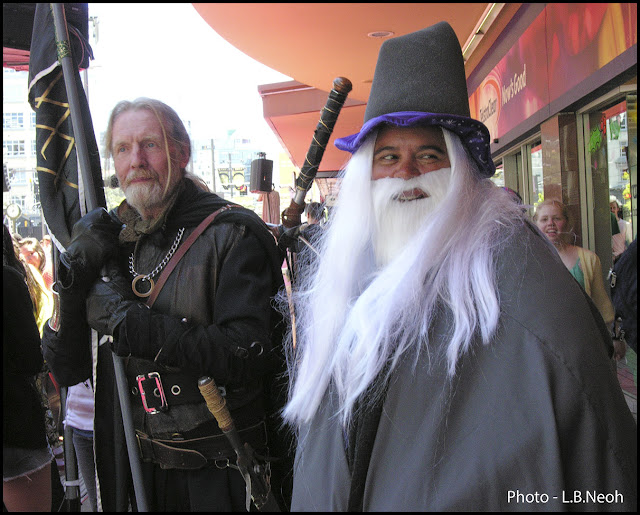 These were the only Hobbit "look alike" outside the Reading Courternay!  Scores of tourists posed photos with them.

Le General was using my Nikon Coolpix 8400, the neglected gem; she took the shot above.

Two hours into our standing under the HOT sun, my not so good right knee started to really stiffened up and hurt!  It was only 4 pm, another 90 minutes before we will see any celebrities!

My wife reckoned I am freaking mad to torture ourselves ;) 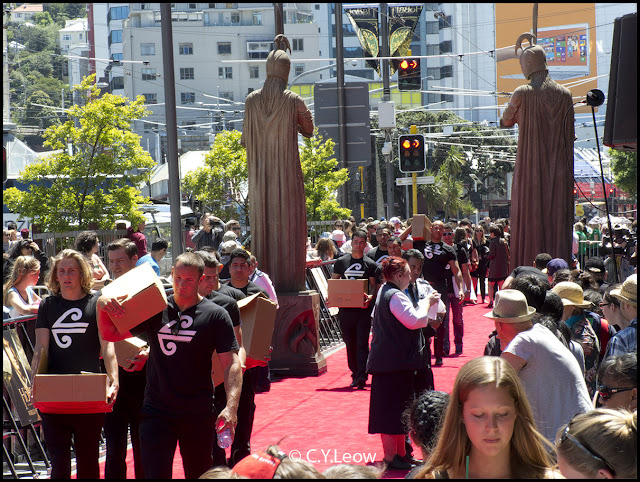 Air New Zealand staff brought in the "Free Gifts", everyone was expecting some goodies from the national airline and flag carrier of New Zealand who spent millions in Hobbit promotions! 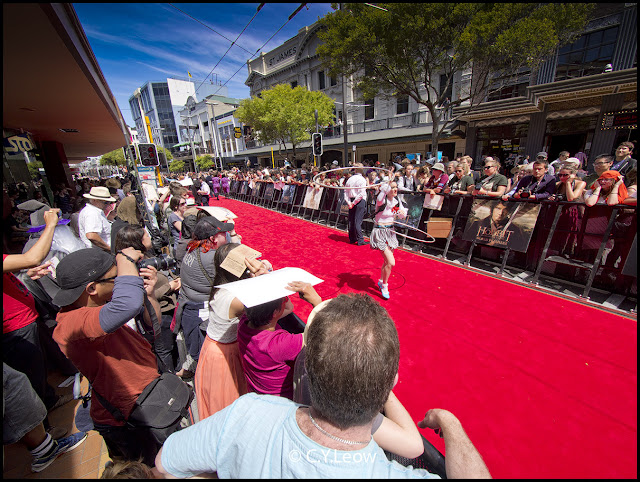 A big deal world premier launch and thousands of over heated fans (?) were entertained by a woman with hula hoops!  Come on Peter Jackson you can do better than that!

Were the over baked fans amused by her act? There were no happy faces ;) 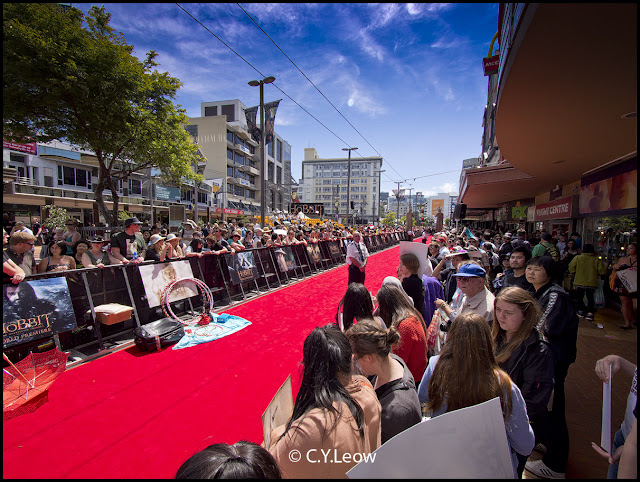 This is what it look like on our right, no; I do not have a ladder to get this shot... my little Nikon P7700 was mounted on my monopod, after triggering the 10 second self-time I raised the camera above my head to get this view! 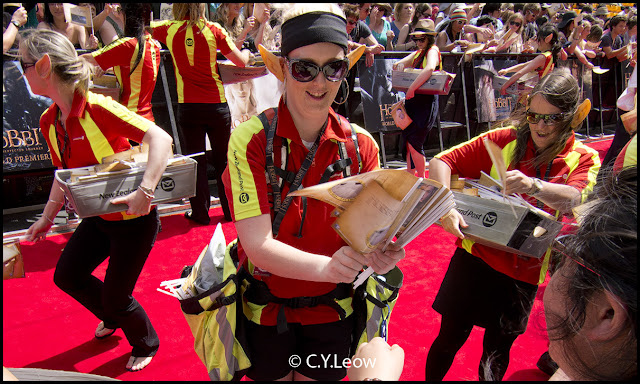 Air NZ lasses trying to look like Hobbits, giving out flags, cardboard flags? Why did anyone want these flags for?  Failed publicity! 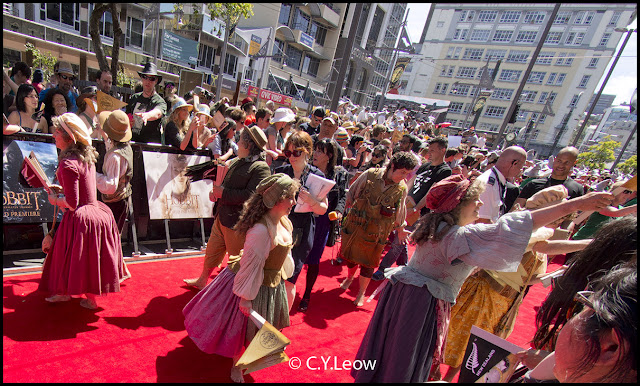 More Air NZ pretending to be Hobbits, giving out... NOT BLEEDING FLAGS again!! 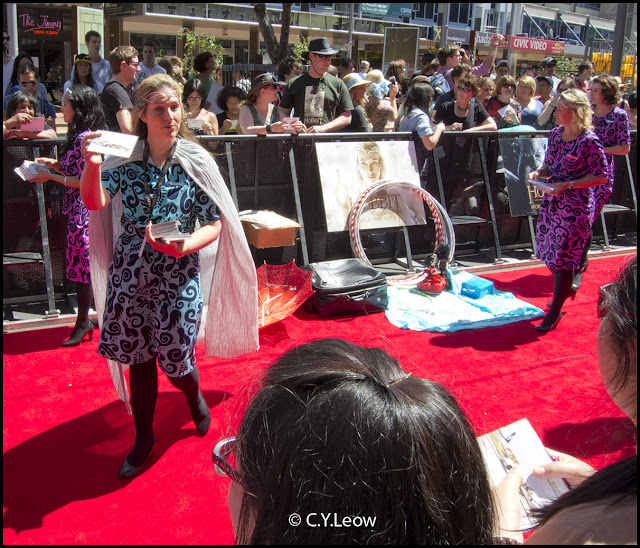 Post cards any one?  Air NZ you could have done better! DUH!!

For nearly an hour, various Air New Zealand staff; trying to look like Hobbits, dishing out "goodies" to mildly excited fans!  How many types of cardboard flags you like? Post cards with picture of their Hobbit plane?

Personally I think Air NZ has wasted $$$ on these "gifts", I saw hundreds of them thrown away in thrash cans all over the venue!

The airline could have giving out souvenirs that the 100,000 fans can use, like a cap?  What ever they gave out that day were used as sunshades and then thrashed!  Promotions WASTED!! 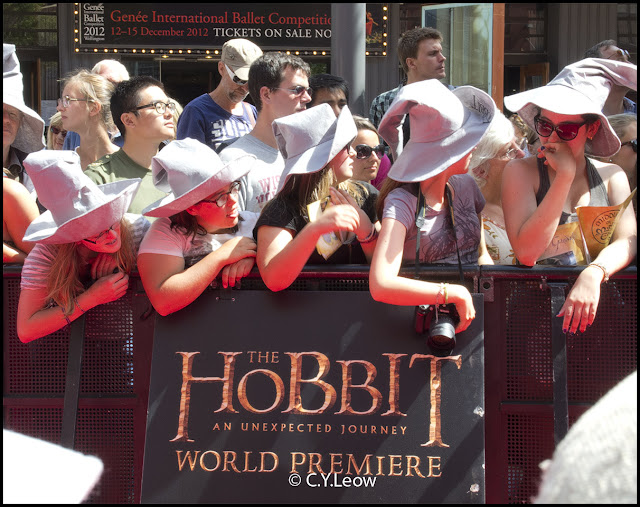 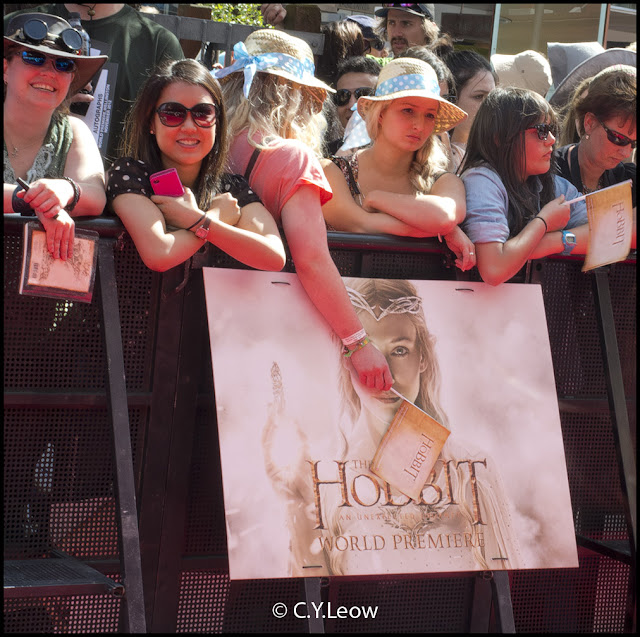 I find some of the fans more interesting than the celebrities who, still not to be seen; it was 4.45 pm! My legs were really killing me!  Think like a Ninja :)

It was nearly 6 pm before the celebrities appeared at our side of the red carpet! 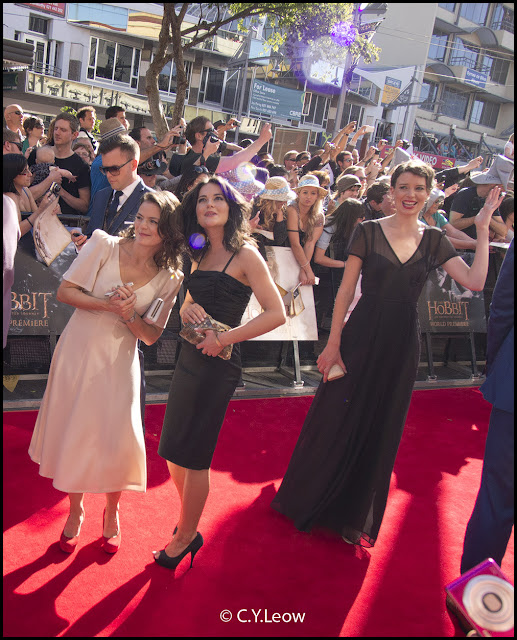 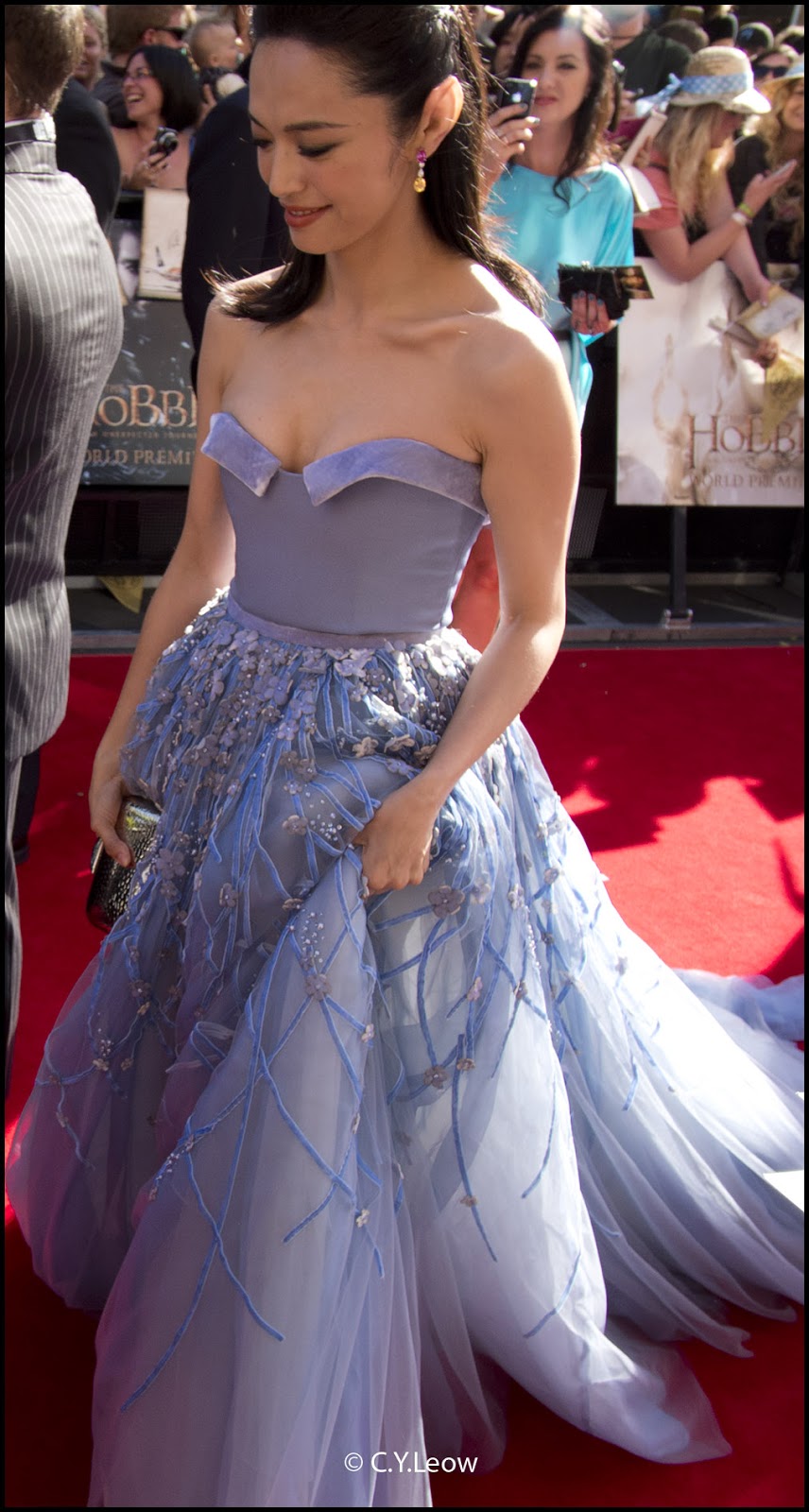 I don't know who they are, but they look absolutely stunning!  Good enough for my lenses ;) 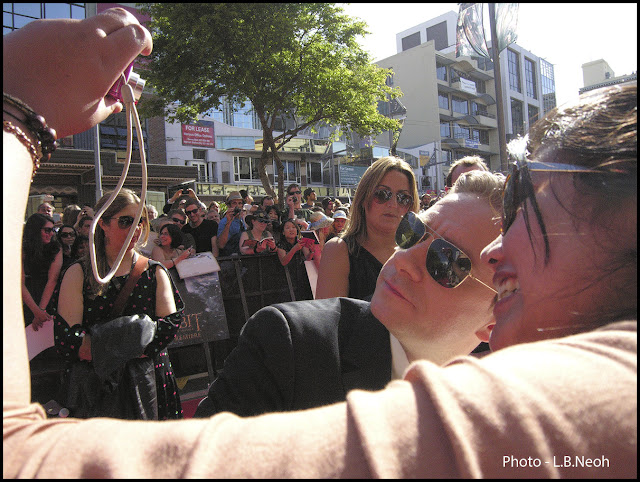 A ecstatic fan self post a picture with Martin Freeman, he has been cast in the lead role of Bilbo Baggins in Peter Jackson's three-part adaptation of The Hobbit
Le General was really quick to snap this perfect shot in front of her! 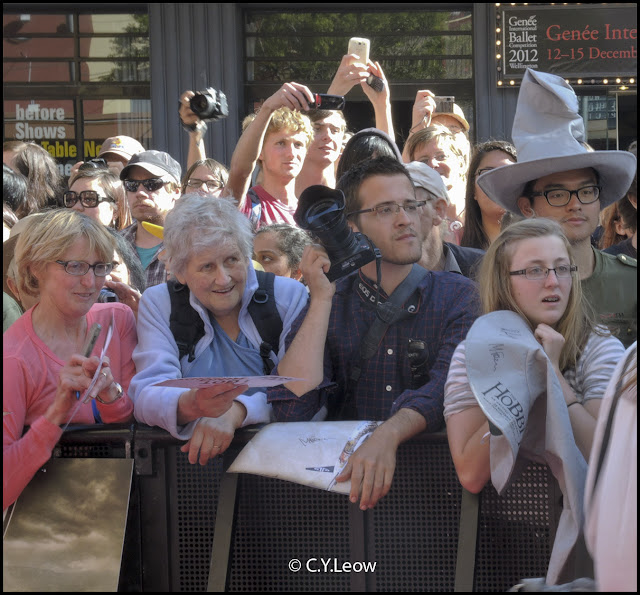 Others looking and admiring Martin Freeman, in awl! 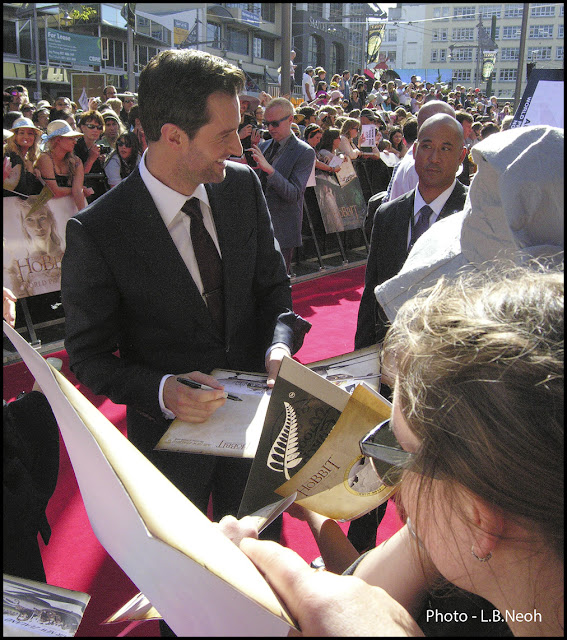 Richard Armitage who is really tall, pleases the crowd. He plays Thorin Oakenshield in the three-film adaptation of The Hobbit. A tall Hobbit? ;) 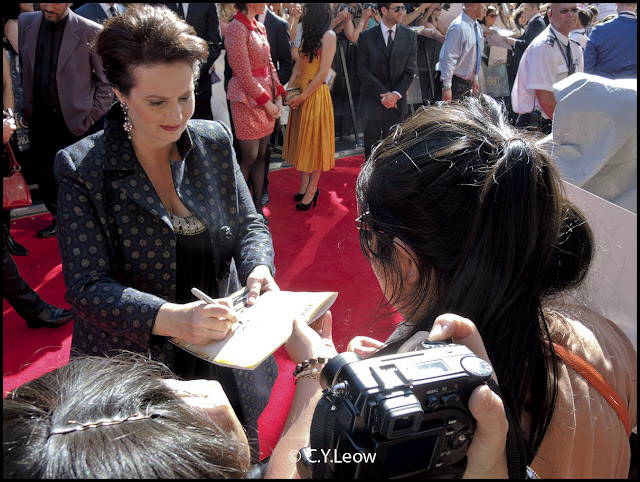 Philippa Boyens!! Famous New Zealand film writer and producer who co-wrote the screenplay for Peter Jackson's films The Lord of the Rings series, King Kong, The Lovely Bones, and the three-part film The Hobbit, all with Jackson and Fran Walsh.

Where was Peter Jackson?

well, he did not reached where we were standing but I managed to fire a few shots at his lovely daughter Katie... she was quite far away from my lens though. 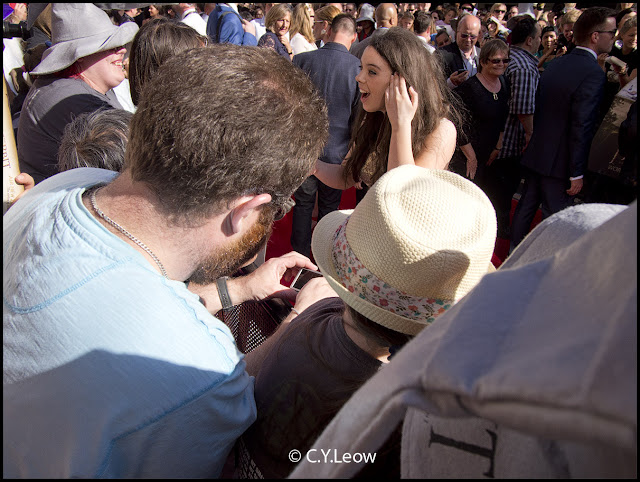 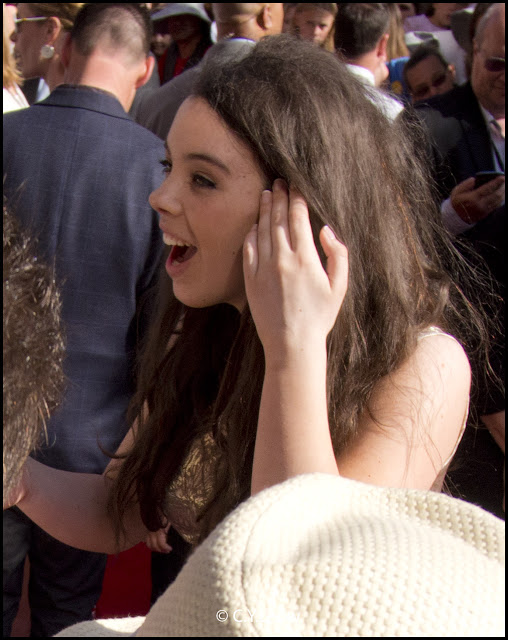 A crop from above, the Olympus OM-D did well!

Richard Taylor was the last celebrity we saw at our side, he was most patience in signing autographs for his fans!! 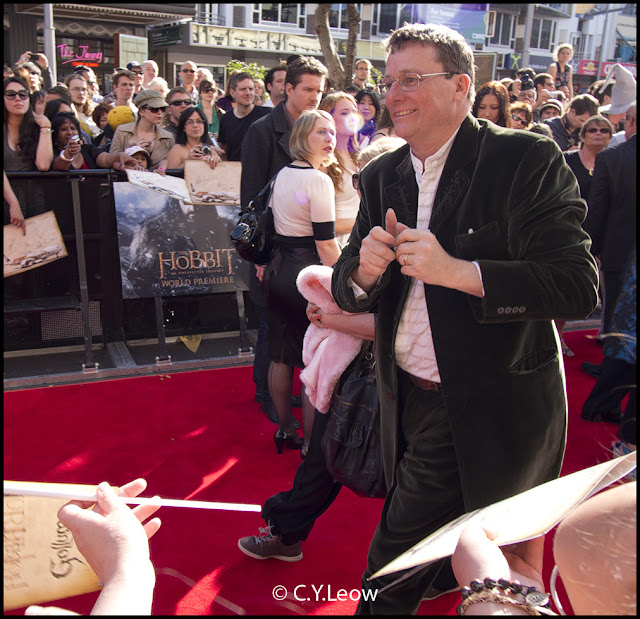 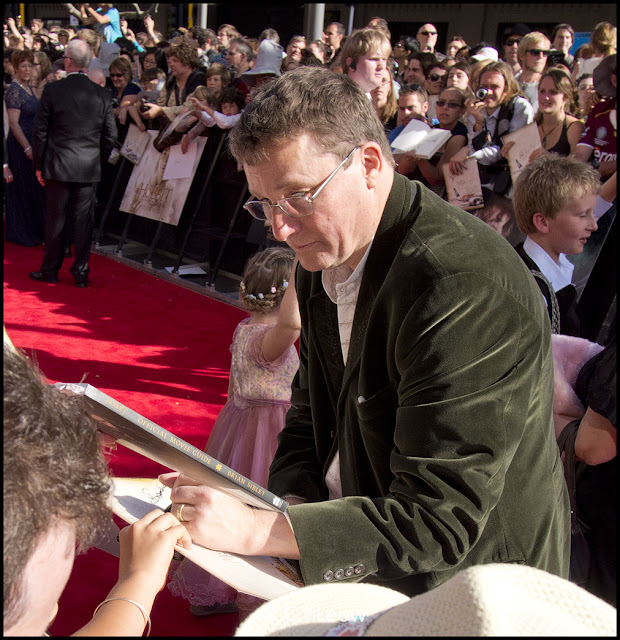 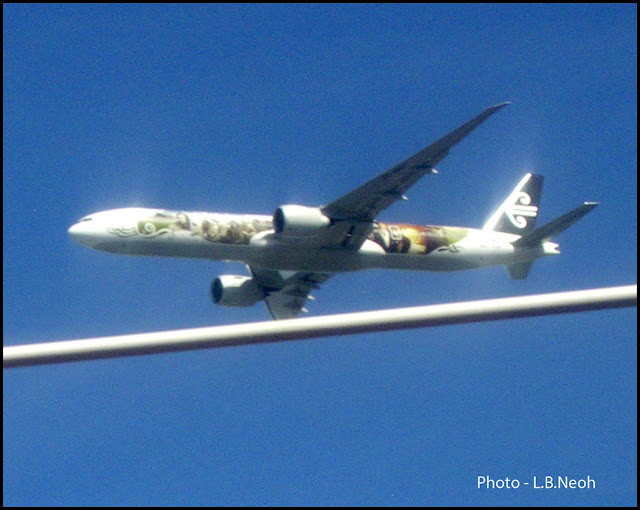 At 5.35 pm, the special Hobbit decorated Air NZ plane did a really low fly past above Courtney Place, Le General got the shot with the 8400 and I missed!

After seeing all the shots, may be... but like my wife said, we are NOT gonna attend the next one!

We were disappointed that Peter Jackson actually did a farce of a launch, after all it was suppose to be  a WORLD PREMIER!!  Yeah Right!!

Oh, Le General managed to catch a free Hobbit hat!! That is the type of gift fan and non fan want to keep! 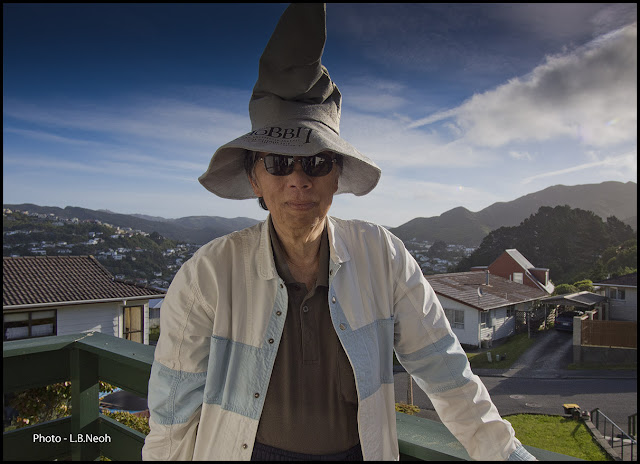 Yours truly at Karori, The Middle of Middle-Earth :)
Posted by cy.leow at 12:02 AM

Good to know you still have the urge for this type of event....hehehe

ha ha.. Like your hat!
Your photos are a photo essay telling a story without words. That`s how it should be.
" A picture is worth more than a thousand words"