My friend Jeff Ooi lamented in his Screenshots a few days ago:

"Come September 9 to the date, the late Penang-born journalist KS Choong will be remembered again for giving birth to The Star at Weld Quay, Penang; Malaysia 38 years ago.
Sadly, the People's Paper is now a Party's Paper."

From Weld Quay Penang to Pitt Street, to Jalan Travers KL then to Section 13 PJ and to Phileo Damansara... Happy anniversary!

But aren't we forgetting one person without whom there will be no "People's Paper"?

I am talking about K.S.Choong, the FOUNDER of The Star; do you think at the celebration tomorrow, any of the merry making Star people ever remember K.S.Choong?

When I "rejoin" The Star the third time round I noticed that all the Star people tend to behave he did not exist!


During one of the Editors Meeting, a smart alack Executive Editor even talk bad about him! That was one time I really lost my temper, because if not for Choong that SOB will not be what he is today, with company Volvo and tons of Star shares!

I told him that there is a Chinese proverb that says "when you drink the water, appreciate and be thankful of the liquid's origin"! it is sad how low a person can get!

Below is how I remember K.S.Choong, the founder of The Star.

It was April 1974, but it was like yesterday when I was called up by K.S.Choong to his office at Pitt Street; Penang, I was applying for a job as a news photographer.

To my total amazement, Choong flipped through my portfolio and said I will be the Photo Editor instead! I remembered my starting pay was RM300.00, it might sound very little to you now but photographers in 1973 was only getting RM60.00 a month!

When I told Choong that I do not have a 35mm camera, he called the accountant to his room and sold his personal Nikkormat and lenses to The Star for me to use! The other photographers were green with envy because everyone have to buy their own camera for work!

Called it "affinity", but some called it "favoritism", K.S. and me got along very well; he was a person that really appreciate good new pictures and if you get one, he will made sure it is play up well!

That was the ultimate motivation for photographers! I for one went all out to get the best shots and every time my shot appeared big, I get the "ultimate high"! 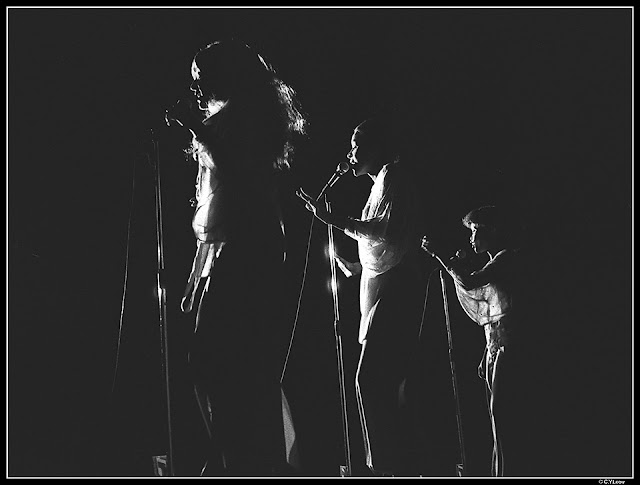 Since The Star was new, we have to fight against the "King" of paper, the New Straits Times and locally in Penang, The Straits Echo and all the other Chinese press.

But we were young and reckless, the Photo Editor himself went and covered 6 to 7 jobs a day!

Funny thing was, we REALLY ENJOYED it! Of course the ultimate thrill was to SCOOPED our rival paper, especially the NST!

Everyone of us slogged with the young paper because K.S. was slogging with us too!

He will not leave till the street edition were printed and the final been decided.

He was a PERFECTIONIST and he understand newspaper production from A to Z, you cannot bluff him on anything!

Oh how we learnt and how he shaped our character and professionalism! 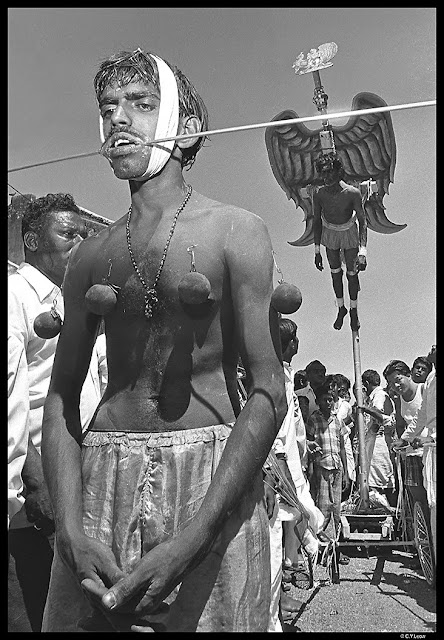 The "Bird Man" of Penang.

I remembered fondly that on Saturday, April 20, 1974; Choong asked me and rookie reporter Alex Choong (no relation) to go up to Penang Hill and find Tan Sri Omar Yoke Lin who is enjoying a quite honeymoon with his pretty bride, Dr.Aisyah S.P.Chan.

Choong told us it is an EXCLUSIVE and we got all excited!

I took my Nikon F2 which has an MD2 motor-drive attached, this is probably the FIRST motor drive that any Malaysian news photographer ever used!

I still remembered Choong was speechless when I asked him to authorise the payment of RM1,111.00 for the drive!

Yes, Choong knew that "breaking" technology IS EXPENSIVE and they don't grow on trees!

Don't forget that The Star was the FIRST paper to go offset and the first Malaysia paper to use computers! That is foresight for you!

Alex and me thought that the job was "a breeze"!

Not so! Because we DO NOT know where the loving couple are staying!

We spent hours up at Penang Hill searching and asking without luck, we came back in the afternoon and tell Choong the news and he told us in no uncertain term that "Do NOT come back if you can't find them!"

So up Penang Hill we went!

It was late afternoon when Alex and me tracked them to the government Rest House.

We waited outside, my F2 ready... as Tan Sri and his wife appeared, they were a bit surprise to see us... my F2 and drive went whirring.

Tan Sri was pointing at me and told his lovely wife, "It must be K.S.Choong!" 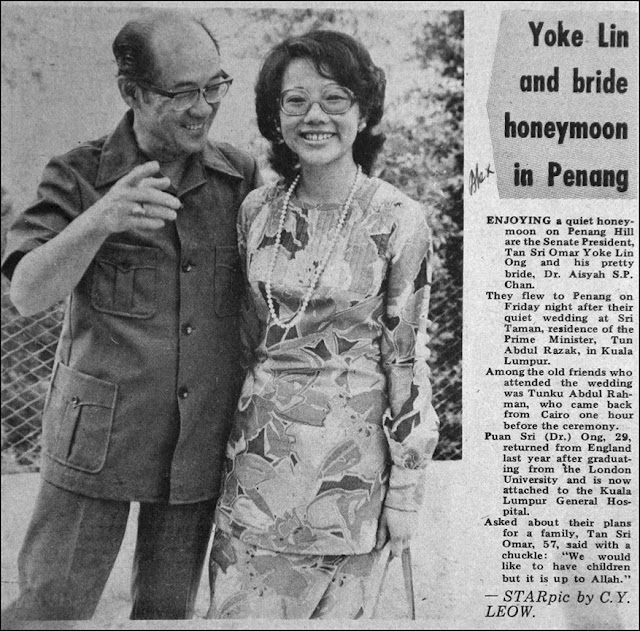 The picture made it to the FRONT of The Sunday Star the next day and of course EVERY OTHER papers KENA SCOOPED! :-)

Hardly a month later, in May 27 we came out with the FIRST colour front page!

Of course, nowaday; with computers and digital camera this is no big deal.

But in 1974 I was using Mamiya 120 colour transparencies and the Miss Penang contest finished at midnight... my slides have to be processed and colour separated ect ect... the pressure was incredible but we pulled it off! 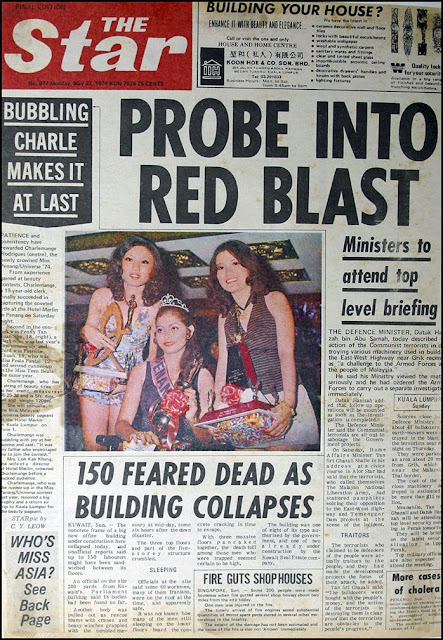 It was a historical event for us, but K.S.Choong gave me a free hand to plan all the work-flow!

That was his style, if he employed you as his Photo Editor he believe you are the BEST PERSON to do the job well, he NEVER interfere unnecessary; a far cry from the Editors in The Star today!

Thank you Mr K.S. Choong for your inspiration and guidance ! I only wish that the 38 year old "People's Paper" have some of your energy and vision! But then that was my wishful thinking....

Where would The Star be without you?

Respectfully, your "best cameraman" (quote and unquote).
Posted by cy.leow at 10:39 PM

Wow!Mr Choong sounds like a neat guy! thats the best kind of person to have as a boss, then the workers will all pull their weight and do their best.
The executive editors comments are just plain ignorant!If it wasn`t for the calibre or Mr Choong then this guy wouldn`t be where he is today!
i was intrigued by this bit you wrote.." That was one time I really lost my temple,"
Now...THAT would be a whole new blog entry!LOL.