Memories of 9/11 opened a flood gate... who was right, wrong; do not mean a hell lot to me. I am just a photographer and I cry for the thousands that perished in that senseless act!

I prefer to think of the GREAT time my family and I had in N.Y. and the World Trade Center.

It was 1994 when we visited the WTC, as can be seen from this shot taken by our eldest daughter May-N with a 35 mm Nikon AF compact. It was shot from Ellis Island which was a good place to capture the New York skyline with the two imposing twin towers. 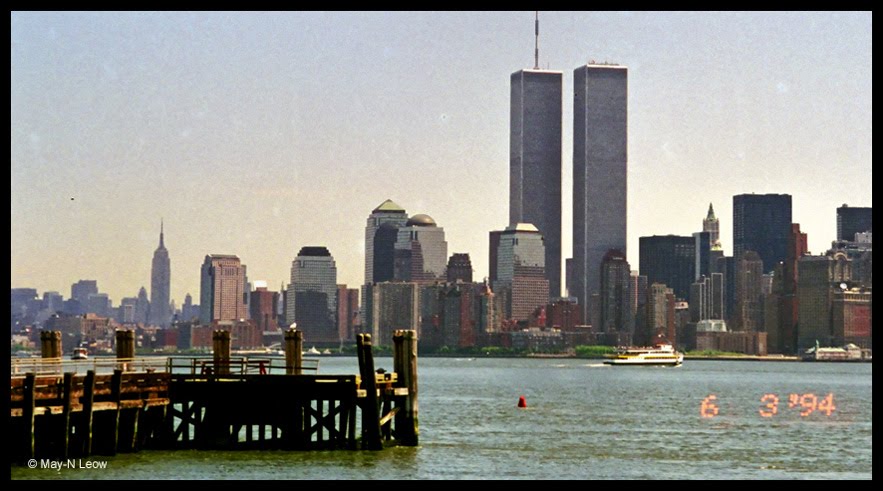 WTC were two very imposing building indeed, they were so huge and tall that when you were at ground zero it was downright impossible to take a full shot of the towers! Take a look at the shot below, it was shot with a 17 mm lens... the closeness of the two building will give any catastrophic nightmares! 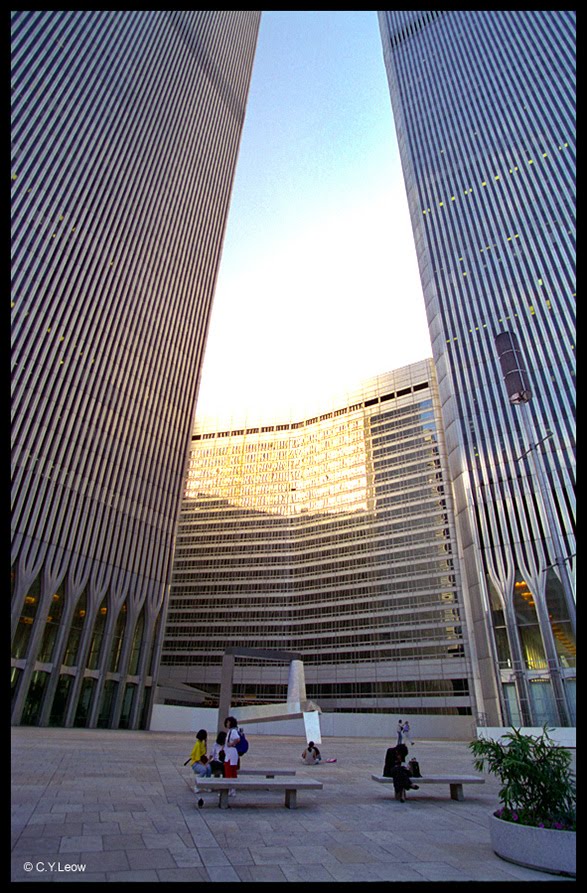 Standing directly under one of this monster and looking straight up at all those gleaming stainless steel pillars fading into the cloud gave you a real surreal feeling. I shot with the Canon 14 mm super-wide lens on a EOS 1 film camera. 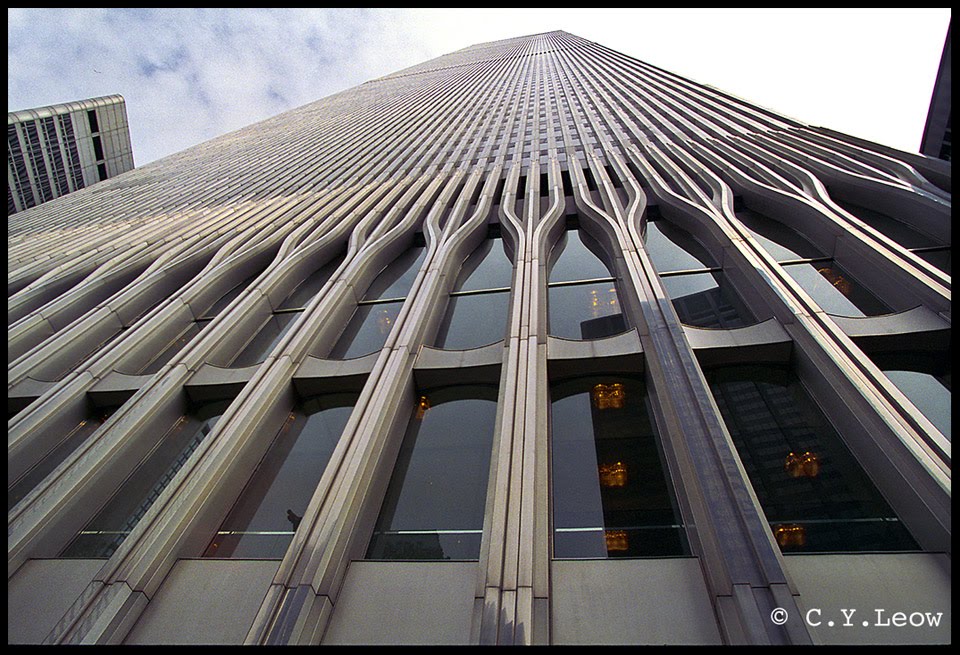 What a grand building it was! We were in awe when we were down at ground zero looking up. The stainless steel clad twin tower glittering in the afternoon sun. 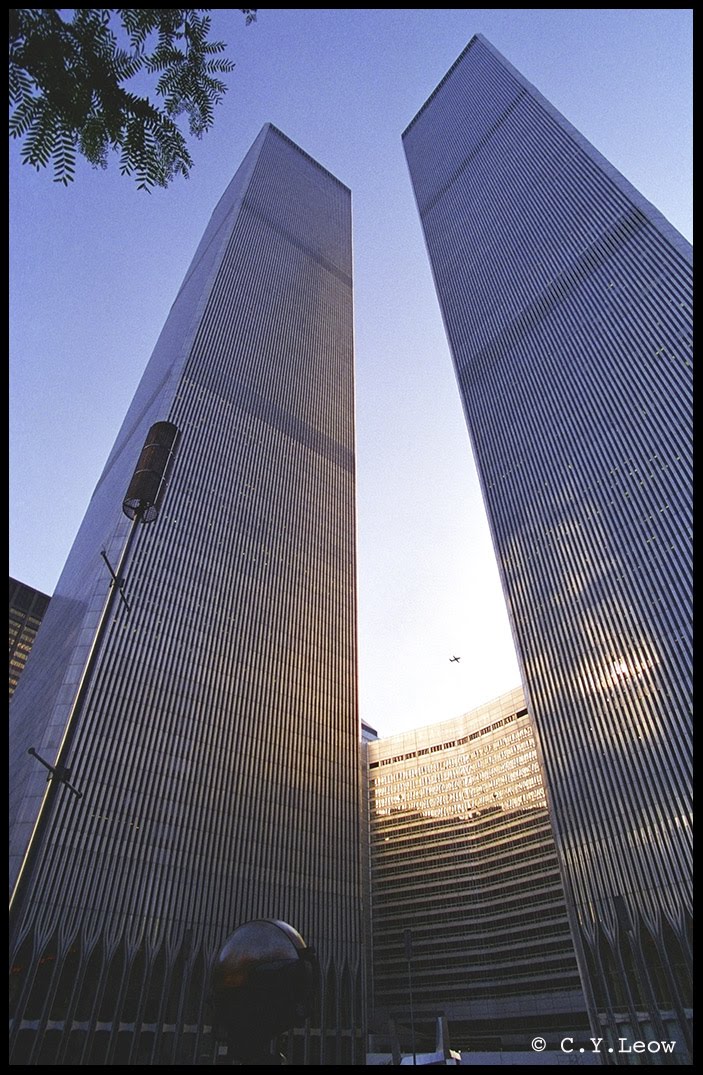 They were such a tall building! To get this shot I had to virtually lied on the cool granite floor and shot with a 14 mm ultra wide lens. See that plane at the rear of the tower? I was lucky to capture that! 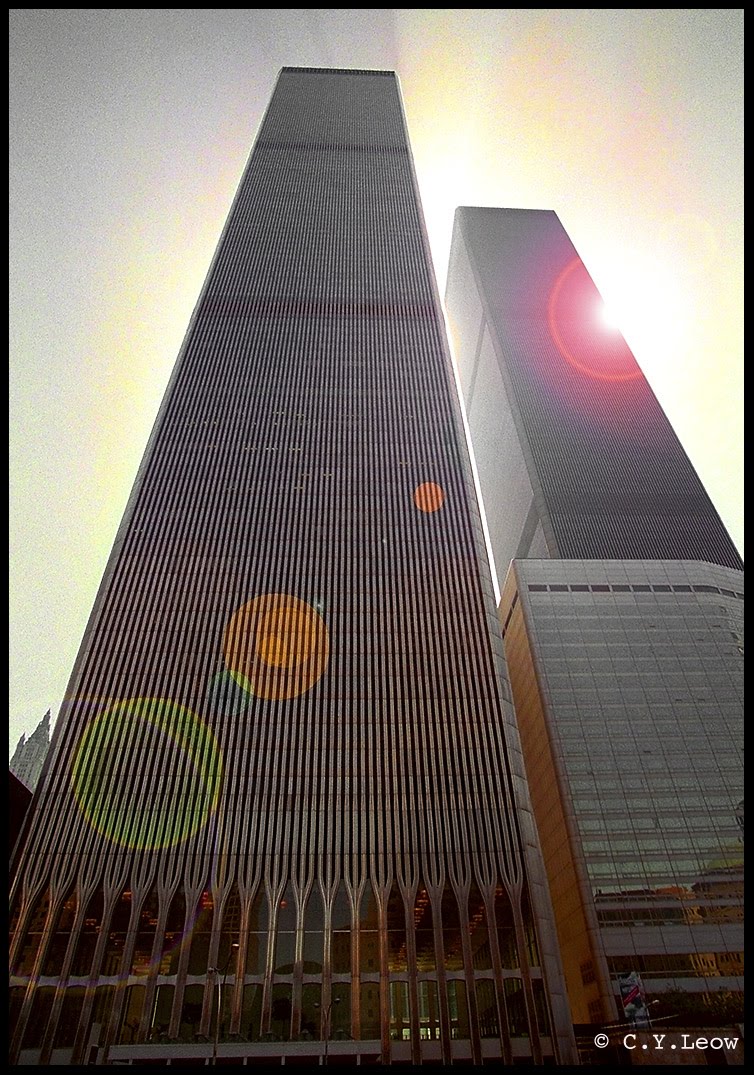 "THANK YOU... for not just posting an American flag with a "tribute" message on it. This photo is outstanding in many ways... photographically, historically, technically. I lived only 6 blocks north of the trade center towers many years before this crazy tragic event and, never had the opportunity to photograph as you did! Back then, I was only beginning my photographic interest and since the buildings were there every day, I really took them for granted. Anyway... excellent photo!!"

Niall, a photojournalist from Ireland comments:

"Wonderful stuff, Leow. I visited New York myself and didn't take as many pictures as I wanted.this is great. Its a pity no-one else will get to take it."

But the best view of the grand old city was actually on the top of the WTC! From there you can see the three bridges of New York.

The Williamsburg Bridge on the top left,the Manhattan Bridge and the beautiful wooden Brooklyn Bridge! 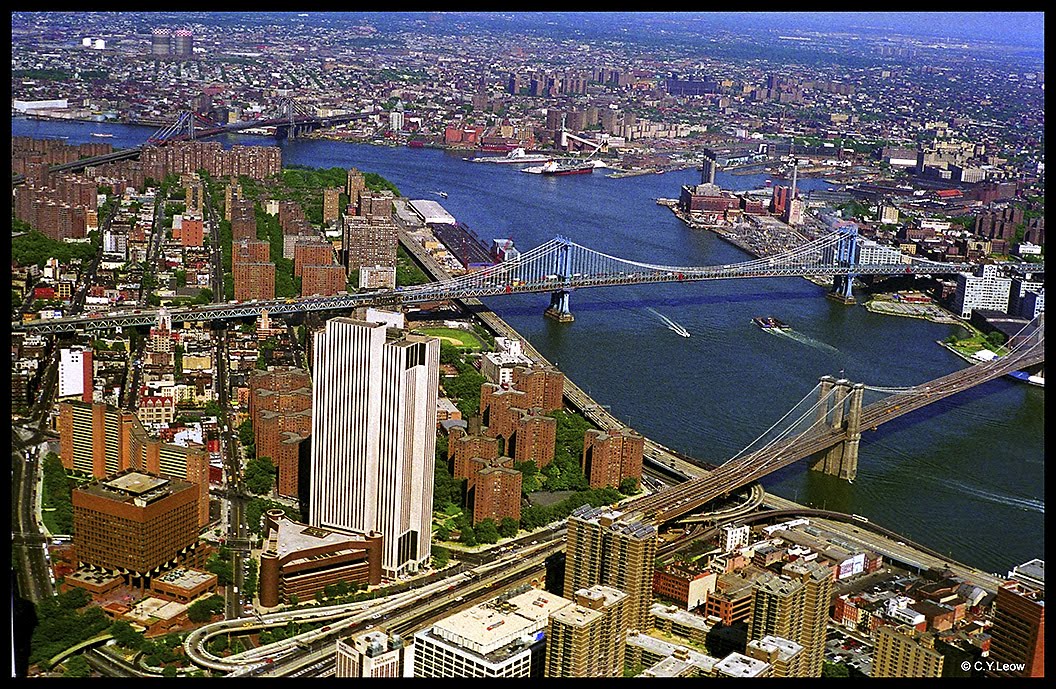 "Just as I too remember it and wish I had taken more pictures when I used to go up there years ago...I last went atop the WTC in the 80's...but visited it in 9/00..Thanks for sharing this shot...Great coloring and what a nice day that was!.:) Ave

I shot this picture with my Leica M6 and a 90 mm f2 Summicron lens.

Well, not from this view point any more :-( we had a great time at the WTC....thanks for the memory!!

Right up there on the top was the observation floor where you can see a 360 degree of New York! I shot my favorite shot of New York's THREE BRIDGES here.

While at the look-out floor I took some shots of the information plates on the wall, these plates explained how the Towers were constructed... take a look at this one! 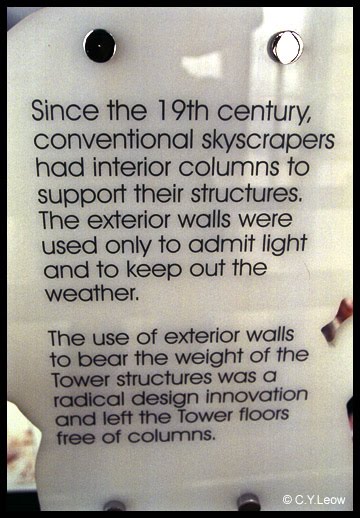 The second paragraph on that plate said the Tower structures was a radical and innovative design where the exterior walls was used to bear the weight of the Tower! Did that explain why it just crumpled when a floor was shattered by the jet?

Compared to another landmark of NY, the Empire State Building which was build the "old way" and suffered minimum damage when a B-25 bomber crashed into it in 1945! 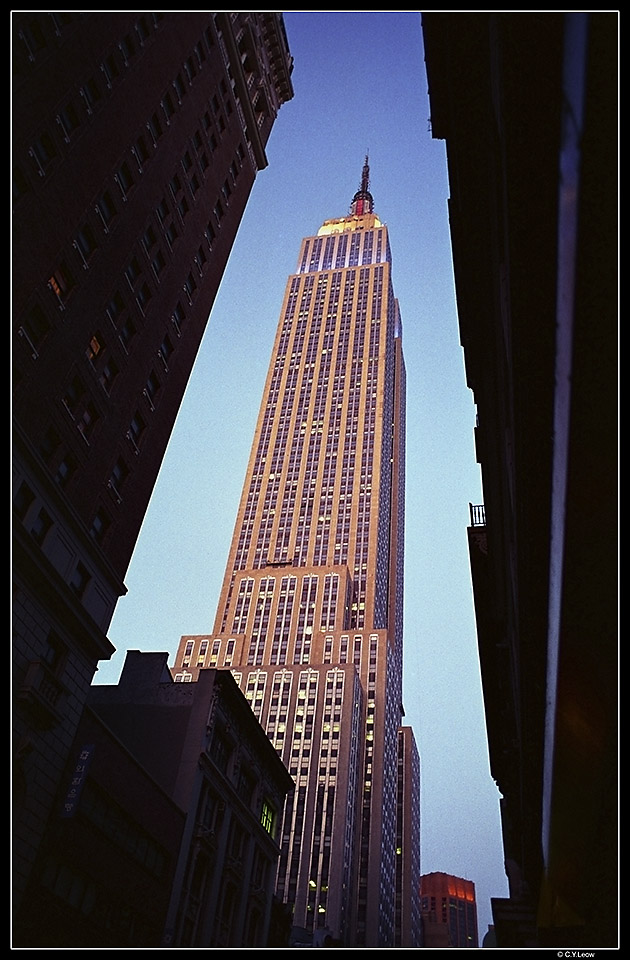 Finally, a one for the album shot of me and my family taken at the Ellis Island with the WTC behind. 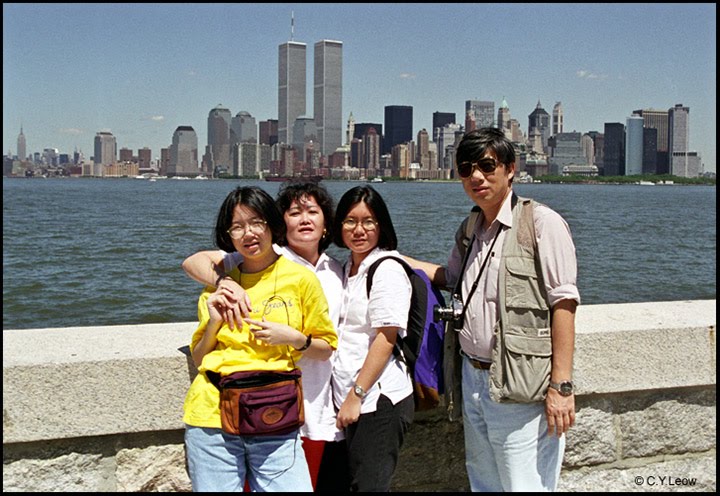 Adios and may all the lost souls rest in peace!

By the way, have you heard the song ""Where Were You (When The World Stopped Turning)" by Alan Jackson? Go listen... tell me if you have tears in your eyes the first time you hear it. And who said seasoned photographer not shed tears?

Email ThisBlogThis!Share to TwitterShare to FacebookShare to Pinterest
Labels: Déjà vu, Me

Photographs are all that is left to remember by.

Ive never seen such tall buildings, having never been in a big city like New-York(or any big city). I always wanted to go there and see it for myself. These photos are indeed a fitting memorial for lives lost.They will be part of the patchwork of history that is the Twin Towers...sad,poignant but also testifying to the indomitability of the human spirit.I always thought that a skyline bristling with skyscrapers was an ugly skyline, but nothing in these photos say that.