In my post on my G12 with the Nikon WC-E75 I raved how good this set up is! As good as it is; can it ever come near to the quality of my favorite ultra-wide zoom, the incredible Lumix 7-14?

Time for a face-off!

I packed the two cameras with their test lenses and head for our Civic Square in town. 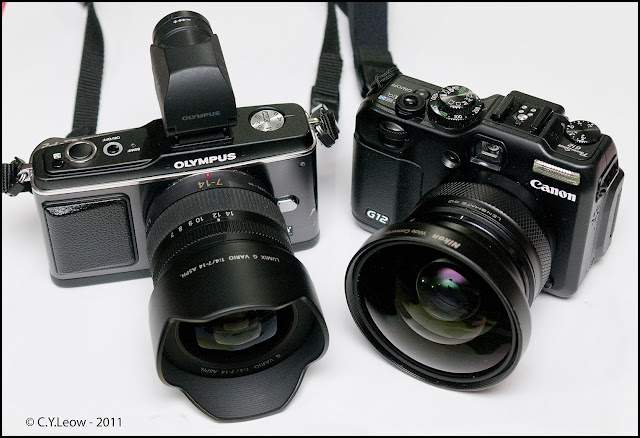 Took me twenty minutes of city strolling in my VRX Sportback to find a park near our Central Library. Yippee :)

A quick glance at my GMT-Master tell me that I have an hour of free time before picking up Le General, not a lot of time for a lens test but I came prepared ;)

Since I have preset both of my test cameras in their aperture priority (A) mode, I am able to shoot both lens at f5.6 and because I was prepared; I was able to start shooting immediately after I parked! 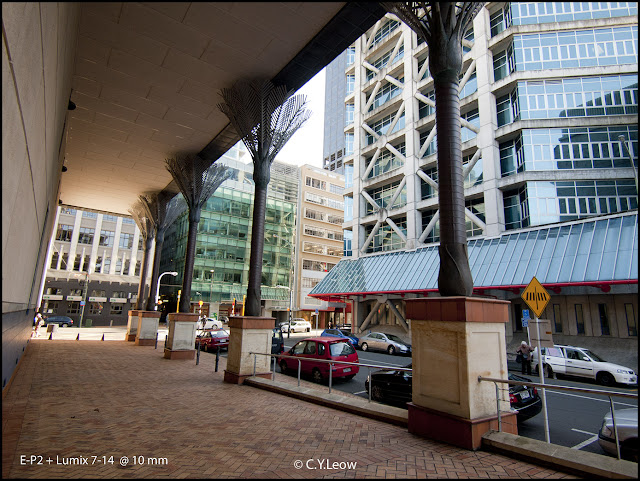 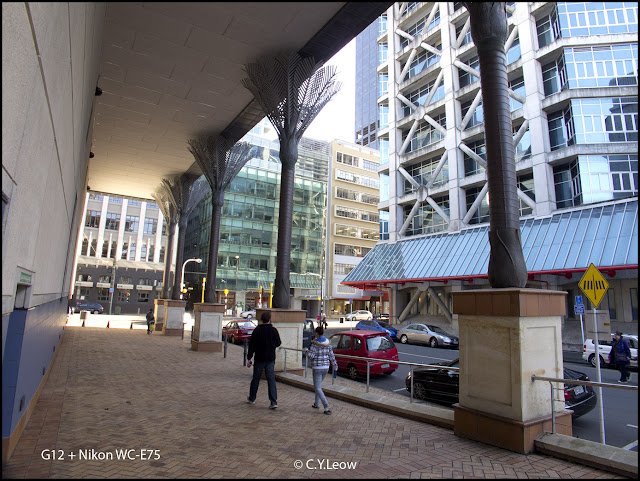 I try my best to adjust the 7-14 zoom to match the coverage of the WC-E75, at 10mm setting; in theory it should match, not quite but close ;) 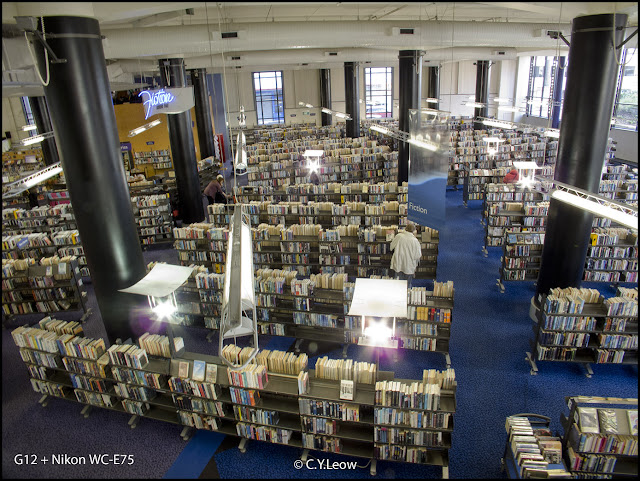 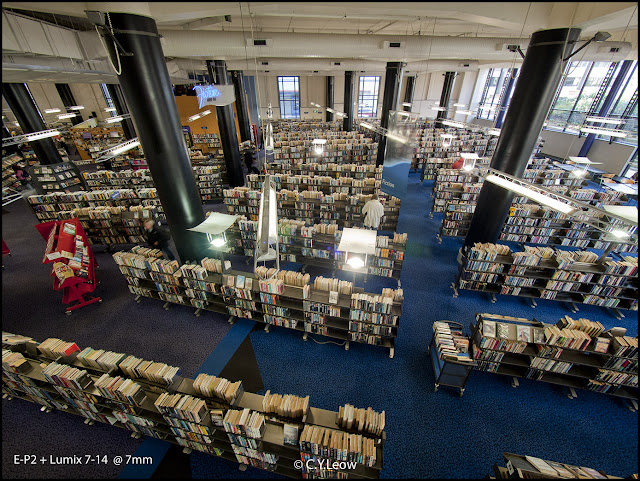 These were shot from the first floor of the library, in these instances the E-P2 was zoom out to 7 mm; see how much wider it is!

I also discovered later, looking at the images; that the E-P2 shots were much sharper in these low light situation.

I might be wrong but I think the rather heavy WC-E75 made the G-12 anti shake mechanism less effective. 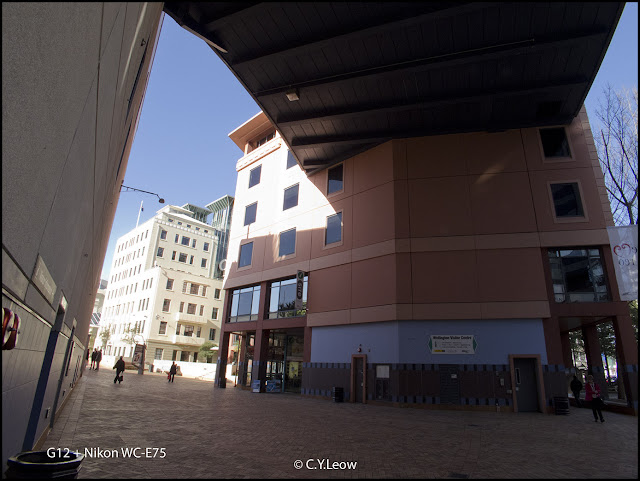 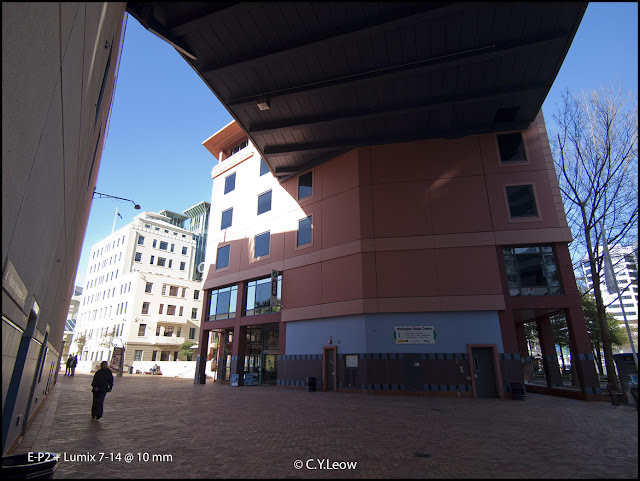 You can see from these shots that both cameras rendered strong highlight and shadow well. 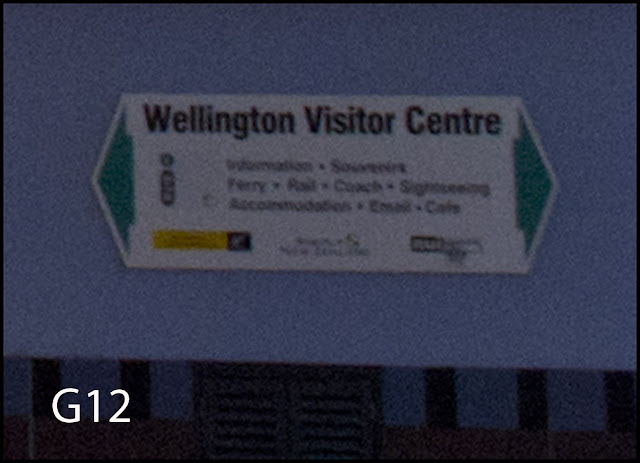 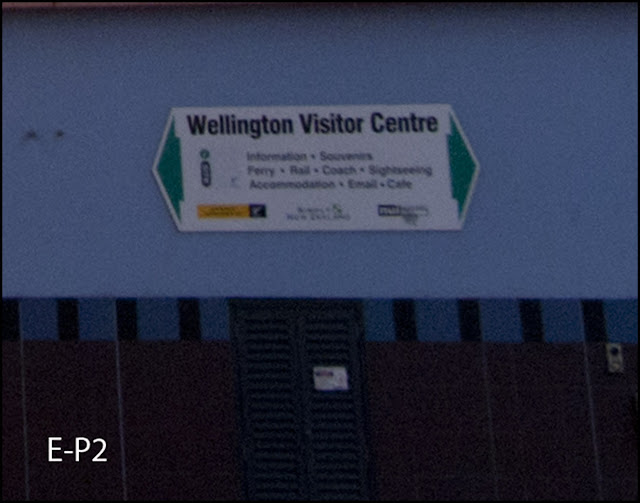 Cropping into the Wellington Visitor Centre signs on both shots, I was pleasantly surprised how well the G12 sensor held it's detail; even though the E-P2 sensor is six times larger! The added on optics did not seems to soften it's resolution either! 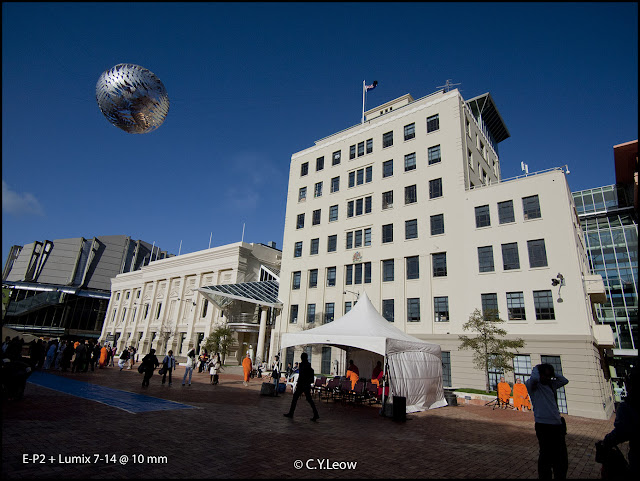 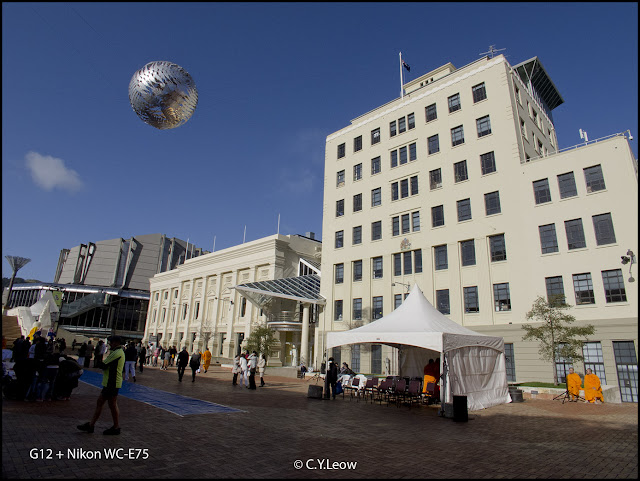 I have no idea why there are Thai monks at the square, since the square is used for public events; I suppose the monks are having a Buddhist function.

Notice the lack of barrel distortion in both lenses! 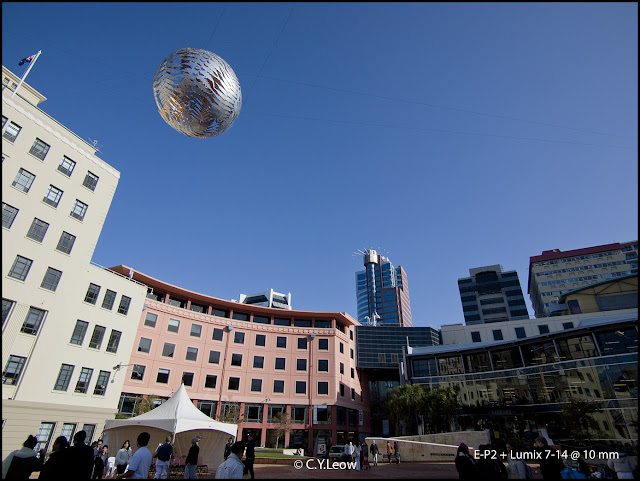 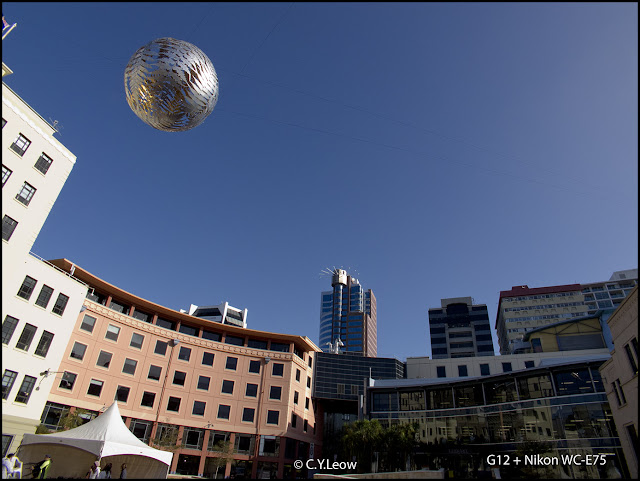 The Civic Square is surrounded by council buildings each with a distinctive architectural style: the town hall and council offices, the Michael Fowler Centre, the central library, the City-to-Sea bridge which Capital E is part of is home to the National Theatre for Children and creative technology experiences, and the City Gallery.

The main tiled area is the roof to the underground library car park. 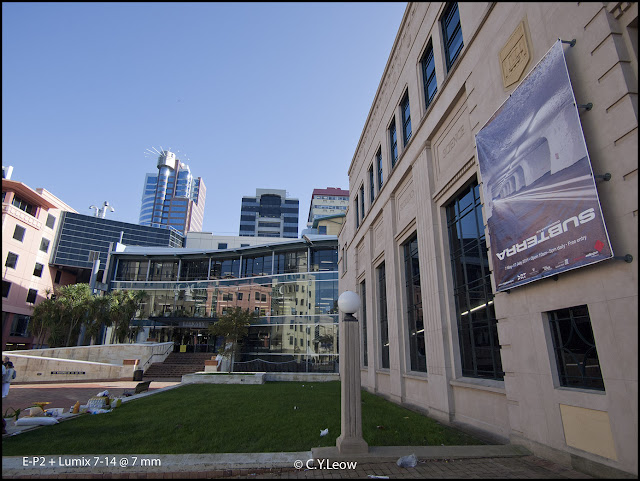 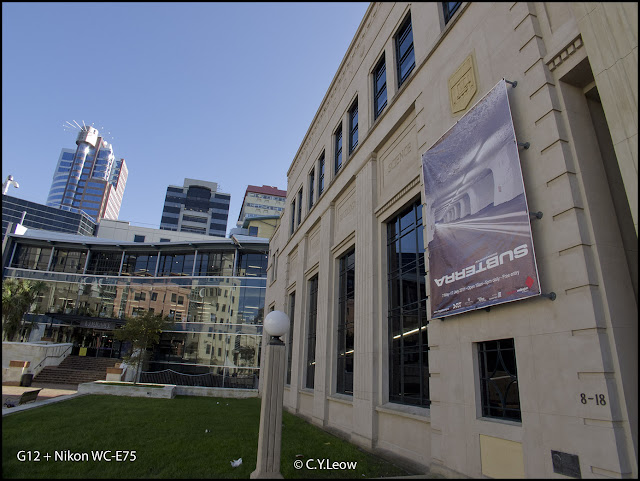 It is architectural shots like these that barrel distortion rear it's dirty head ;) It is especially noticeable with the WC-E75 equipped G-12!

Luckily, a dose of PTLens clear most of the distortion. 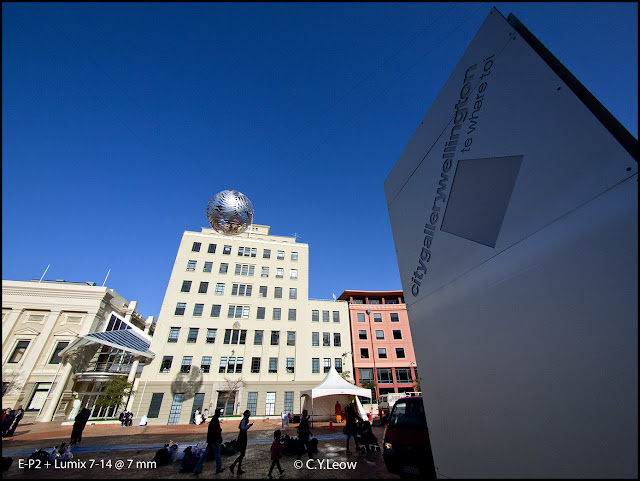 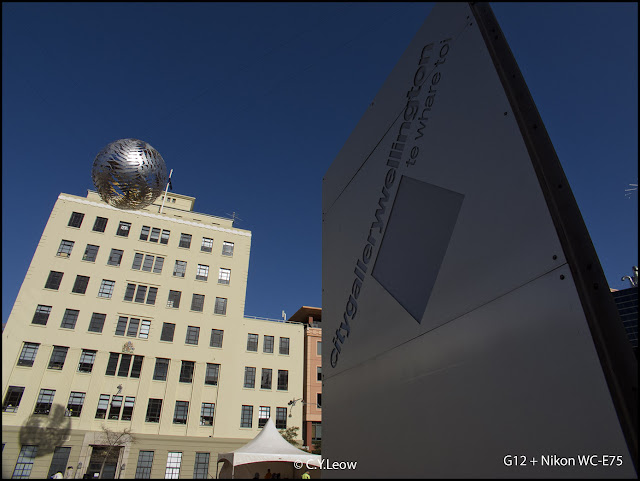 After scrutinizing all the images, it is clear that the Lumix 7-14 is better (within the same focal length) than the add-on WC-E75.

At a whopping NZ $2,120.00 the Panasonic LUMIX G VARIO 7-14 mm F4.0 ASPH is still the BEST ultra-wide zoom for traveling and architecture shots, bar none!

Here are another three expansive wide shots taken around the Wellington Civic Central with this incredible lens. 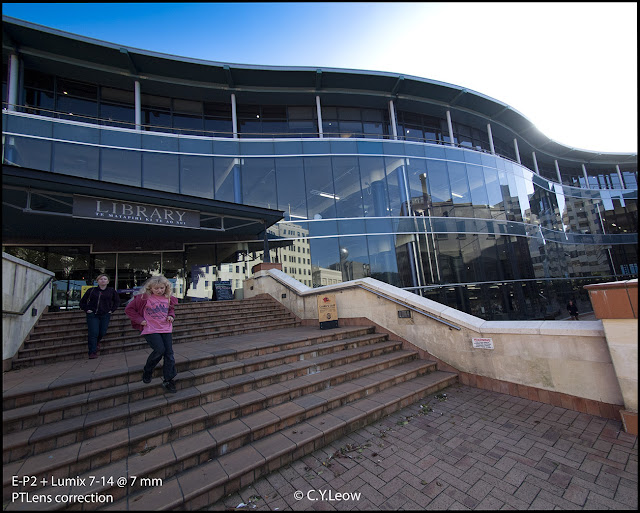 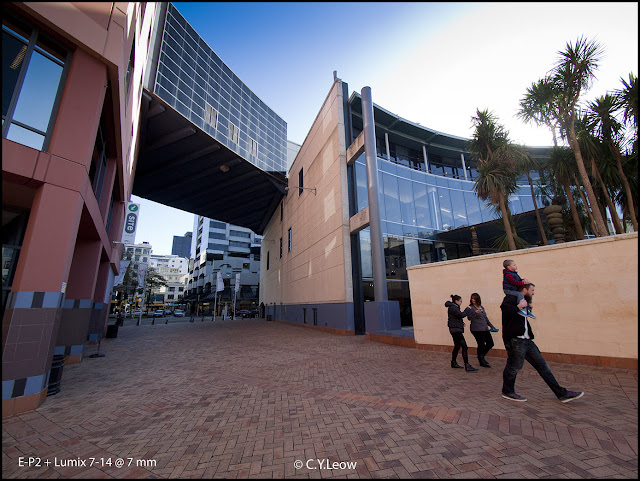 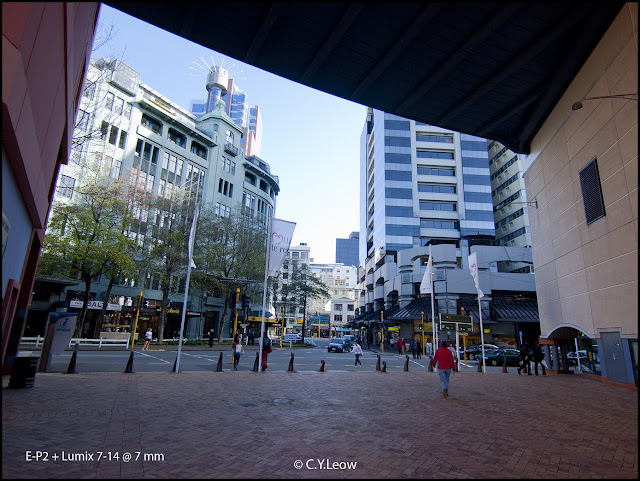 If you are traveling and happen to stop over Singapore, you can pick up the Lumix 7-14 at 50% less than what you will pay in NZ!

Nice photos... interesting reading about the differences in cameras and lenses.t`s lucky that you got a fine day for it!