A couple of months ago I discovered this little Chinese restaurant in Petone, it was recommended by Michelle Zhang who is a part-timer at our office; we are glad we took her recommendation seriously!  Thank-you Michelle :)

Petone (Māori: Pito-one) is a major suburb of the city of Lower Hutt in New Zealand. It is located at the southern end of the narrow triangular plain of the Hutt River, on the northern shore of Wellington Harbour. The name, from the Māori Pito-one, means "end of the sand beach".  - Wikipedia

Mr Ji's Kitchen like all restaurants and cafes in Petone is situated along Jackson Street.

So on one Saturday afternoon late last year, Le General and I set off to taste-test this new found shop for lunch.

It took us two drive up and down Jackson Street to locate this "Kitchen", it is right up (if you are coming from town) the other end of Jackson, the shop front is not conspicuous; in some way situated at 285 Jackson have some advantage for diners, in the week-end the lower end of Jackson Street is painful to get a parking space! 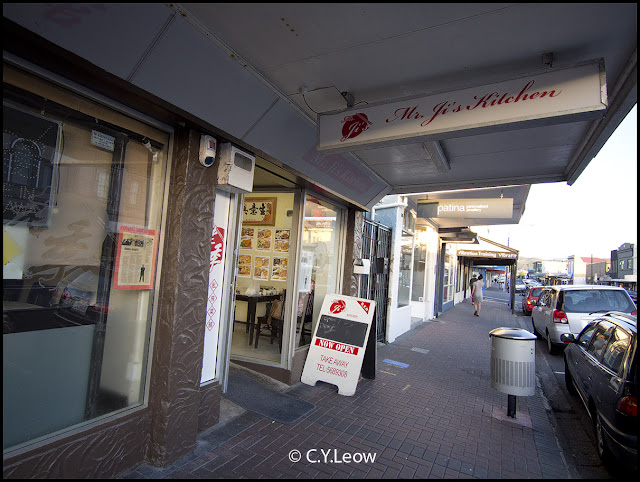 To tell you the truth, we were NOT impressed when we approached this new found restaurant! It look like any Chinese take away joint in New Zealand that serves "adulterated Chinese fares" enjoyed mainly by Kiwis ;) 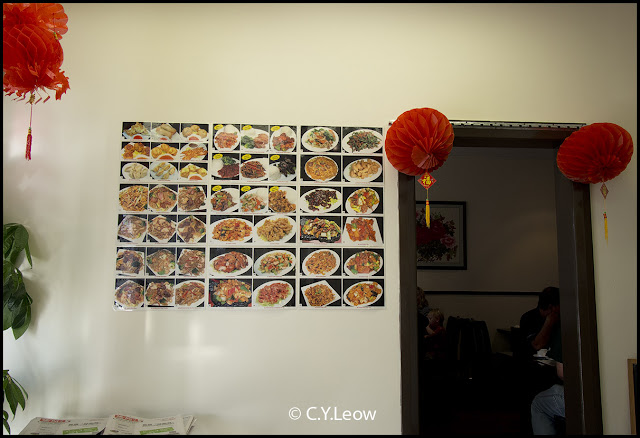 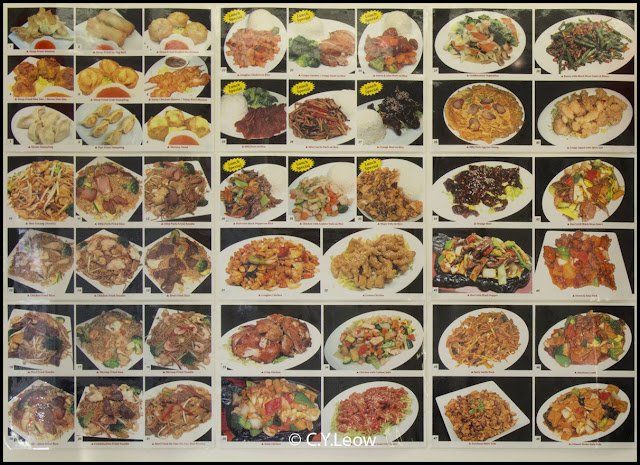 Entering the restaurant we were greeted by huge posters displaying pictures of take away dishes, our heart sank; this can't be good! But since we were there, anything once :)

We were shown to our table in the compact (small) dinning room, I notice a laminated newspaper clipping on one of the wall... 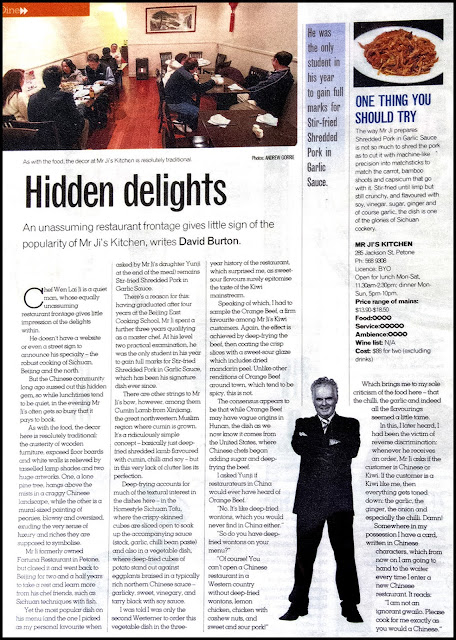 It is a clipping of a review written by David Burton and what a FIVE STARS review he gave to this little eatery!

Burton by the way is a very well known restaurant reviewer for the Wellington Dominion-Post newspaper.  Kiwis think he is like a food-review-demi-god, his reviews actually can MAKE or BREAK a restaurant bussiness!

Personally, I take his reviews on Chinese restaurants with a grain of salt; I rather trust my Asian taste buds ;)

On that fateful afternoon, I ordered Beef Brisket Noodle Soup and L.B. went for Shredded Pork with Garlic Sauce on rice.

Wow!  They were really good!

I love beef brisket, Mr Ji's managed to made the soup clear and not oily; the herbs was subtle, not over powering.  Best I ever tasted!

Le Gen's shredded pork, as it turn out; was David Burton's favorite!

While at the restaurant, we discovered Mr Ji's also serve Peking Duck!

I am a real sucker for Peking Duck, those that we tried in Wellington were so-so and we decided that we will come with our friends to savor this famous duck dish from Beijing that has been prepared since the imperial era, and is now considered a national dish of China!

Like all Peking Duck dish, you can have it in either one or three course. 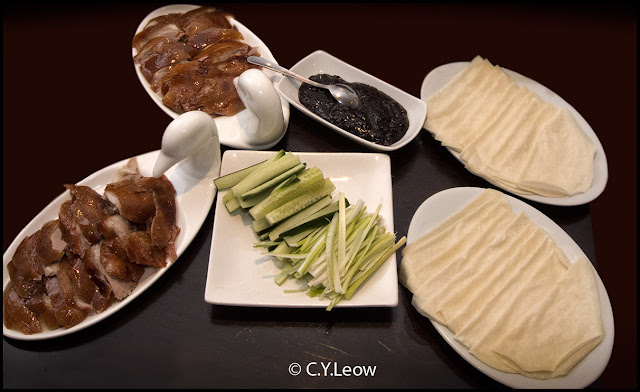 Peking Duck done as in the single course... we were there with our friends as two couple and the duck were served on two plates; very considerate of them! 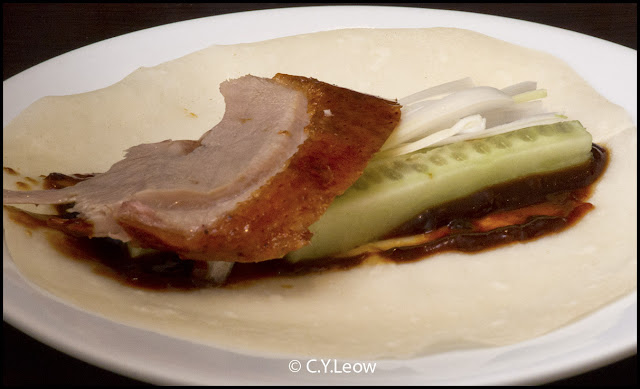 Proper way of enjoying Peking Duck is to apply sauce on a piece of pan cake, then place the thinly sliced succulent duck meat (with skin) with a strip of cucumber and scallion. Roll the content together for a juicy, flavorful bite!!

I was not disappointed, this is the BEST Peking Duck I tasted in Wellington! Le Gen and our friends agreed! 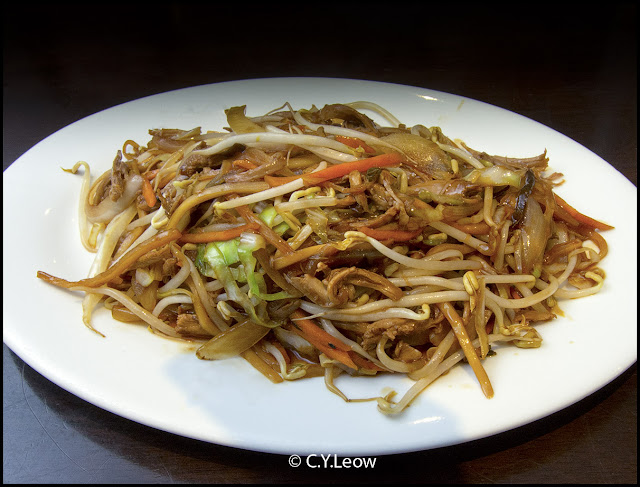 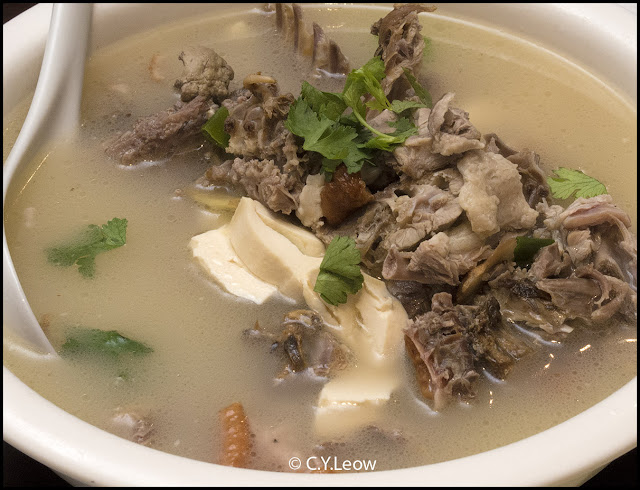 If you have your duck in two course, whatever off the bone duck meat is stir fried with bamboo shoot, bean sprouts and carrots for a delicious dish to accompany some cooked rice!

For your third course, the remaining duck bones are cooked as a mild favour soup with tofu. 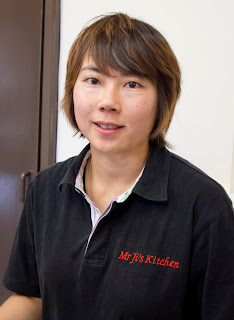 It was during this visit that I got to know Yun Ji, Mr. Ji's daughter.

Yun run the shop front in the evening, we find her service efficient and with a welcoming smile :)

It was during this visit that I express to Yun that I intent to blog about the dishes, she told me that they will be on holiday in Malaysia till early February; thus you only see my posting now.

Cut to the chase, here are the other dishes that we had tried and highly recommended by me, however; your taste might be different ;) 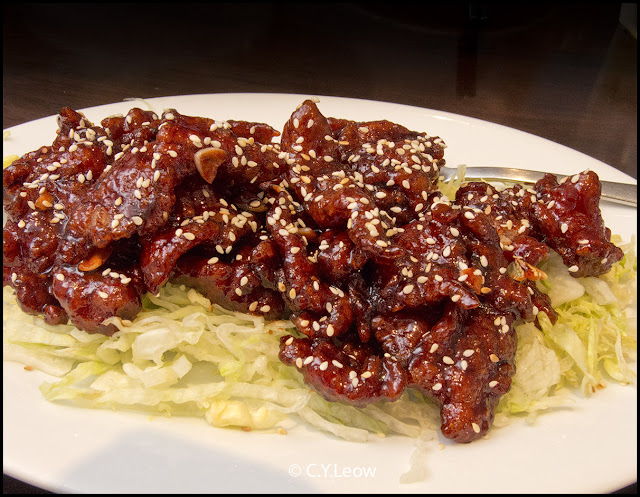 The very popular Kiwi delight, the classic Orange Beef which I do not fancy but surprisingly; this Mr Ji's version is actually very tasty, the sweetness and sourness are just right! 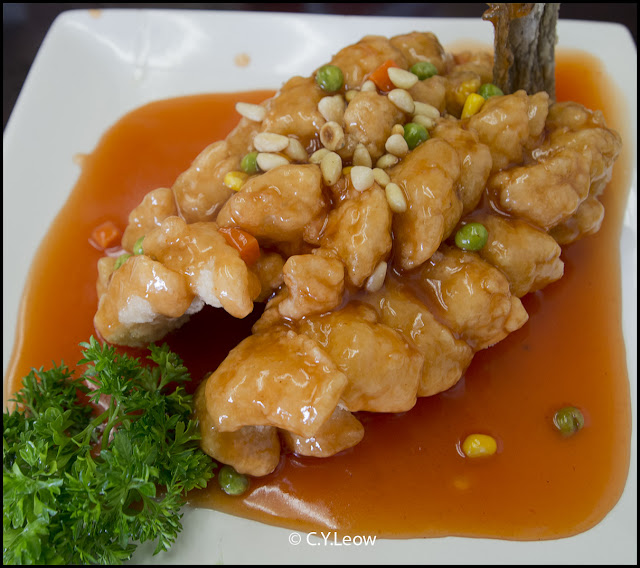 Boneless sweet and sour fish, another dish Kiwis will love...

Friday night, Chinese New Year Eve... three of us were at our favorite "Kitchen" for our CNY reunion dinner.

The little restaurant was packed... 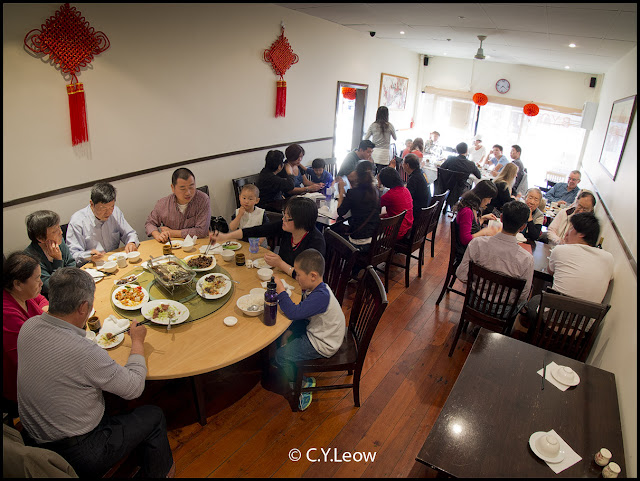 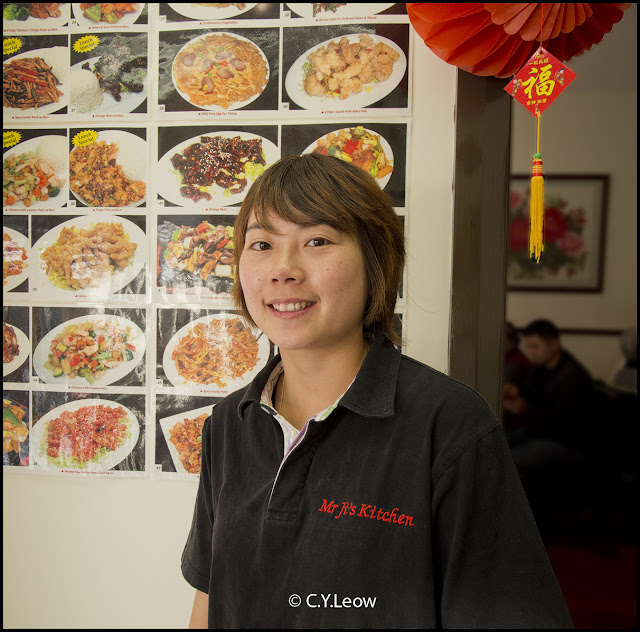 We welcome Yun back from her long R&D and she show us the slate  board with "special" for the night... 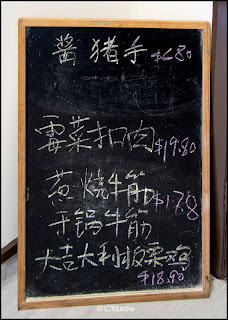 We decided on the following: 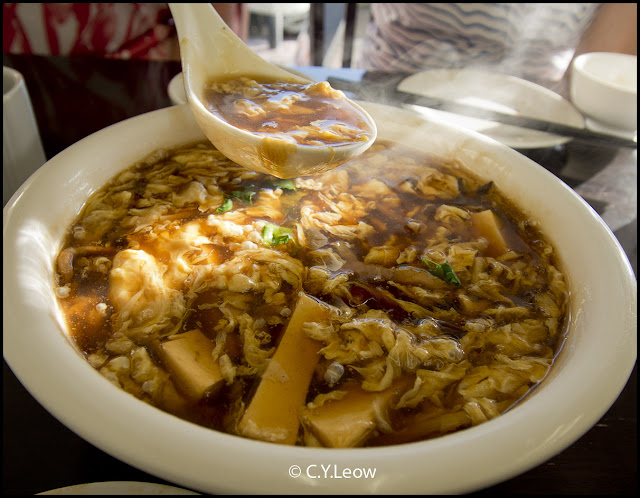 The classical Hot and Sour Soup, guaranteed to warm you up!  Mr Ji's version is not overly spicy to suite local taste buds. 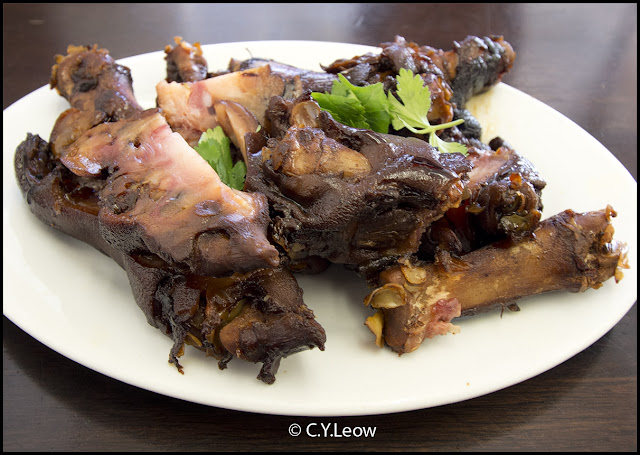 An acquired taste, the stewed pig trotter with black bean paste; a bit salty but it is really really tasty! At $6.80 per plate, I can have two ;) 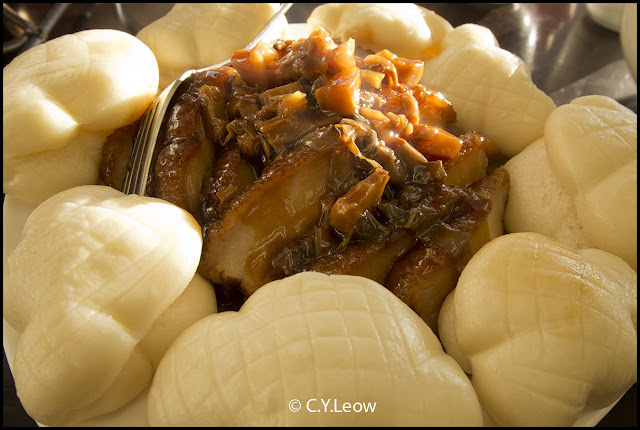 Mr Ji's come with dumplings which you sandwiched the fatty pork and vege.  Very delicious, but probably not for the health fanatics ;) 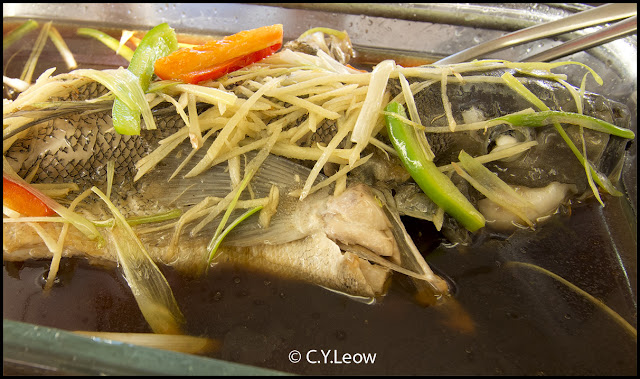 When my beloved father was in Wellington with mum, they tasted the New Zealand steamed BLUE COD; my dad said this was the best fish he ever ate! I wish they could have tasted this one, the fresh blue cod is steamed to perfection and literally swimming in a pool of tasty sauce! The juice go well with our rice :) 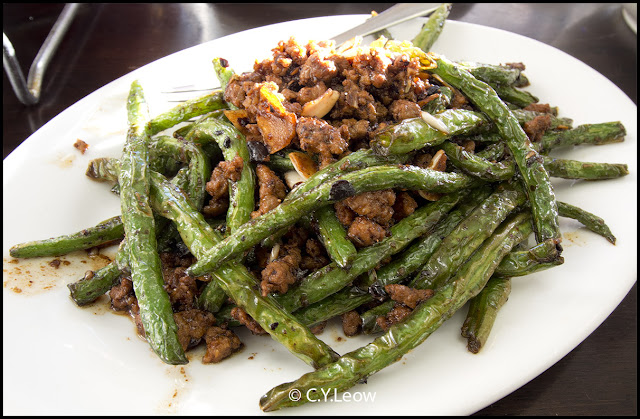 Gan Bian Si Ji Dou (Dry fried four season bean), 干煸四季豆; our favorite vegetable dish! The dish may look simple but there are key steps to getting that "wrinkled" crunchy look on the beans in this dish!

Phew!  That's that... this has been a LONG review and all the writing make me HUNGRY!  Excuse me while I go get something to chew :)

Looks like some decent food,, maybe better than the restaurant at Miramar.
The Peking duck looks nice and the vegetable dishes.
The variety of dishes is impressive
(compared with the aforementioned restaurant.)

Haha, CY, Glad you like you like the restaurant. I really miss the food there but I haven't been there for a while because I don't have a car to drive there......sad...