The Eyes Have It!

Isn't that what good photographer are all about? He/she should be able to SEE what others do not and react to what he sees and be able to freeze and capture that "slice of time", a slice of the moment that BELONGS to you!

A good photographer must be very sensitive to all sorts of things around him - light, emotion, objects, shapes, composition.

When situation arise he must be able to operate his camera like his second nature... an extension of his mind, his soul, if you like; no hesitation, decisive; instance! 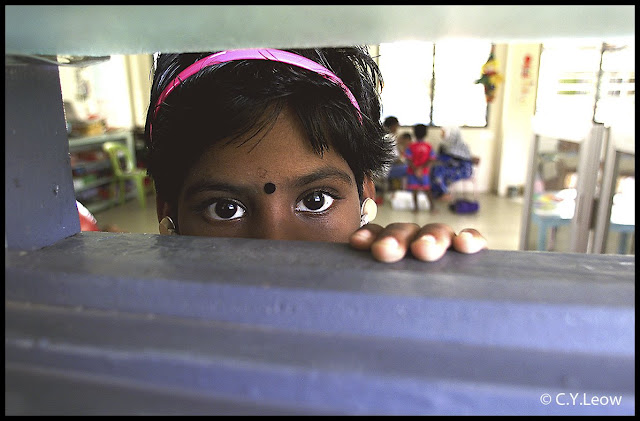 I was shooting a feature story at Bethany Home (Home for disadvantaged children) at Simpany Empat, Perak; Malaysia. I had a feeling that I was being "watch". I swung around and I saw these BIG white, beautiful eyes peeping through a classroom window....

Priya, sadly; cannot hear or talk, what was she thinking?

I had her picture brown up to 20X24" and paste it on the wall in my office room. I remember fondly that Steve Raymer, Indiana University professor and National Geographic photographer came a visit to The Star and he saw Priya's picture and said he like it very much.

In 1976, the National Press Photographers Association named Raymer "Magazine Photographer of the Year" – one of photojournalism's most coveted awards.

He has received a citation for excellence in foreign reporting from the Overseas Press Club and is a four-time winner of first-prize awards from the White House News Photographers' Association.

Raymer has lectured on photojournalism ethics and practice at universities in the United States, Russia, Poland, Malaysia, Singapore, and Vietnam.

Steve Raymer's book, "Living Faith: Inside the Muslim World of SE Asia," was published in 2001 by Asia Images Editions of Singapore.

Do your Eyes Have it?

Priya will be about 16 by now I think. Sad that shecant be integrated into a normal school and family like they do here.

After reading what you wrote re photography I have a question..wouldn`t there be more women than men who are sucessful photographers?

"A good photographer must be very sensitive to all sorts of things around him - light, emotion, objects, shapes, composition.''
Most men are not sensitive at all and they lack emotional intelligence,so it`s surprising to me to read that.

I read a while back that, "Men will continue to become
less dominant in every field as cultures evolve. The major reason that gals
have been "limited" in what they can do is a cultural bias that is rapidly
crumbling in some nations and that trend is spreading to others. The human
race cannot afford to ignore half of its talent."