I do not know why of all day I got the home sick blue today! May be it is the exceptionally cold winter day, may be it is time to take a trip back?

And I got the home sick blue...

Home, even after all these years of wandering; still feel like it is PENANG! Hey all you Penangnites out there, away from home; true or not?

To ease my blue, I thought I will post some of my Penang shots for all my island folks out there!


Easier said than done! Finding the images that is... Wish I had taken more of my home town! So here they are, after hours of blues killing search :-)

Where would Penang be without Francis Light? Taken in 1986 outside the Penang Museum, I wonder if it is still there watching the traffic go by? 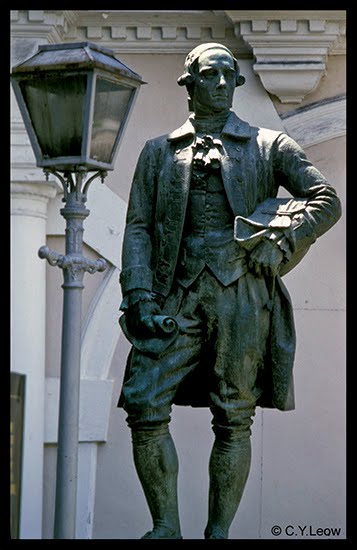 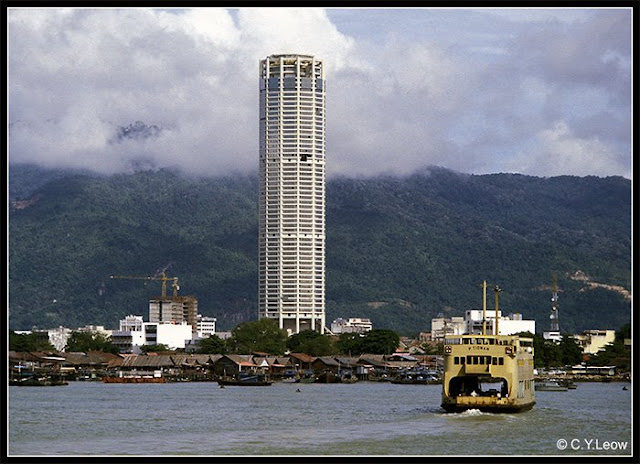 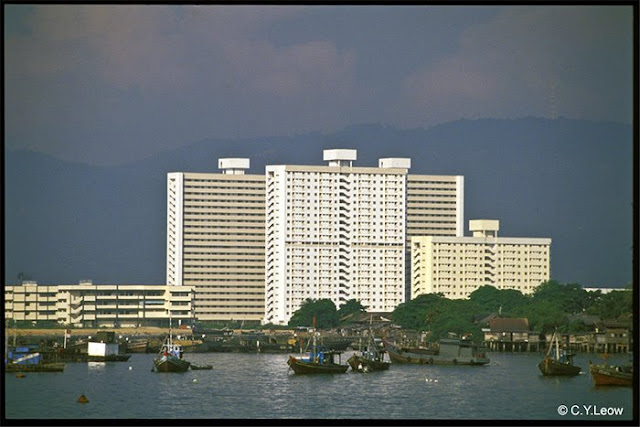 Circa 1987, I think; when these Noordin Street flats were still brand new... same camera, lens and film as above. 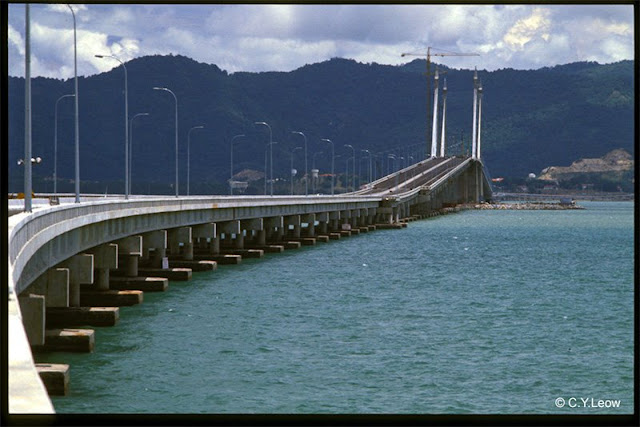 Shot in 1985, long before the Penang Bridge was opened to traffic; being in the media has its "perks"... we were allowed on the unfinished structure many time.

To enhanced the dragon like curve of the bridge, I shot with a 20mm on my F3P. It was at that time that I noticed an eagle has made himself a home on top of one of the mast. This shot was used in a two page spread in The Star, for their 28th National Day Special pull out. Take a look below. 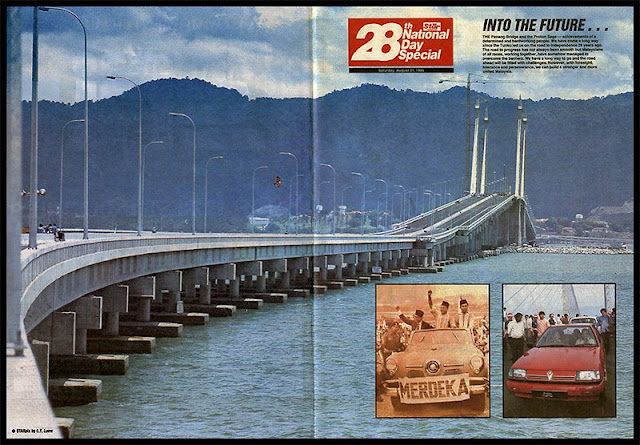 Stunning display of PHOTO POWER in 1985! You are wondering why the colour is still so brilliant?

Well, as far as I know there are only THREE copies of this spread left! They are in MINT condition, kept in my portfolio box all these years.... yes, they had as much travel as us!

From Penang to KL and back, then to Wellington, Singapore and back! I had them laminated 2 years ago... I now possess two copies.

I gave away one as a "getting to know you" present to a good friend. I hope he take good care of it :-) Because that is one "treasure" that even The Star museum DO NOT HAVE! 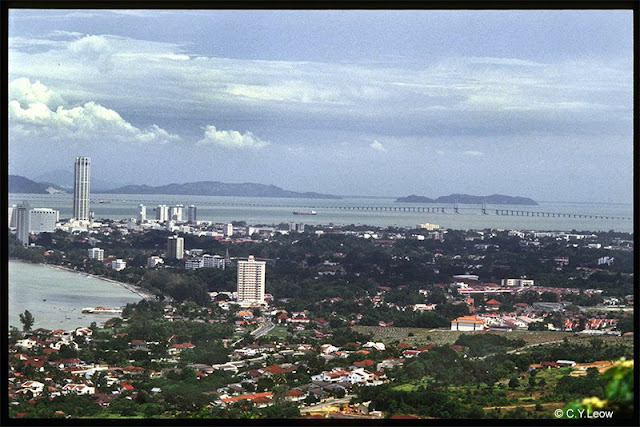 Shot from Mt Askin with my Leica M4-P and the 90mm f2 Summicron on Ektachrome, circa 1986; I think. Isn't Penang then SO CLEAN and GREEN? I would love to take a shot now to compare! 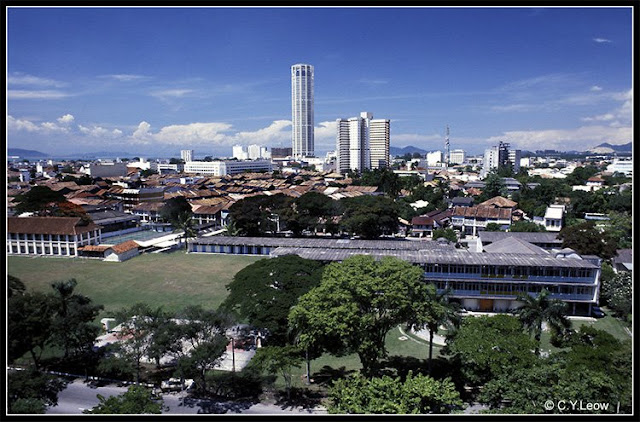 When the sky was BLUE and the air was oh so clean...

Shot through my room window of the Sunway Hotel in Love Lane where I was staying. Oh.. all those lovely food at Love Lane! Salivate!

This cityscape shot was done with a Canon EOS1 and the incredible 14mm super wide on Kodak Ektapress 200 film. 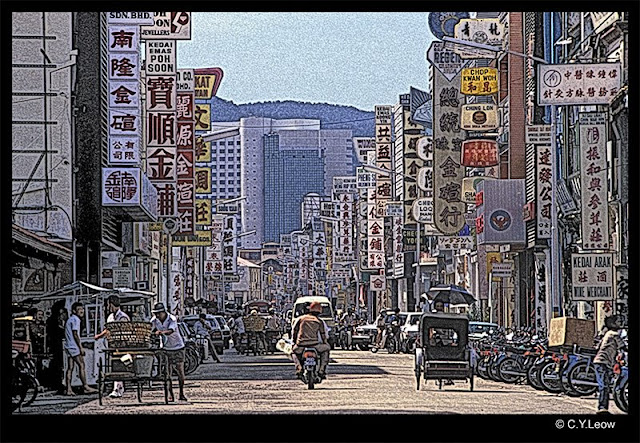 Arguably the most famous street in Penang, which tourist who had visited Penang do not know Campbell Street?

The negative was scanned with a Nikon 4000ED scanner and a Photoshop "draw" action was used to arrived at this painting like effect. 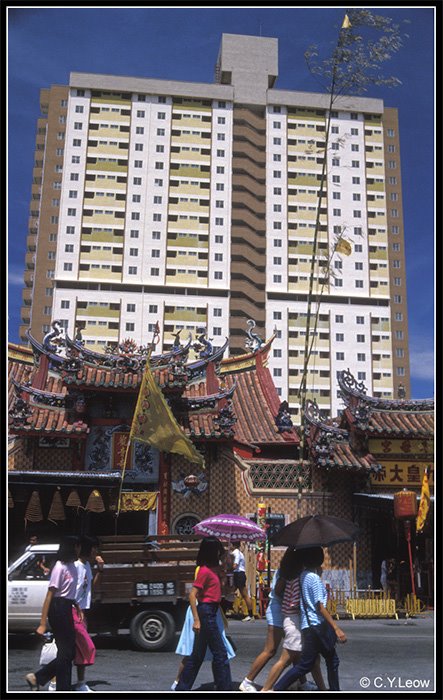 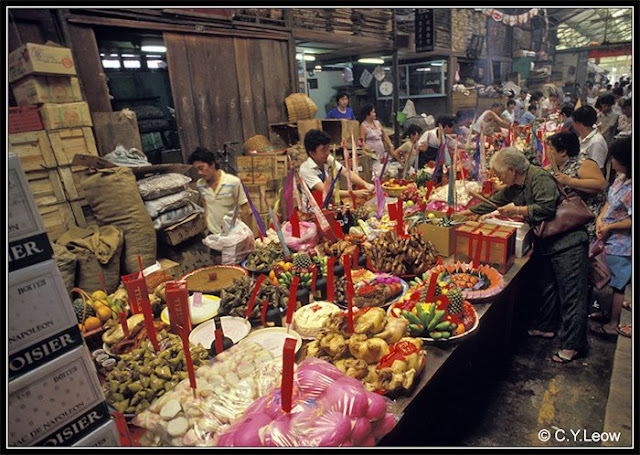 A scene that cannot be seen again... because this Nine Emperors Festival spread was at the Sia Boey Market! I recalled many fond memories there, shopping with my parent and having the market food there. Progress and tradition do not mix I suppose... sob :-(

This shot was taken without flash with my Leica M4P and the super compact and fast 35mm f1.4 Summilux lens on ISO 400 Ektachrome... a historical picture, I love this shot! 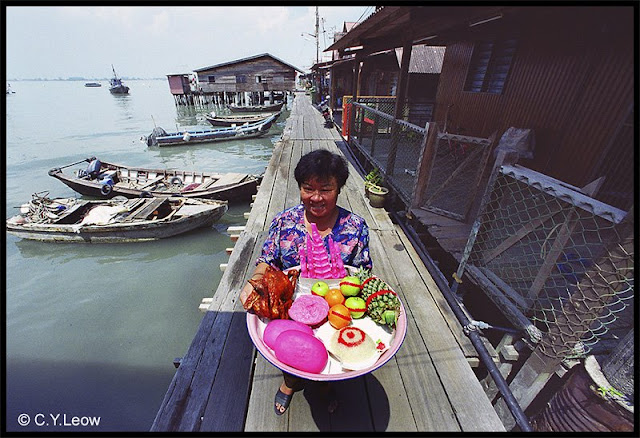 A traditional offering to the God of the sea during the Nine Emperor God festival in Penang. Local fishermen believe that the yearly ceremony will being them back safely from sea.

This shot was done for the book "Soul of Our Nation" published by The Star.

A ladder was used to get this shot with a Canon EOS1n and 14mm f2.8 lens on Kodak Ektapress 400 film. 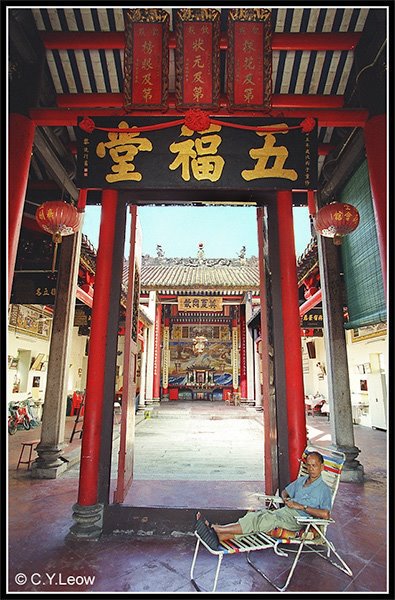 Was shooting the Penang leg of "Soul Of Our Nation" for The Star, this not very friendly "kongsi" guy was going to have his afternoon nap and from his expression I do not want to stick around for too long!

Did two quick grab shots, the strong afternoon sun virtually "wash" all the details in the yard. To balance the lighting inside and out, the negative was double scanned and detail restored in Photoshop. Canon EOS1n 14mm f2.8 lens on Kodak Ektapress 400 film.Circa 1998. 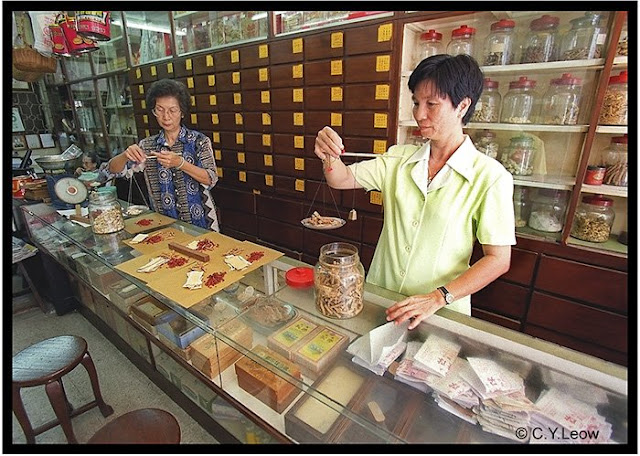 Another shot for the above mentioned book, same setup... the traditional Chinese medicine women are endangered species? The two sisters are operating a medical hall in Campbell street. 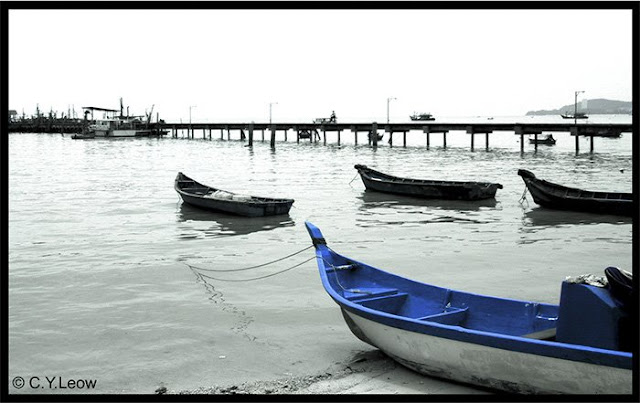 A very Penang scene at Teluk Pahang, Penang. The blue boat stood out from the rest. Shot with the tiny S10 Canon digital camera.

The digital image was interpolated with GF PrintPro. The background was desaturated in Photoshop then colour-fill with a 10% green . Circa 2000 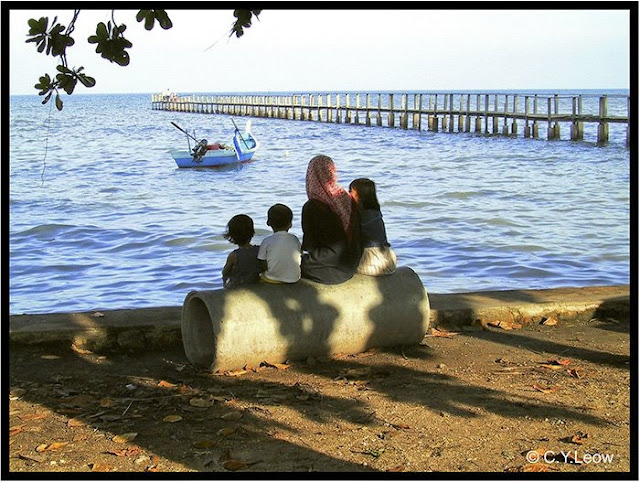 We were in Batu Maung, Penang for our seafood lunch; walked pass this classical Penang scene... I like the play of shadow on the family.

I only have the tiny Canon S10 digital camera with me, can only made good with one shot because the tiny flash card was full!

The relatively small digital file (6 MB) was interpolated with GF PrintPro. Circa 2000.

So there you are my friends, my Penang captures... after working for more than 5 years at the present archiving company here, and after scanning thousands of old negatives, glass plates and heritage prints... I should kick myself for not taking more shots of Penang while I was there!

So take my words all my Penang shutter-bugs, start capturing the daily lives of the island you love because no matter how simple and "unimportant" those shots are to you, they will be the only historical record of the life we all once treasured!

It MUST have been the cold weather because I felt exactly the same about my home town..homesick,except I am fortunate enough to go there twice a year and get hundreds of snaps.
The blue sky is surprising to me. I imagined it to be a yellowy haze. I don`t think it will be as blue these days.
Campbell street looks amazing!The quinessential Asian mecca for tourists and locals alike.It`s a shame it has such a ubiquitous,prosaic and culturally insenstive name .A name of local origin would have been more appropriate and less..err.. jarring?! I mean.. Campbells are a Scottish Highland clan, for heavens sake!! Grrrrr!!
Penang bridge. Surely one of the great bridges of the world.You could have written "CY WAZ HERE"..when you went on your "maiden" sortie on the bridge,as a marker for future generations of Leows.
I hope the traditional Chinese medicine women are not an endangered species.Amongst the proliferation of bloated, money hungry,greedy drug companies traditional Chinese medicine will prevail because it is a large pool of medical knowledge dating back to the New Stone Age over 10,000 years ago.
Rock on!!Take plenty of(dare I say it)...SNAPS!!on your next trip to Penang.

Somehow, where ever one maybe it's still Penang we come back to see. To walk along gurney drive, Beach Street and the beaches along Batu Ferringhi.

Somehow I think you got the wrong explanation to the women carrying the offerings.. it shouldn't be for the 9 emperor festival as it is strictly a vegetarian festival. The women is carrying a chicken :-)

Very observant, whoever you are :) I remember our writer said it was for the "God of the Sea".. is he vegetarian? ;)