The special effect packed movie remind me of my meddling with digital effect many years ago.

I wrote an article titled "Of Sky Fire, Think Outside the Square and Double-Scans", like the epic movie, I think it is time for me to repeat that article! 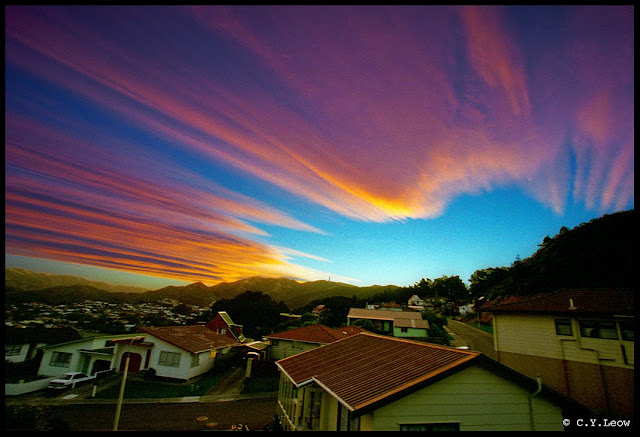 Sky Fire - May The Force Be With You!


I love this shot for its "Star War" like effect! I was working for The Star at the time, I shot this during one of my trip home to New Zealand , BEFORE I bought the D60 digital camera; which, was a blessing in disguise somehow. Tell you why later...

It was a clear winter dawn, I noticed this unique cloud formation outside my deck; I set up my EOS 1n and the 14 mm super-wide on a tripod waited for the sun to set. Hoping that the cloud formation will remain; they did! I got my shot.

Now, as you all knew in this situation; to record the full tonal range, you will have to expose for either the cloud or the houses below. The difference in exposure of the sky and houses are at least SEVEN stops apart!

To retain the intense colour, I exposed for the cloud. As expected, the negative was "thick" on the cloud and very "thin" on the landscape. This is one negative that no printer in the world can give a satisfactory print :-)

As a long time trainer for young photographers, in such situation; I always advised them to "think outside the square". I solved my problem by "Double Scans".

What then is "Double Scans"?

I devised this method in 1994 while I was working in Singapore Press Holdings.

I was asked to get a shot of the Singapore City Hall new million dollars "light up" for the paper's front page. I got the shot from a room at the Mandarin Hotel, same problem! The City Hall was very over exposed, the night skyline was under exposed and too dark.

There I was looking at my "shot" negative with my boss breathing down my neck screaming for front page picture! I had less than 90 minutes!

Four months before this I had set up my Mac workstation with a Kodak RFS 3520 scanner and Photoshop 5.0.... this is where thinking outside the square scored!

I muttered to myself, "why don't I do 4 scans and each scan optimising for different part of the scenes, Then I will "CUT" the scenes electronically and paste them together for a "balanced exposure" shot?"

I wish I can find a hi-res version to show you, one day... 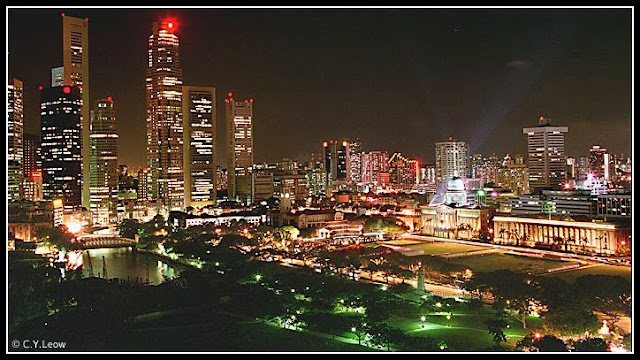 So "Multiple Scans" was born and I kept my Picture Editor job. Ha ha ha...

The picture also won me an internal award for the best news picture of the month. ;)

For "Sky Fire" I only have to scan TWICE in my Nikon ED4000 scanner. See below: 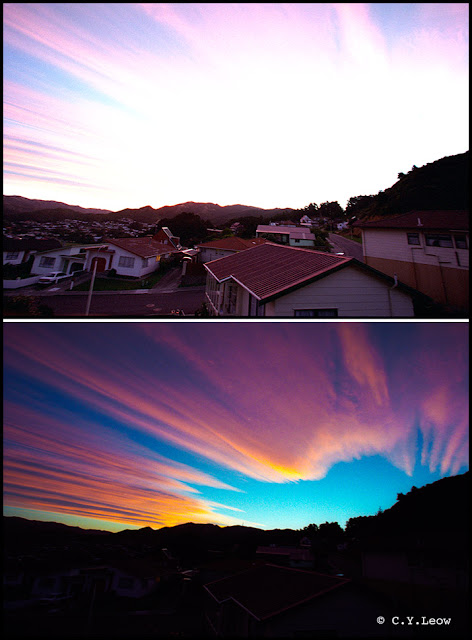 What next? You then "cut" the two "good" part and paste them together! DUH!

Coming back to the digital part, my question then was "Can the same effect be done with a digital camera?". At that time, 2001; I think not...

Mind you, this is all before the HDR craze!

"Very nice sky effect, The exposure latitude of film applies almost equally with digital.I doubt you will do any better with digital.Thanks to Photoshop,we can make some adjustments to make the differing contrasts look more realistic.

I don't understand why you did a double scan, when you have PS to do the work for you.
Was the difference between sky and ground so different that it warranted two scans?"

I do not agree with Nick, because if you under exposed your shadow area by FIVE stops and when you try to "lighten" the shadow detail, there will be digital noise galore!

As for the why two scans, I always try to get my exposure correctly adjusted IN THE SCAN to get the smoothest tonal range; believe you me, trying to adjust a under or over scans in Photoshop is NOT the same... try it yourself. Oh, I also prefer 16 bit per channel scan; why? That's another story :-)

Some of you might think the new "shadow and highlight" filter in Photoshop CS can achieve the same result? I love that filter (especially the CS4 version) and I use it a lot but NO it cannot give the same result.

And finally Steve Chong, himself a Master Malaysian photographer said:

"Hi Leow! This is absolutely stunning! Such amazing and dramatic sky you have captured! With the dynamic 14 mm lens the houses seems "pulled" by the clouds! Awesome! I don't even mind the slightly grainy sky!"

Happy "Double Scanning" and "Out Of The Square Thinking"!

Even if you didn`t make adjustments to the sunrise photo, I bet that somewhere in the world there is a sunset like this.There are amazing natural phenomena out there.Re the city photo,It seems a tall order to make something manmade look beautiful but your city photo is just how I imagine a city to be...a city of lights.A photo of Wellington would look nice done like that.
I did watch Star wars 3 and I was surprised that the special effects and costumes etc don`t look outdated.

If you watch Episode 4,5 & 6; you will realise the costumes and effects are SO OUTDATED! Just because Lucas thought he was clever by making 4,5,6 BEFORE 1,2,3! Duh! BIG MISTAKES!