We All Shoot Fireworks Don't We? 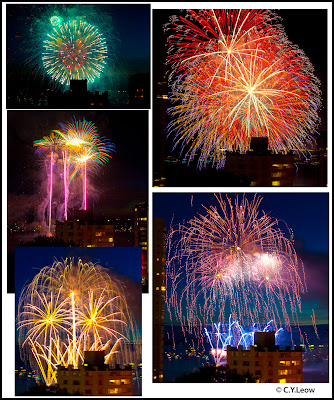 When I post this firework combo photo in Facebook to wish everyone a Happy 2013, I was happy that the photo received quite a few "like" from my FB friends :)

Location of the shots?

Beautiful city of Vancouver in Canada!

We were in Vancouver visiting our eldest daughter May-N, she and Lamont were staying in a very nice apartment over looking the English Bay. 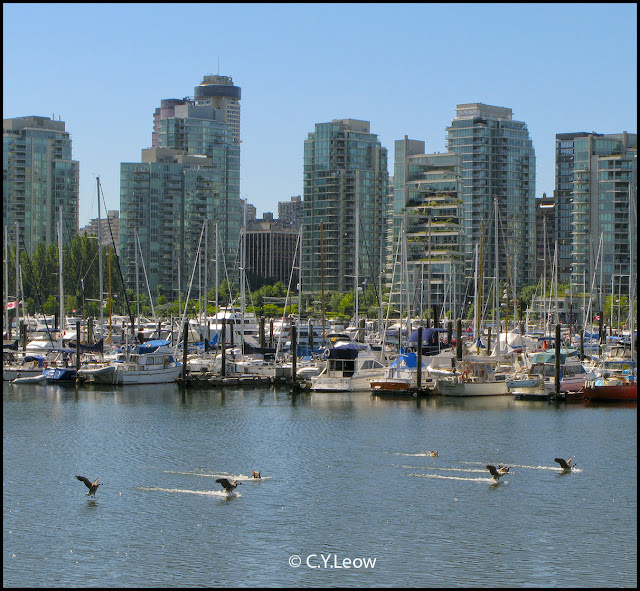 Apartments at English Bay view from Stanley Park, a stunningly beautiful park which is 10% larger than New York City's Central Park and almost half the size of London's Richmond Park. The park attracts an estimated eight million visitors every year,including locals and tourists, who come for its recreational facilities and its natural attributes. 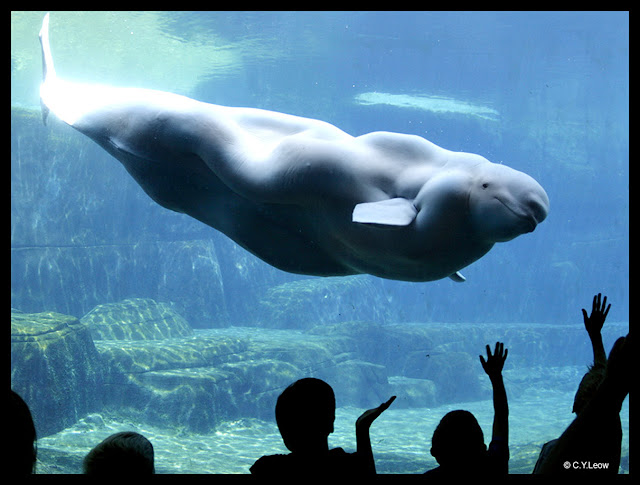 Vancouver Aquarium is situated in Stanley Park, the aquarium is a centre for marine research, conservation and marine animal rehabilitation.

You can see the amazing Beluga Whale at the aquarium!

Back to the fireworks....

Those amazing firework shots were taken on the verandah of an apartment overlooking the English Bay in Vancouver.

If you are a firework fan, nut; you should not miss this yearly July event known as the Celebration of Light!

"The Celebration of Light (formerly known as Benson & Hedges Symphony of Fire) is an annual musical fireworks competition in Vancouver, British Columbia, Canada. The first "Symphony of Fire" was held from July 25 to August 5 of 1990. The celebration is one of Vancouver's largest and most well known festivals. The multiple-day event has an estimated annual attendance of 1.4 million people."

Every year three countries (including Canada) will show off their best firework display to become the champion, to make life difficult for the firework master; their display have to sychronise and gel to a musical score he selected! You can hear the score live on the local radio station during the display!

When we were there in  2007, the finalists were Canada, Spain and Canada; Canada took the gold that year. 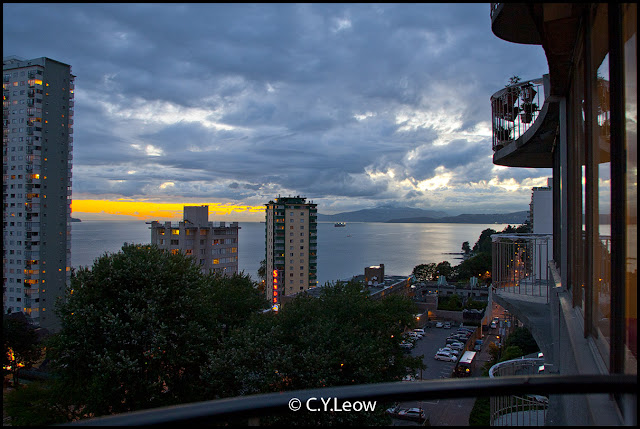 View from the apartment overlooking the bay where the firework will explode and wowed.

When we took this trip to visit May-N, I have no knowledge that such a world class firework display was in our itinerary! I was not well prepared ;)

Lucky for me, I brought along a small tripod and my faithful Manfrotto carbon monopod!  How then was I able to shoot video with my Canon G3 and stills on the Canon 30D with only one tripod? 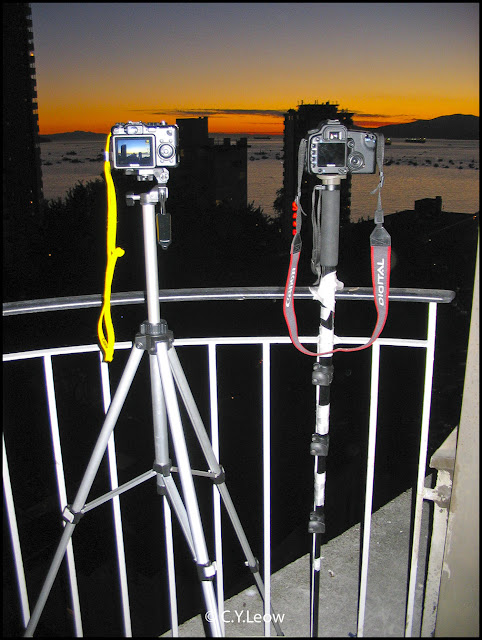 My "thinking out of the box" set up to capture the firework display, the little Canon G3 was on the tripod while the Canon 30D DSLR with the heavy 14-35 zoom was mounted on the monopod which was TAPED to the railing!

I do not have a shutter release for the 30D, I set the camera to manual exposure; f/8 and "B".

When I hear and see the firework go up; I open the shutter by pressing the release button and after 2 to 3 bursts of the display (8 to 12 seconds) I let go of the button and closed the shutter :)  The taped monopod did its job well, there were little camera shake!

If you are spending a lot of $$$ to photograph this event please bring along a good tripod and a cable release for your camera ;)

Below are some of the better shots taken at the festival. What are you waiting for? Start saving and make a trip to the Celebration of Light! 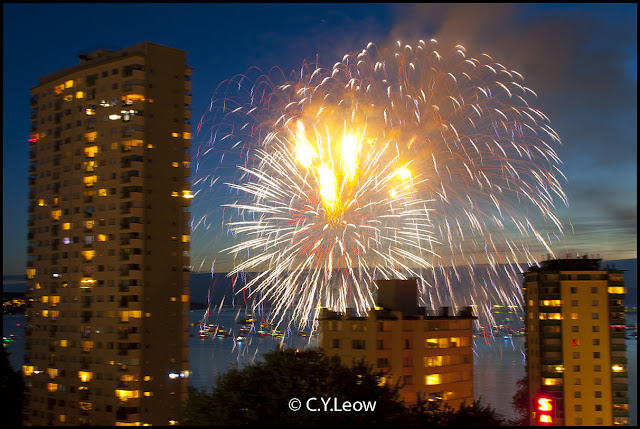 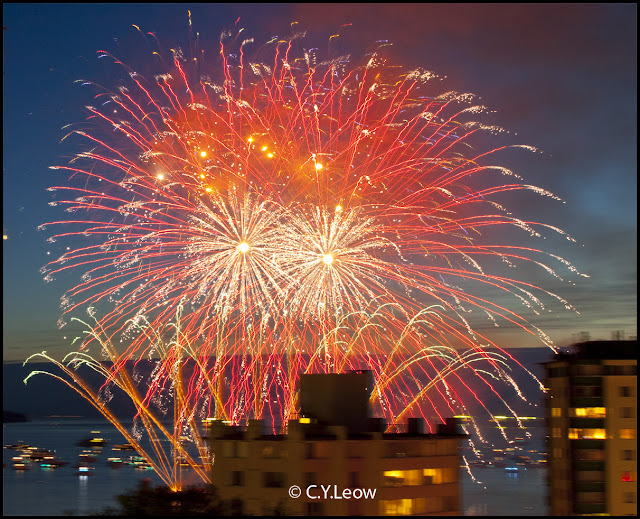 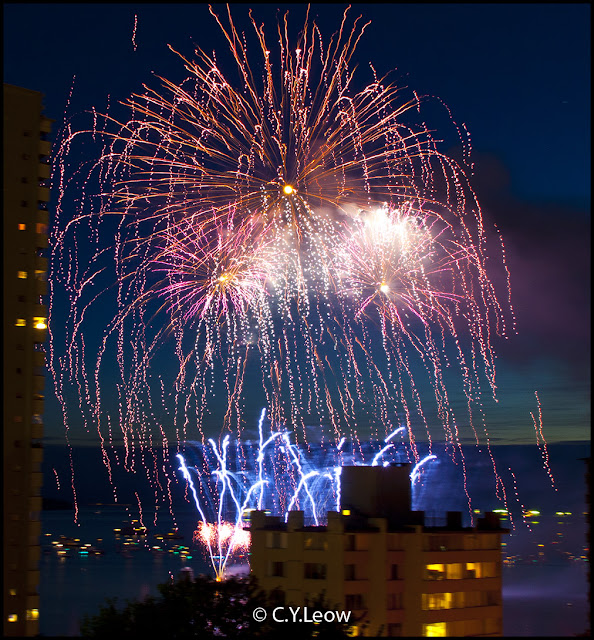 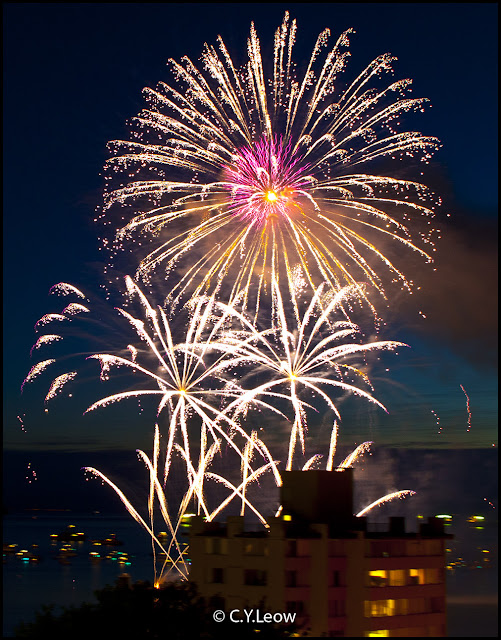 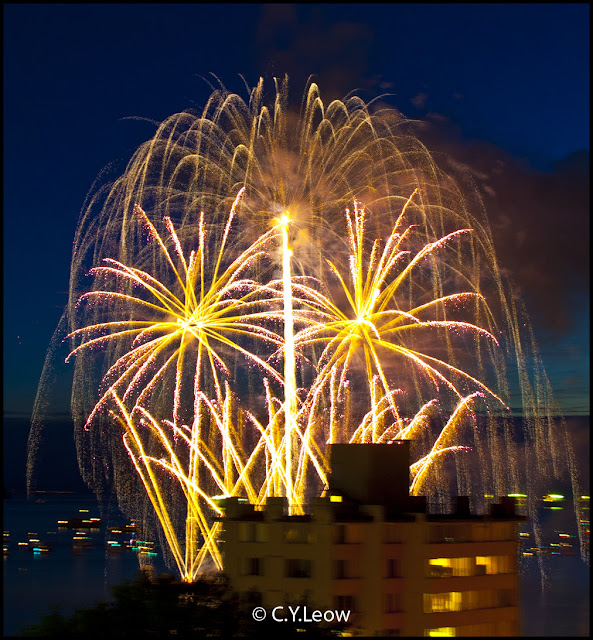 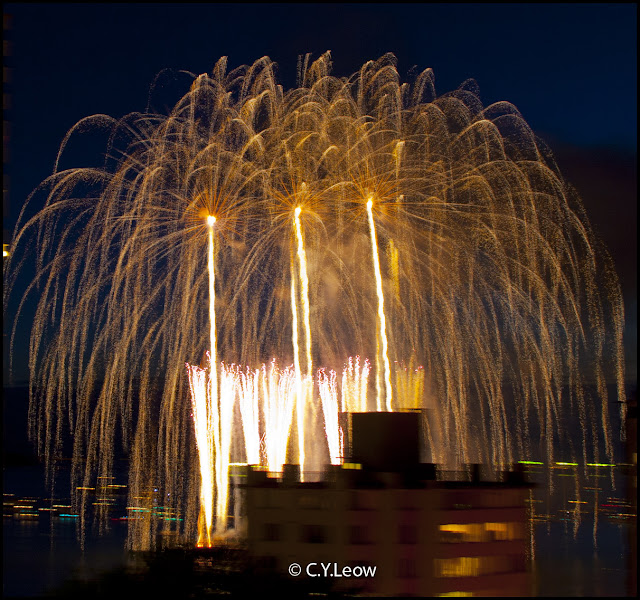 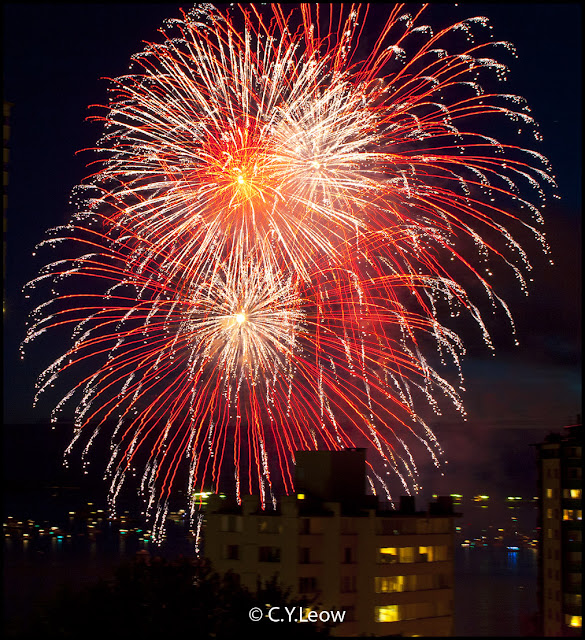 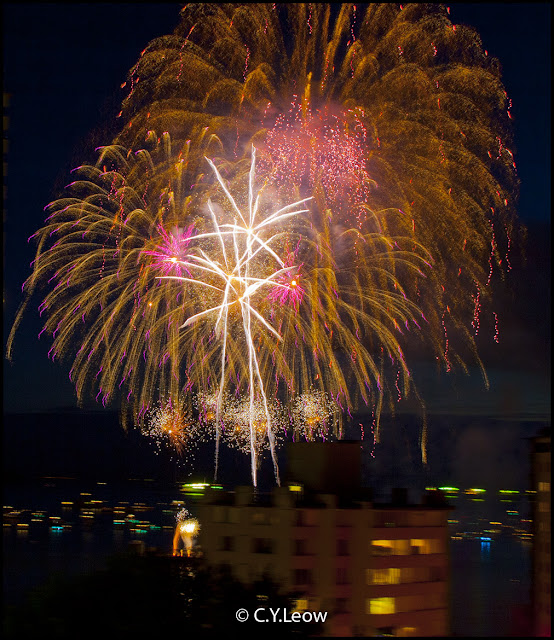 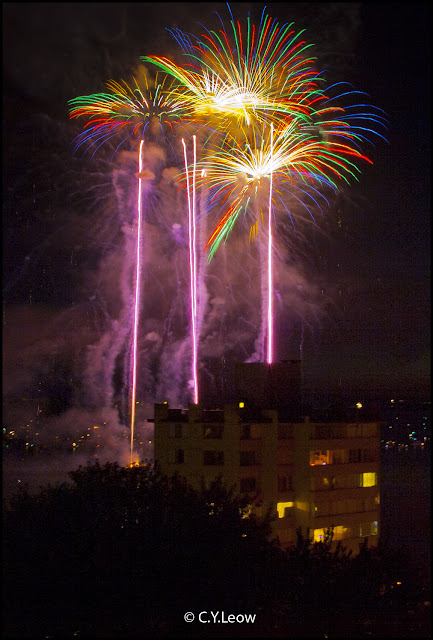 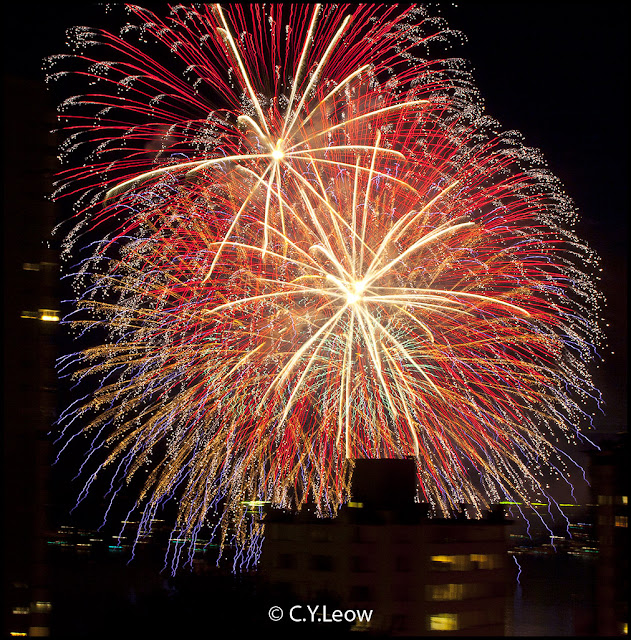 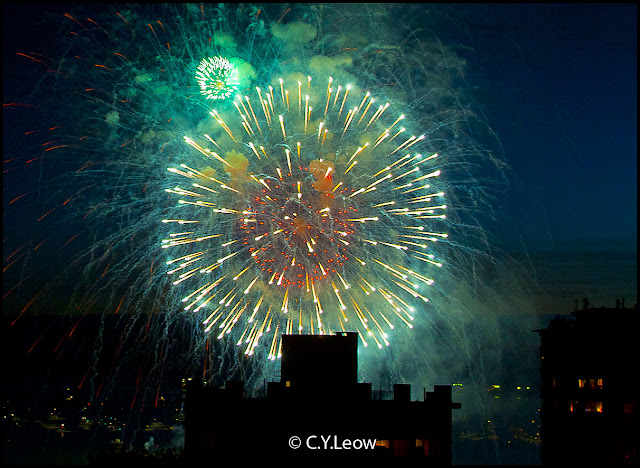 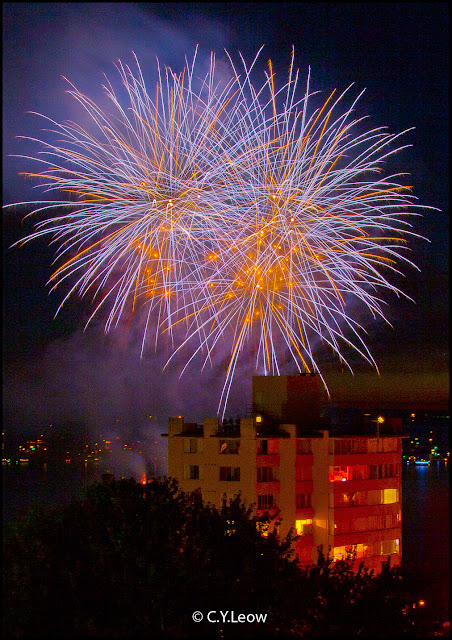