A kit lens is a "starter" lens which can be sold with an interchangeable-lens camera such as a single-lens reflex camera. It is generally an inexpensive lens priced at the lowest end of the manufacturer's range so as to not add much to a camera kit's price.

The two kit lens I am comparing here are: 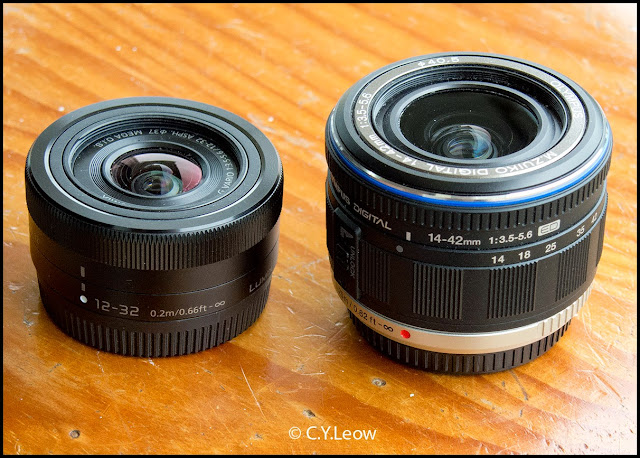 The two kits, Panasonic; left and Olympus, right. Both lens are in their "retracted" positions.  The new Pani for the GM1 is a lot smaller than the 3 year old M.Zuiko. 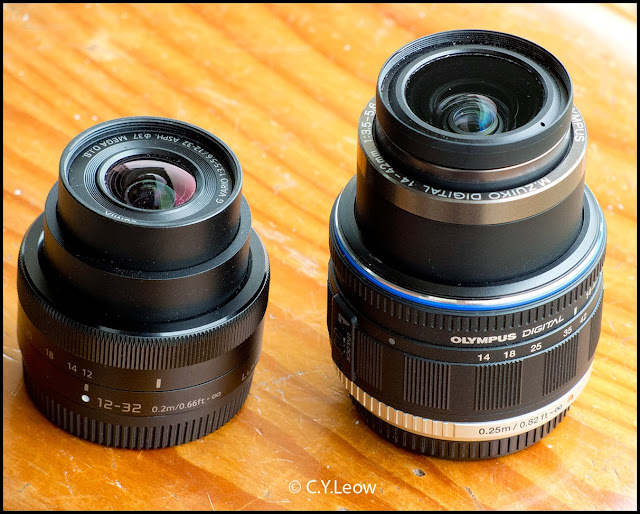 Both zoom lenses have to be "unlocked" and extended before they can function on M43 cameras, seen here in their extended positions.

The Olympus 14-42 was the world's first zoom lens with retractable mechanism design, the very compact 28-84 eqv. zoom contains 9 optical elements in 8 groups, two are aspherical lens and one each of ED and HR lens elements. 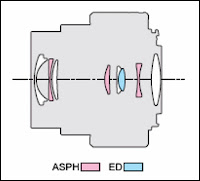 In comparison, the latest Panasonic 12-32 zoom consists of 8 elements in 6 groups, with 3 aspherical and one ED element.

Even though the Panasonic is much smaller than the Olympus, it contains the MEGA O.I.S. (Optical Image Stabilizer) - Panasonic's advanced camera-shake correction mechanism inside the lens barrel.

The wide angle coverage of the little Panasonic is also much wider, 24mm eqv. against 28mm of the Olympus.

Looking at the MTF charts of both lens, the little Lumix seems to be so much better in contrast and resolution than the bigger but older M.Zuiko Digital.

That is the motive of this exercise... 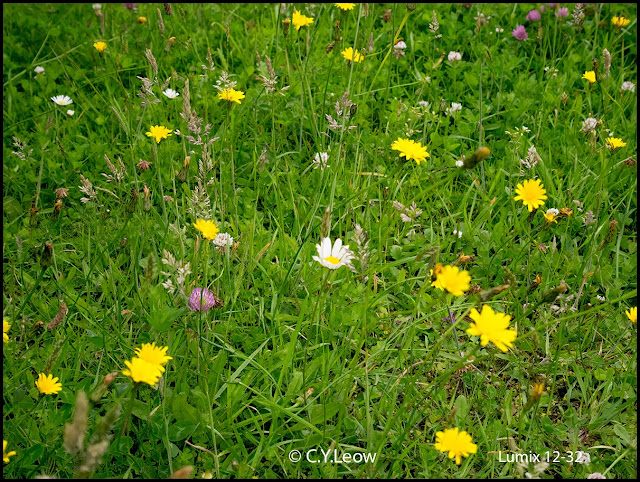 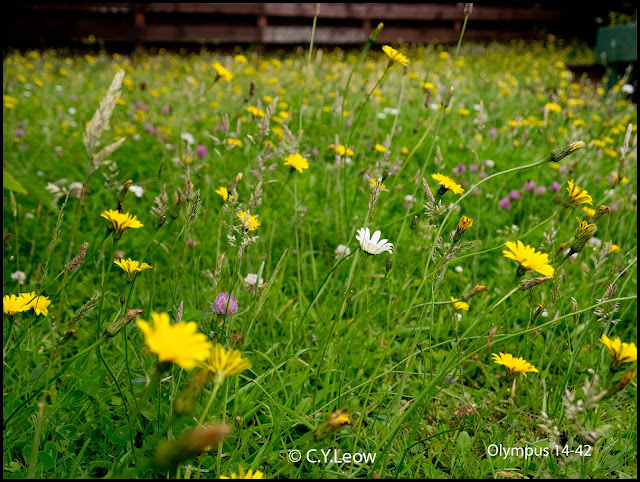 Just a random shot of our front lawn which needs mowing badly, it is turning into a field of daisies ;)  It seems to me the colour saturation of the little Lumix is better than the Olympus. 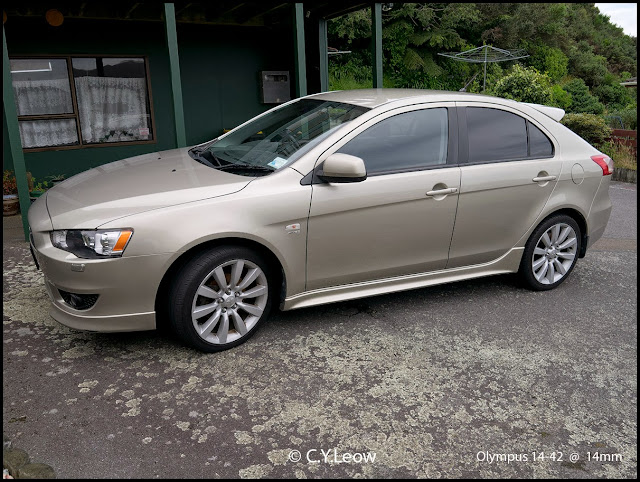 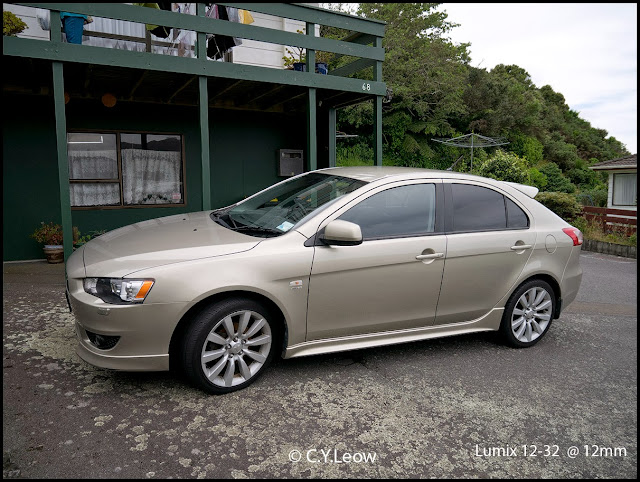 Before we get into my Lancer VRX, I took a shot at the same position; first with the Olympus at 14mm (28mm eqv), then with the Lumix at 12mm (24mm eqv). From the pictures you can see how much more the 24mm Lumix is able to take in! Like I said before, when you are travelling with a "less wide" lens; it can mean whether you are getting or not getting a shot you really wanted!

We went to a late "yum cha", this is one day of the year that we enjoy "yum cha" because the Wellington holiday crowds are still not back!  There are plenty of parking space, and we don't even have to queue and wait at our favorite restaurant! I adore our "silly season"!

After our leisure brunch, I swung round to my de facto lens test location which is 2 minutes away :) 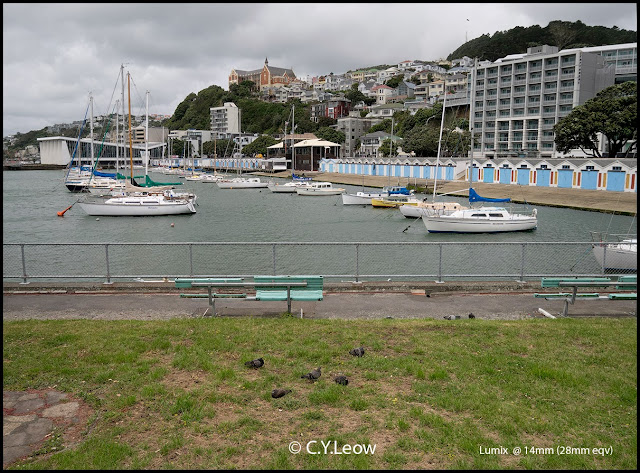 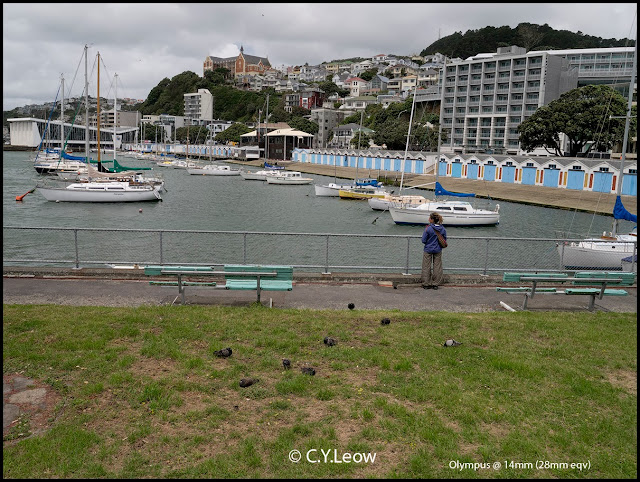 It was a cloudy and windy Wellington day, both lens was shot at 28mm eqv. You gotto compare apple with apple ;) Both files look quite similar, the Lumix have a little more contrast than the Olympus; which is 3 year older but holding up very well! The 100% crop shows the Lumix as a clear winner at 28mm eqv. It is sharper and resolving more shadow details than the 3 year old Olympus. 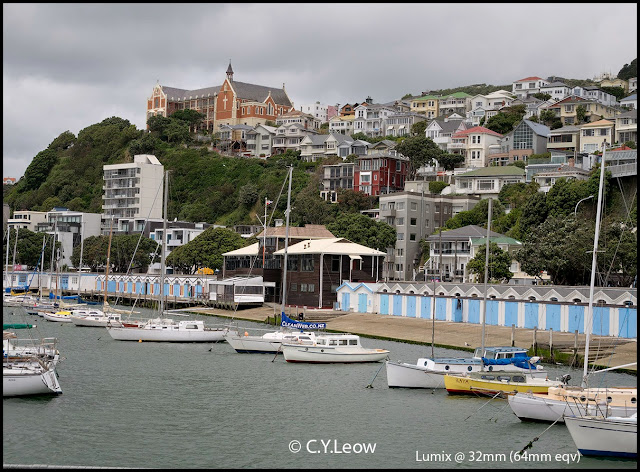 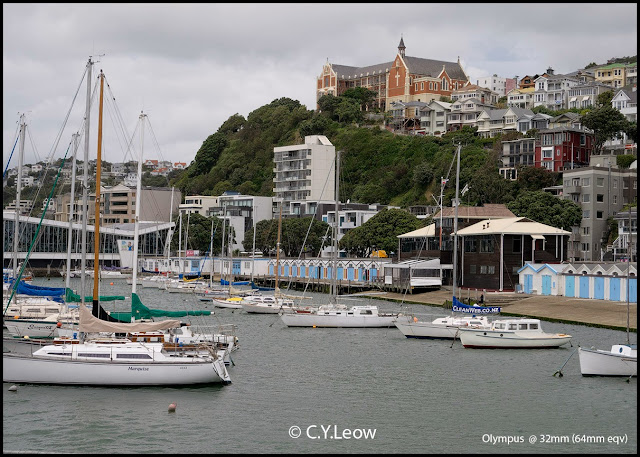 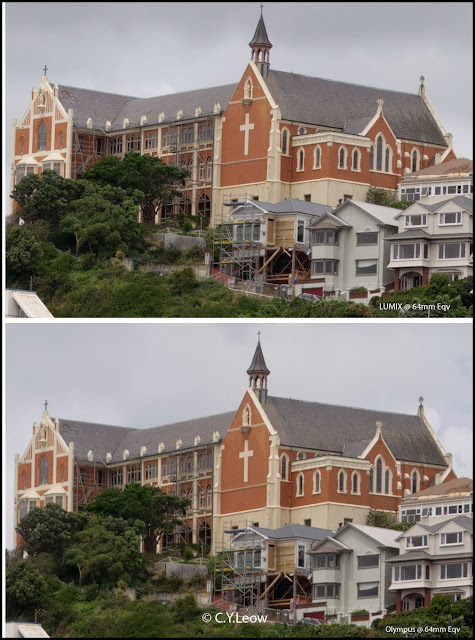 The 100% cut from both of 64mm eqv confirm that the Lumix is much sharper than the Olympus!

More confirmation... but please remember this is a really big blow-up of both pictures, the 3 year old Olympus no doubt loose out to the new kit on the block, but is still a very usable kit lens. 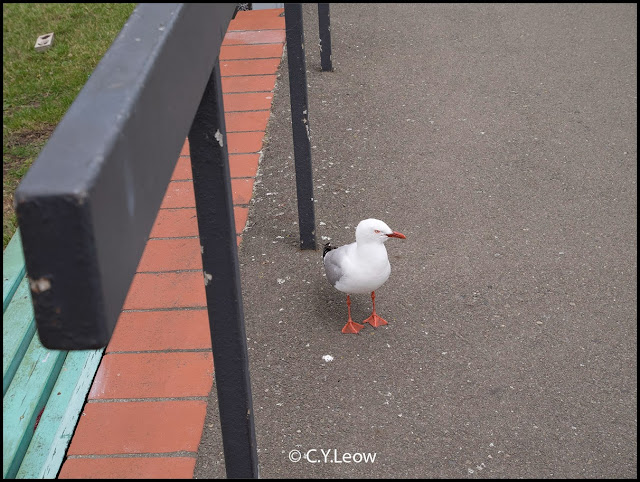 A curious NZ seagull was wondering what I was doing. I turn around and shot him/her with the Lumix kit lens at full 64mm eqv zoom... darn! I wish the zoom is much longer!  ;) 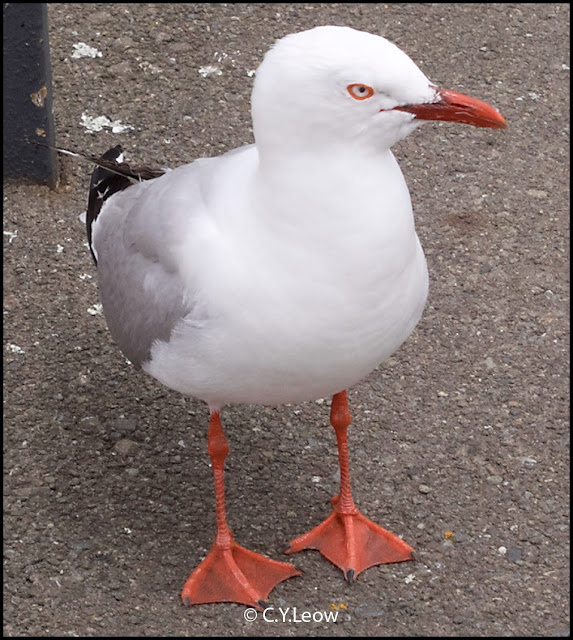 I was really floored by what Panasonic has created, in the shape of the world's smallest 24-64mm (equivalent) zoom lens!  I can see that this small gem going to be my favorite traveling lens!

Just found a site that did a very detail test and review of this Lumix zoom, go and take a look :) 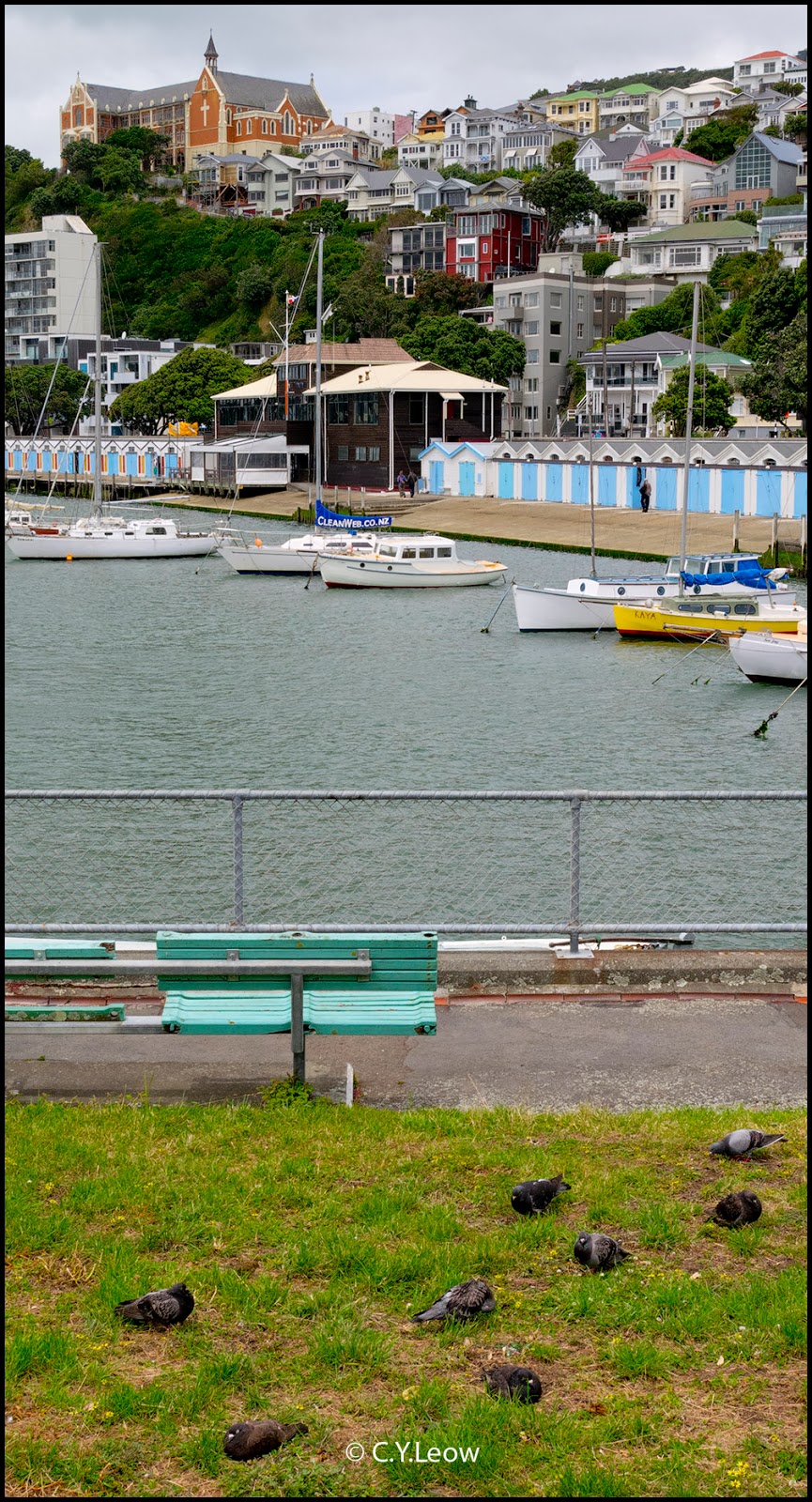