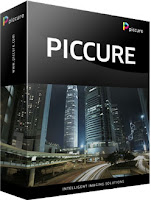 A few weeks ago, in a sneak preview; Adobe show off their upcoming Shake Reduction Tool for Photoshop that left us stunned. The tool selects part of the image, and used some complicated calculations to determine how the camera was shaking when the shot was taken, the tool then remove the blur — like MAGIC!!

Watch the demo video below.


But yesterday a SMALL startup company based in Tübingen, Germany; the Intelligent Imaging Solutions announced their new Photoshop plugin call Piccure and literally try to BEAT Adobe to this magical shake reduction launch! 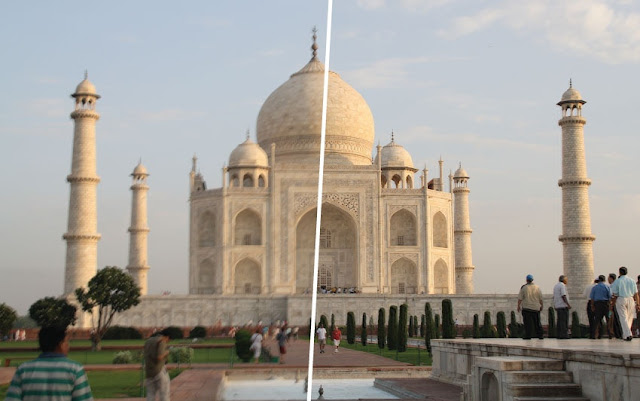 In their web site, they show off some before and after pictures what their PICCURE can do, they also claimed...

"Having problems holding your camera steady? Don’t want to use flash when facing difficult lighting situations? Don’t worry, piccure can help you.

In an easy-to-use plugin for Adobe Photoshop, piccure will allow you to restore your degraded photos produced by involuntary camera movements."

What they said about this little software sound very impressive...


"With a simple mouse-click it is now possible to remove camera shake from a single photo within a matter of seconds. Even better, you don’t need to worry about uploading your private images into the cloud: piccure runs locally on your machine.


piccure is a great tool for photography enthusiasts who love the crispest details in their images (micro-shake reduction), the photographers who just want to rescue blurry shots, as well as the photo forensics who want to recover information from heavily blurred images."

This I have to see for myself!

Luckily they offered a free download of a working (14 days) beta of PICCURE, I downloaded the Mac version, the plug-in installed into my Photoshop without problem.

Now to look for some blurred pictures with camera shakes!

After a few minutes in my archives, I gave up ;)  I must have thrashed all the blurred shots!  Do you keep yours??

Plan B, CREATE some! 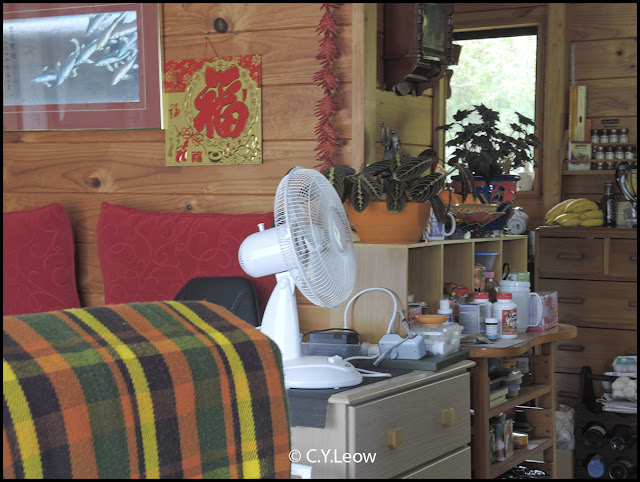 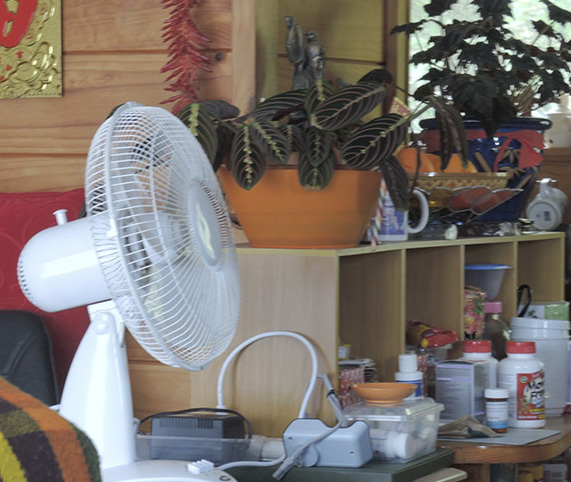 The image is not very sharp, the blur was caused by the slow 1/4 shutter speed. 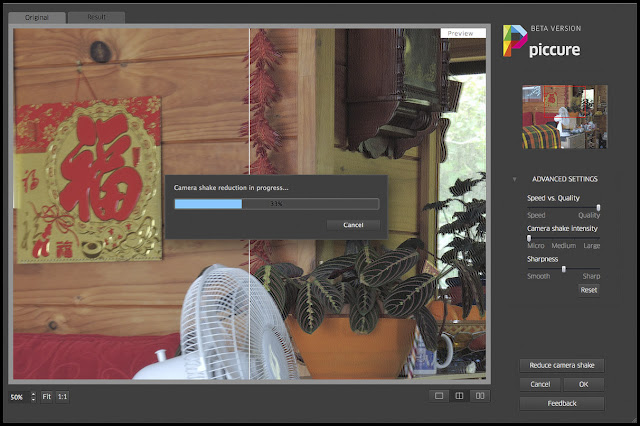 This is the PICCURE window, processing of the blurred picture in progress. You can adjust the quality, camera shake intensity and sharpness in the advanced settings.  The complete "how to" can be view HERE. 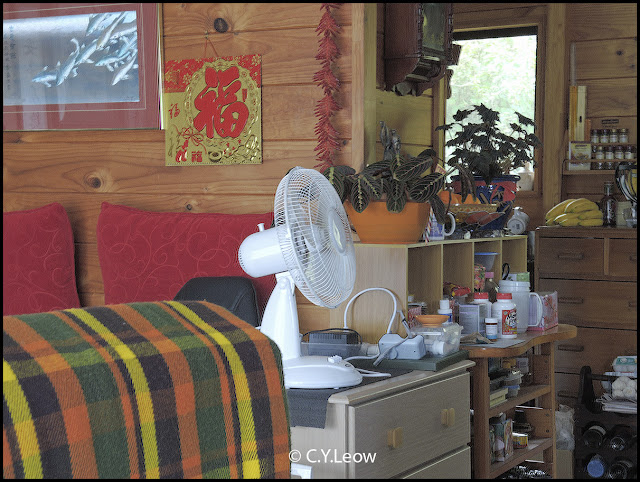 The processed and deblurred image, it look much sharper but when I zoom in... 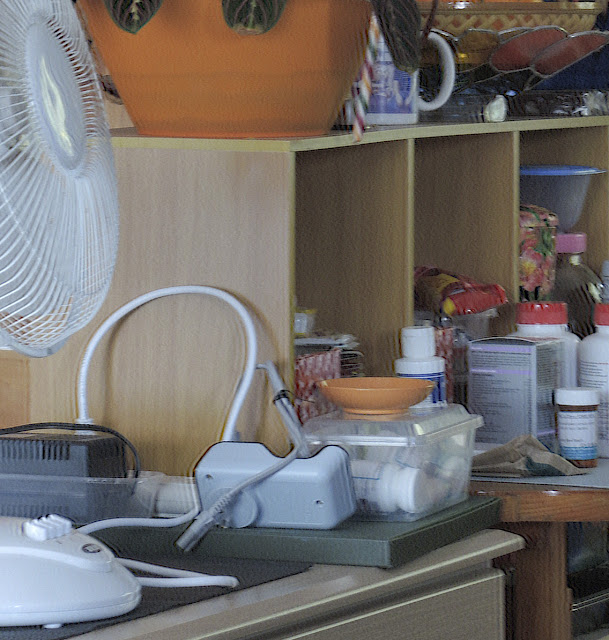 There are some disturbing artifacts around some of the objects!

After a few more try by adjusting the advanced settings... 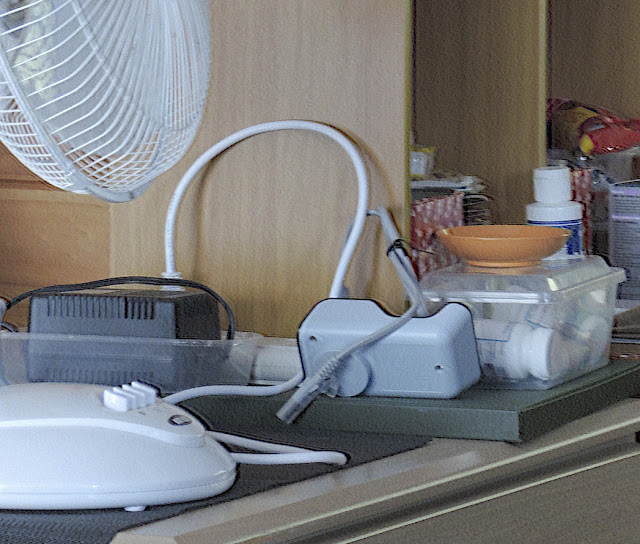 This is the best result after I cranked all the three levels in the advanced settings to maximum. There are still a little artifact,but I think it is acceptable.

Compare the before and after, below... 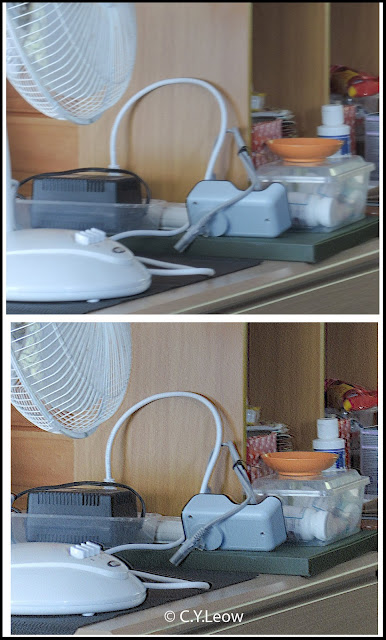 Is that impressive or what?  I was quite amazed what this PICCURE can do! 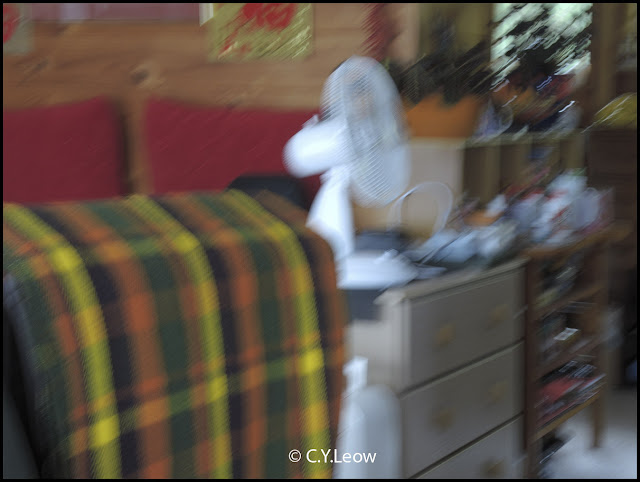 On the other hand, if your camera shake is THIS MUCH, no magic app is going to reclaim the sharpness!! Not even PICCURE ;) 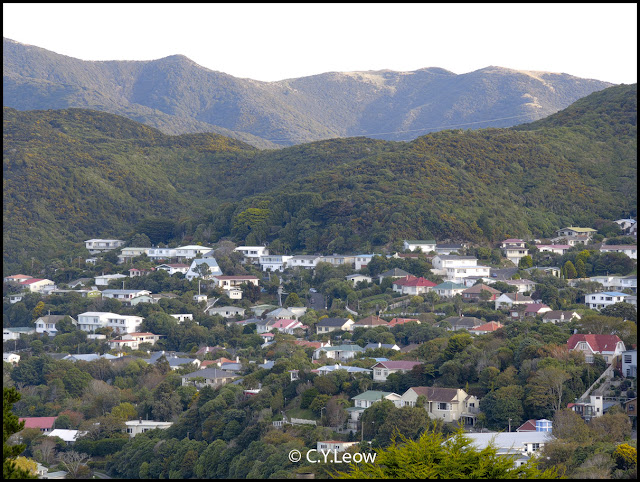 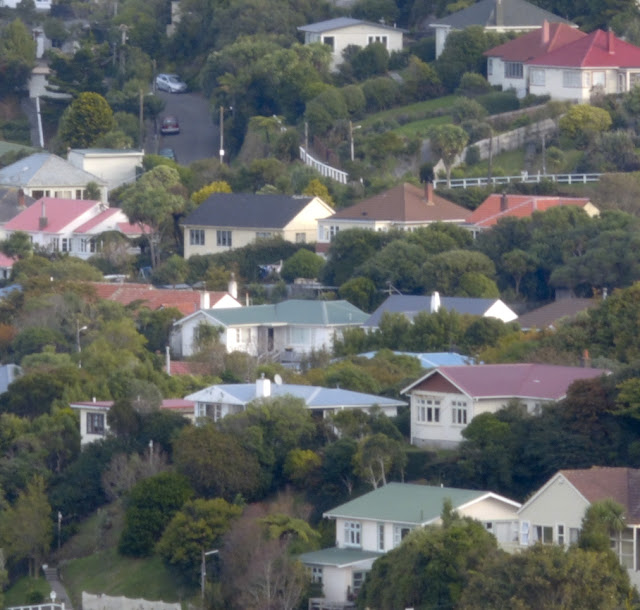 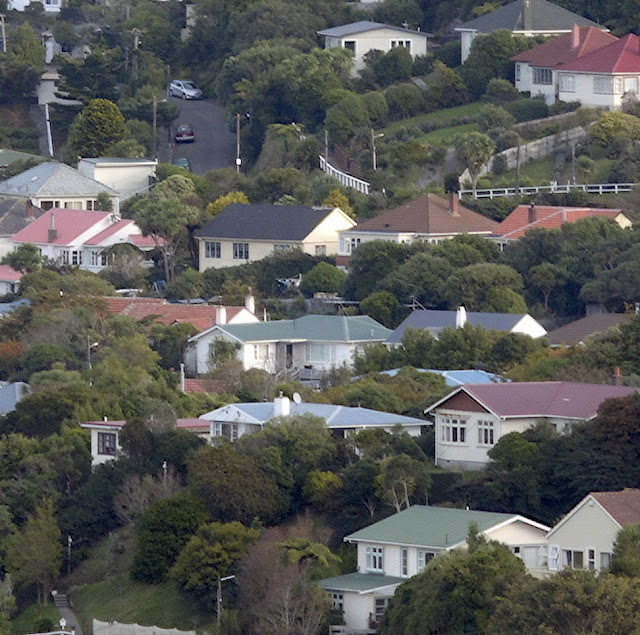 The same crop AFTER PICCURE  deblurring. The result was impressive!

But what if the same blurred cut is put through Photoshop CS5 Smart Sharpen? 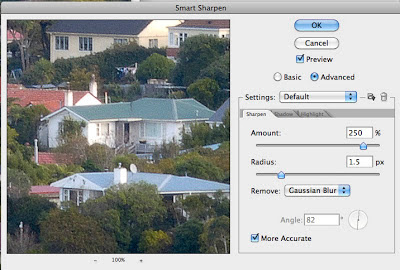 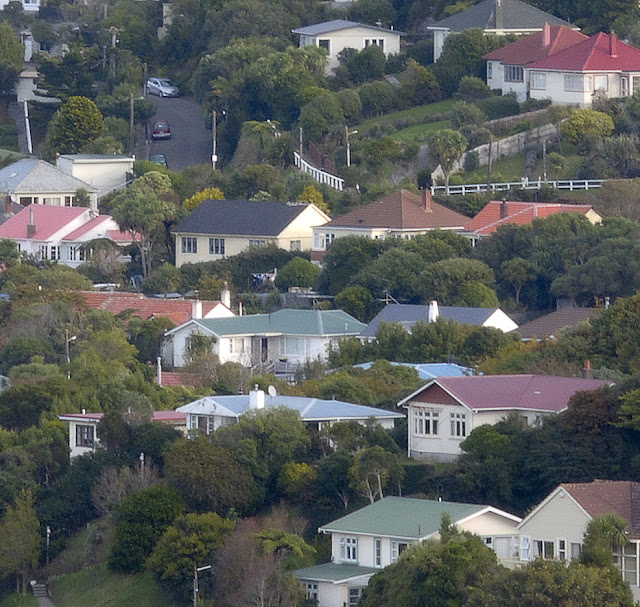 What do you know... with a setting of 250%, 1.5 radius and remove gaussian blur in Photoshop Smart Sharpen; I cannot believe that it looks better than what PICCURE did!

I concluded may be the blur in this picture was NOT camera shake but atmospheric haze, which Photoshop did a great job of removing?

Just to be sure, I went back to my first test picture; this is the crop... 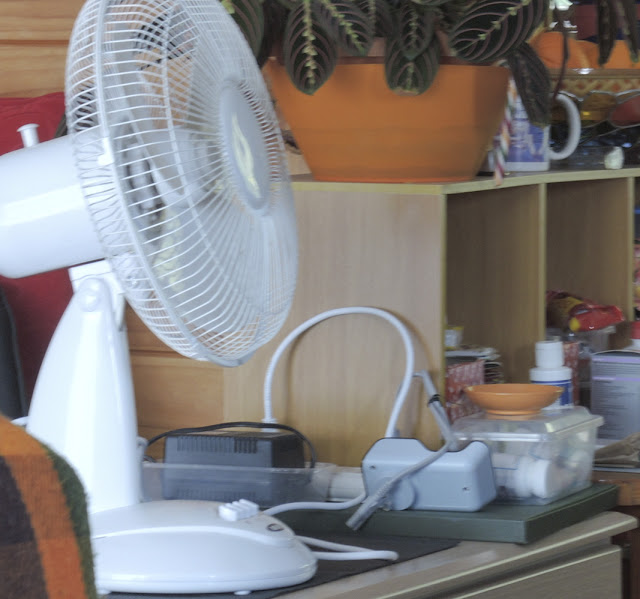 Shot with a slow 1/4 sec shutter speed, there was definitely quite a bit of camera shake!  Now lets put this through Photoshop CS5 Smart Sharpen... 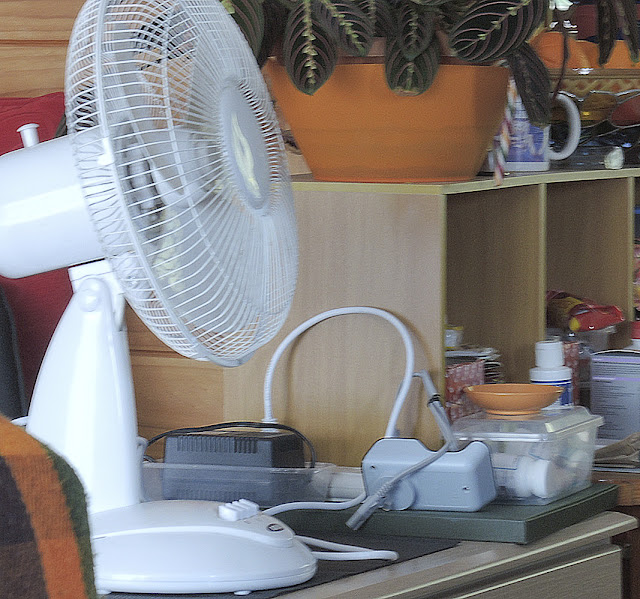 This was sharpened in PS CS5 Smart Sharpen with the same setting of 250%, 1.5 px and Remove Gaussian Blur. Wow... it looks GOOD!

Which bring us to this question...

Is PICCURE as good as they say?

I will email support@piccure.zendesk.com and wait for their response to report back to all of you.

We are added much functionality in this Remove object from photo and Remove BG from photo app like remover, clone stamp, background eraser, quick remover, transparent background and cloth remover.